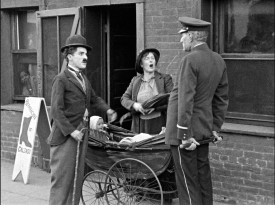 Bystanders appear frequently in the background of early films, a charming reminder of how the public witnessed the cinematic artform blossom, not only in theaters, but before their very eyes on the streets where they were made. The young girls caught on camera intently watching Charlie Chaplin through a window while he filmed The Kid (1921) (read more HERE) remains an all-time favorite discovery. Since Buster Keaton filmed so frequently on real streets, it’s not surprising onlookers appear throughout his films too. While there are many more, here are a few of the brazen bystanders to appear with Keaton in Cops (1922). 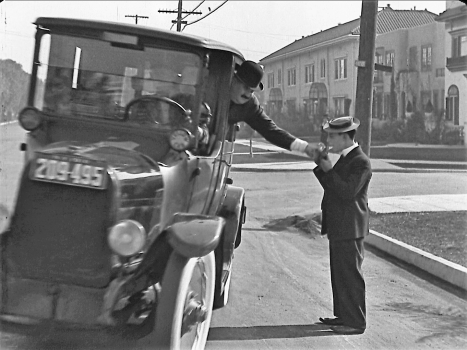 Buster’s encounter assisting Big Joe Roberts into a taxi, and pocketing his wallet, was filmed both in the late afternoon beside 590 N. Vermont (reported HERE), and in the early morning, above, miles away beside 7130 W. Sunset (reported HERE) looking east. Frozen in place, a woman stands unnoticed directly behind Buster at the corner of Sunset and Detroit to witness Joe retrieve his wallet, but not his cash.

View east along Sunset at left – click to enlarge – Buster staged the wallet scene at the lower left street corner, just a short block from the Chaplin Studio – notice the giant tent for filming The Circus. The studio corner lawn with a diagonal driveway beside the tennis court is where Chaplin posed with dogs making The Idle Class (1921) as reported HERE. 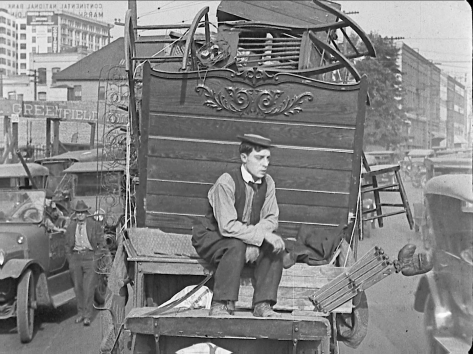 As Buster sets off with his wagon of furniture, passing the Aaron Greenfield auto wrecking yard once sited at 1019 S. Los Angeles Street, this intriguing fellow nonchalantly strolls alongside, hands in pants pockets, tie tucked between his shirt buttons. The extant Marsh Strong Building at 9th and Main, with signage for the Continental National Bank, appears to the upper left, while the buildings to the right are long demolished.

Lurking in doorways, left, heading south past the former Pioneer Lumber Co. at 1626 Cosmo in Hollywood, and heading west along 10th (now Olympic) past the side of the former E. A. Featherstone Auto Supplies Store at 958-960 S. Los Angeles St.

An army of police sneaks up behind Buster on New High Street beside the original Hall of Records Building (1911-1973) to the right, before the Civic Center was completely rebuilt, with a crowd of spectators sitting on the wall. The twin lampposts on the wall flank a sidewalk tunnel entrance into the former County Courthouse off camera further right. The landmark LA City Hall, later opening in 1928, would be built on the site to the left. Watching closely you’ll notice bystanders hunched down hiding beside almost every parked car, while the man standing between the cars at the far right even pops his head up like a gopher to stare at the camera.

Here’s a matching full view west down New High from Temple Street revealing the Hall of Records at back and the corner Court House (1891-1932). Jeffrey Castel de Oro first discovered this locale. I find it astounding Buster’s scene played out in full view of these towering public buildings, now all gone, yet only a hint of the buildings appear onscreen. The crenelated tower of the former Los Angeles Times Building at 1st and Broadway (reported HERE) appears furthest back, while the former International Bank Building, the true skyscraper Bill Strother climbs for the long view shots appearing in Harold Lloyd’s Safety Last! (1923), stands to the left.

Buster staged this scene near the Rutland Apartments at 1839 S. Main (reported HERE). Cops is Buster’s only film with no interior scenes, staged at four different backlots and all across Los Angeles. I have identified essentially every scene in the movie.

Buster heads east on Sunset at Detroit while a repairman works the wires and a curious child sits at the corner. The palm trees, and massive tree at back are on Syd Chaplin’s front lawn – he lived at the large home on the Sunset/La Brea corner that came with Chaplin’s studio property.

I find these bystanders endearing. You can imagine them running home to tell their families over dinner the excitement of watching Buster make a movie. Their presence reminds us of the romance of early Hollywood, when production standards were more relaxed, while confirming that when audiences are captivated by a well-told story they are immune to background distractions. Captured forever, the anonymous images of these curious onlookers will live on at the fringe of film history.

Charlie, Buster, and Harold each filmed a masterpiece at an alley you can still visit today. Please help support naming the alley by posting a review on Google Maps. Prototype alley sign design by noted Dutch graphic artist – Piet Schreuders. Download a 4-page brochure about the alley HERE. This video further explains the alley – if you can, please leave a thumbs up and share it with others.

A matching view east of the corner of Sunset and Detroit. The vintage corner building has since been demolished.