Newlywed Harold’s day is shattered when his better half calls to ask “hubby dear” to pick up a “few things for dinner” on the way home. Already overwhelmed with packages, lucky Harold wins the store raffle, a free live turkey we’ll call Tom. Harold and Tom somehow board a crowded trolley.

Sherlock’s assistant Gillette (played by Ford West) pulls Buster over at 220 S Lucerne, a block to the south, behind from where Murphy is supposedly spying on them. More incongruous, the shot including all three actors (left), as Buster leaps onto the bike and they ride off, was filmed several blocks away, north of Beverly looking south down Larchmont.

Buster and Gillette take off north along the same route as the Hot Water turkey trolley, passing the same 162 S Lucerne home appearing with Harold. In all a dozen homes along S Lucerne appear with Buster and Gillette (numbers 158 to 256, although sometimes edited out of sequence) during their Lucerne ride. Of course, no sooner do they begin then Gillette immediately falls off of the bike (as reported HERE), leaving Buster unaware no one is driving. The scene was shot looking east along Eleanor from the corner of the Keaton Studio at Lillian Way (right), with Buster performing the fall for Ford West as his stunt double. 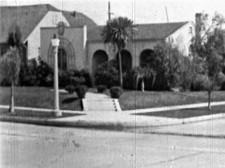 As with many homes on N Beachwood appearing in Hot Water (see prior post) 162 S Lucerne has been remodeled, its three-arch open porch now enclosed for more floor space. The home stands on the NE corner of W 2d, just west of Larchmont, close to where Harold filmed other Hot Water scenes. The corner home appears in other silent comedies, at left in the Charles King 1926 comedy Please Excuse Me. Harold’s trolley passes by many other Larchmont-area homes during the lengthy scene, which remain to be documented. As expected, fussy Tom wrecks havoc, upsetting all the passengers.

Fed up, the conductors toss

Harold and Tom off the trolley, filmed looking west on Sunset Blvd approximately near Ogden Dr. As solved by historian and frequent contributor Paul Ayers, this single track Pacific Electric line ran on Sunset between Gardner Jct. and Laurel Canyon Blvd. from 1911 to 1924. Perhaps the line had already closed when Harold filmed here. Also looking west, the frame at right from the 1919 Lyons & Moran comedy Waiting at the Church (also HERE) shows matching tree and ridge lines, and even the same house with a white chimney to the right. Working with the Library of Congress Michael Aus has made these entertaining, little-known Lyons & Moran films available to eager fans. Visit his eBay listing, and his full eBay store of silent films, where the sale proceeds benefit the Niles Essanay Silent Film Museum.

Thrown from the trolley, as Harold leads Tom home, a distinctive broad building appears behind them. The curved details at the left reminded me of another scene from Sherlock Jr., where driverless Buster blissfully races west down Beverly from Larchmont toward the Wilshire Country Club. Buster’s scene is noteworthy, not only for his stuntwork, but for the rare photo depiction of the front of the club.

Buster cycles west along Beverly past Larchmont towards the prominent, rarely photographed front of the Wilshire Country Club at back.

Click to enlarge – matching details, the curve of the road, and more details below confirm the Wilshire Country Club appears behind Harold. As reported in The Larchmont Chronicle celebrating the club’s 2019 centennial, the original club house was demolished in 1971, its replacement demolished in 2001, and the resulting third clubhouse was further remodeled in 2008.

Caption from the Wilshire Country Club’s history page “The original Clubhouse completed in 1922 on the corner of Rossmore Ave. and Temple Street, which became Beverly Blvd. upon its construction through the golf course in 1924.” Given the dense foliage, this photo was taken well after Buster and Harold filmed here in 1924.

Matching views looking west of Harold and Tom walking along Beverly Dr from the near corner of S Arden Blvd, and the Rossmore corner of the Wilshire County Club one block further back.

Once the Wilshire Country Club crossed my radar, it suddenly became clear this odd street pattern to the left during Harold’s family car excursion shows the corner of the club, north up Rossmore from Beverly, with the club’s driveway traffic islands behind Harold, and the club parking lot to the right across the street. Narrow white posts outline the club parking lot in both images. See aerial view below.

Buster filmed Sherlock Jr. all around this neighborhood too. Here are just two of his many scenes matched to the same photo.

I again want to thank Zebra 3, a self-described film location hobbyist reporting on IMDb, for sharing all the locations he discovered as reported in this prior Harold’s Hot Water, Happy Days post. His insights prompted me to revisit Hot Water, resulting in this Part 2 post.

I now have TEN videos on my YouTube Channel. To learn more about Sherlock, check out Case Closed – How Buster Keaton Made Sherlock Jr.

Below, where Harold and Buster filmed at 162 S Lucerne