I just discovered where Keaton filmed a scene from Cops (1922), as Big Joe Roberts retrieves his wallet from Buster (but not its cash contents) by leaning out to grab it from a passing taxi.  The scene was filmed at the corner of Sunset and Detroit, a block diagonally from the Chaplin Studio.

One apartment appearing in the scene is (momentarily) still standing, but I found online that a demolition permit for the building was issued just last week, on May 24, 2013.  [Update: the building site was completely demolished in early September.] The view looks east down Sunset from Detroit. The yellow oval marks the trees along Sunset in front of the mansion, north of the Chaplin Studio on La Brea, where Charlie’s brother Syd resided.

Click to enlarge. The red box and yellow oval match the above movie frame. The blue oval is a small real estate office, see below.  The Chaplin Studio backlot shows a tent built for Chaplin’s 1928 feature The Circus 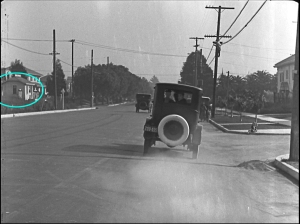 Buster rides off with Joe’s taxi and cash.  Notice the little girl watching, sitting on the corner, and the telephone lineman above her. The corner real estate office (blue oval) appears in the aerial view above.

The apartment at 7130 W. Sunset Blvd. will not be standing much longer, but perhaps some Keaton fan in the Hollywood area could dash over and take some photos before it disappears.

This is the first time in 15 years that I have become aware of a location at the same time its demolition was imminent.

Thank you for any help –
John Bengtson

PS – no matter what, I love the fact that Buster filmed this scene around the corner from the Chaplin Studio!  Some how knowing this makes me appreciate Cops, Charlie, and Buster all the more.

UPDATE: As shown below, these two scenes with Joe’s wallet were filmed miles apart, here at Sunset and Detroit, and at the Bergstrom estate at 590 N. Vermont, where Harry Houdini filmed The Grim Game in 1919.

15 Responses to Keaton location to be demolished – photo help?