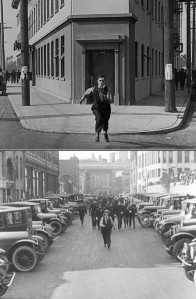 I’m delighted to host guest blogger Jeffrey Castel de Oro’s amazing post regarding the early California history appearing in Buster Keaton’s The Scarecrow. A friend for 20 years, Jeff has contributed many significant locations and photographs to all of my books, including at left two of my favorite of his discoveries, both scenes from Keaton’s Cops – the triangle building that proved to be the former USC College of Dentistry Building, and a scene in the downtown Civic Center on long lost New High Street, in the shadow of the former Hall of Records Building and County Court House. Take it away – Jeff.

A true adobe – looking SE towards the Baldwin Hills.

In the 1920 short film The Scarecrow Buster Keaton’s farmhand character, on the run from a dog he has mistakenly assumed to be rabid, is pursued to a small house made of adobe bricks. After a frantic chase diving in and out the doors and windows Buster climbs a ladder to escape. The dog (portrayed by Luke, who was owned by Buster’s good friend Roscoe Arbuckle) amazingly also climbs the ladder, and the chase continues perilously atop the crumbling walls of the roofless structure. 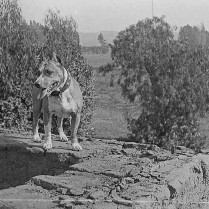 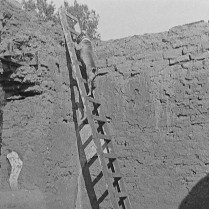 Due to its scale, density and realistic level of detail, it appears that the adobe depicted in The Scarecrow was an actual found location rather than a set specifically constructed for the scene. In the 1920s there were still remnants of adobe structures on existing farmland, dating back to large land grants given by the Mexican government to encourage settlement of its territory and the use of the land as ranches (ranchos) for raising cattle and sheep. After California became a state in 1850, a series of setbacks beset the rancheros, including a decline in cattle prices, floods and drought. Forced to take out loans, and often unable to read the contracts they signed due to a lack of formal education, grantees began to gradually lose their land.

This 1888 map illustrates a period of transition, after the arrival of the railroad began to dramatically increase the population of Southern California and the still-recognizable ranchos were being divided into smaller and smaller tracts. 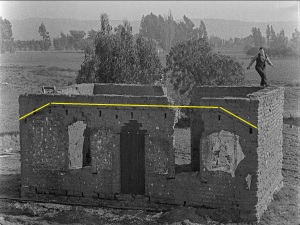 Having some familiarity with areas in which Buster Keaton likely filmed, I focused my search on the former rancho areas located on the west side of Los Angeles. There are a few clues to how the house must have looked. The joist holes above the door and windows indicate a porch roof that pitched downward on either end. Additional holes along the base indicate a front porch. 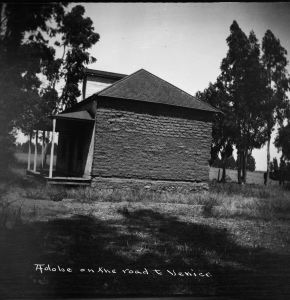 This photo entitled “Adobe on the road to Venice” taken by Los Angeles historian and amateur photographer George W. Hazard is currently housed at the Huntington Library. It was recently made available online as part of the Ernest Marquez Collection. The Huntington estimates that the photograph was taken between 1890 and 1908, the years that George W. Hazard was active as a photographer. Enhancing the porch area reveals structural details matching those suggested by the film frame, most notably the porch roof pitched downward at each end.

Also visible in the film frame are numerous large white rocks embedded in the adobe bricks. By carefully examining the location of these rocks among the pattern of the bricks, comparing them to a closeup of the George Hazard photo, and accounting for some years of weathering, it is possible to definitively match the two structures. 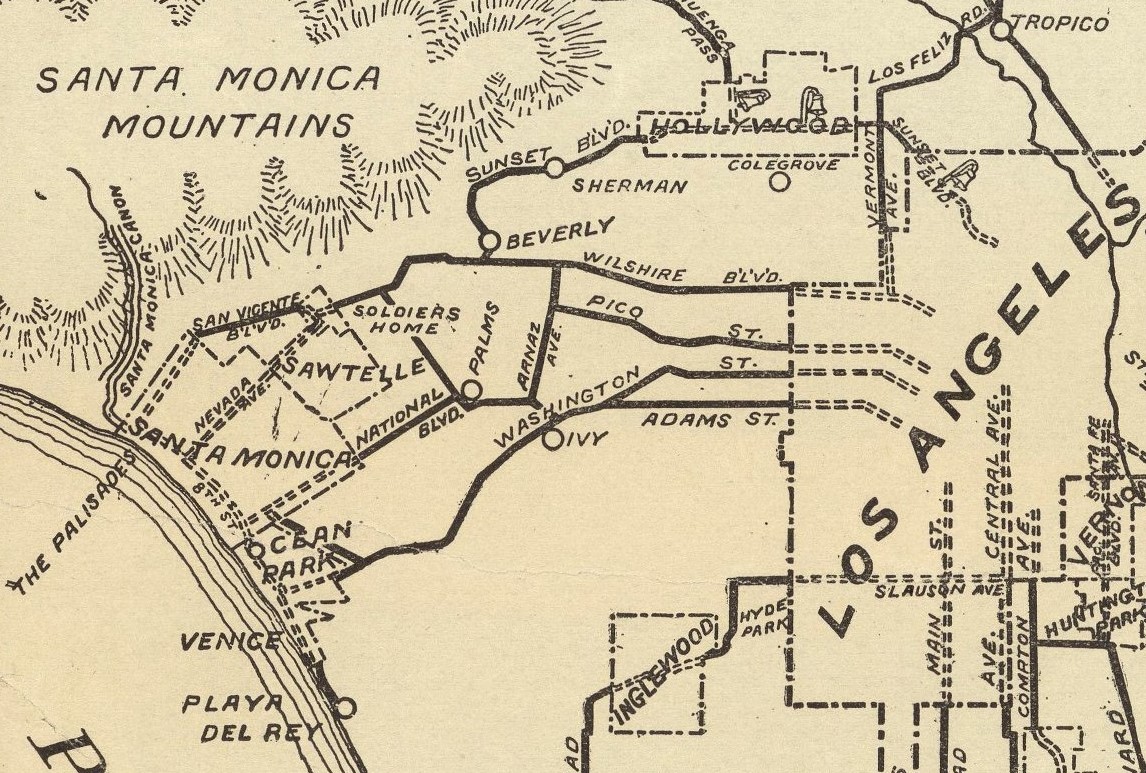 The inscription of the Hazard photo “Adobe on the road to Venice” provides a starting point to locate the house. At the time the photo was taken (as late as 1908) there were very few roads leading directly to Venice. The only prominent route to Venice visible on this 1909 travel map is Washington St. (now Blvd.). David Rumsey Map Collection. 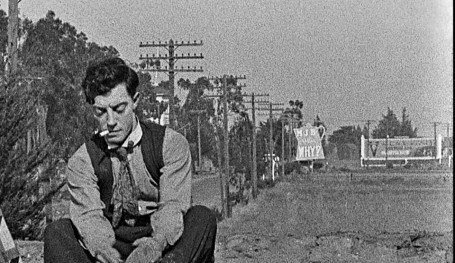 But where exactly on the road to Venice was the adobe located? Just above Buster’s shoulder in this movie frame, where the road bends to the right, can be glimpsed a tall white structure amongst the trees. It features a tower topped with a flagpole or spire, a triangular roof, and a pattern of large windows or openings just below the roof. A full length view of the three-story structure appears between Buster’s legs as he falls over backwards (at the time nearby Culver City had only two-story buildings). Notice too the prominent “MJB Coffee – Why?” coffee pot billboard in the background, a curious advertising campaign that helped to solve John’s prior post about a small Japanese enclave living in Hollywood.

The original La Ballona School (above) located along the bend of Washington Blvd. features details which match the building in the movie frame precisely (see comparison inset). LAPL. It stood from 1865 to 1927 and has been rebuilt twice. A modern elementary school still stands at the location, marked as Historic Site #10 by the Culver City Historical Society in 2001.

This 1921 aerial view looking west across Culver City towards the ocean features the Hal Roach Studios and adjoining Henry Lehrman Studios (yellow oval), the Thomas H. Ince Studios (red oval), and the Goldwyn Studios (green oval), which would become MGM in 1924. Washington Blvd. runs diagonally through the image past the four studios before zig-zagging on its way towards Venice, its canals visible in the upper right corner as a set of 4 parallel vertical lines near the beach (blue oval). Marc Wanamaker – Bison Archives.

La Ballona School (yellow oval) stood to the right (north) of the bend of Washington Blvd. pictured above in this 1921 view. By zooming in on the area surrounding this bend we can see the likely location of the adobe, perhaps indicated by a lone round tree on the south side of the street (red arrow). Since the adobe stood close to the road, it may have already been demolished in this 1921 view. 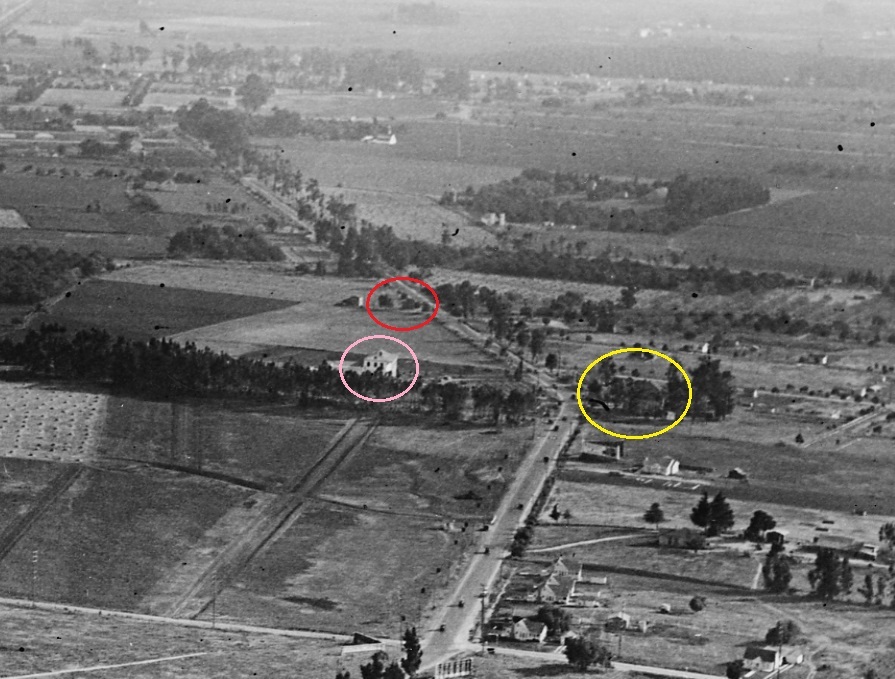 A closer and clearer view taken in 1925 reveals the likely site for the adobe (red oval) apparently now demolished, related to the school at the bend in the road (yellow oval). Marc Wanamaker – Bison Archives. Just below it stands the Plantation Café (pink oval). Built in 1922 by a former vaudevillian and restaurateur named Mike Lyman and his partner V. B. Clark., it would later be purchased by Roscoe Arbuckle in 1928, the same year Buster Keaton would join MGM.

A final view shows the area as it appeared in 1927. Marc Wanamaker – Bison Archives. The adobe is apparently gone, the farms further subdivided with numerous houses visible. The La Ballona School (orange oval) has been rebuilt, while the Plantation Café (purple oval) remains standing across the street. Nearby can be seen the Culver City Rollerdrome (light blue circle), a large indoor skating arena also visible in Laurel and Hardy’s County Hospital (1932). The Rollerdrome site will soon be marked as Historic Site #14 by the Culver City Historical Society. 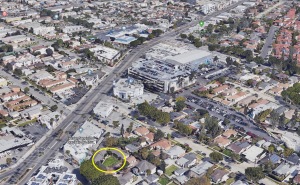 This view from Google Earth looking NE shows the contemporary La Ballona Elementary School at the bend of Washington Blvd. Across the street at the former location of the Plantation Café now stands a large NFL Network facility. The location of the adobe was approximately the patch of green grass (yellow circle) near 4018 Tilden Avenue.

A former visual effects artist, Jeffrey Castel de Oro is an amateur historian, genealogist, and hopeful professional archivist, who has been a Buster Keaton fan since first seeing Kevin Brownlow’s documentary A Hard Act to Follow on PBS in 1987. You can follow Jeff on Twitter @jeffcdo. Thank you Jeff for sharing your amazing discovery – yet another example of our common history preserved in the background of silent film.