Buster Keaton filmed dozens of scenes beside or adjacent to his small studio at Lillian Way and Eleanor. In a surprising new discovery, the corner of his studio actually appears during a scene from Seven Chances (1925) as Buster jogs up Vine Street, and stumbles upon the mob of angry jilted brides who were chasing him. Other buildings in the scene remain standing today.

Click to enlarge – view north up Vine. Buster runs from Station No. 6, the left corner building, past the CALIFORNIA LAUNDRY, towards the HOTEL Eleanor at back. University of Southern California Libraries and California Historical Society, digitally reproduced by the USC Digital Library.

The sequence begins with Buster, having distanced himself from the main phalanx of the mob, jogging north past the DWP Distribution Station No. 6 at 1007 Vine, the white, left corner building in the main photo above, and in the Water and Power Associates photo pictured below. 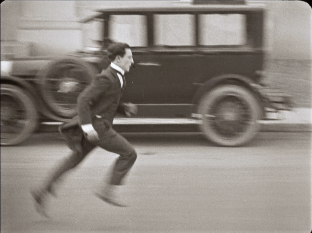 The north corner of Station No. 6 and matching driveways appear above.

Buster continues north up Vine beside the California Laundry (now a parking lot) to the SW corner of Eleanor. The women are also running north up Vine along the front of the laundry.

Click to enlarge – at left appears the great Seven Chances reveal. Looking west from Vine down Eleanor, Buster and some of the women spot each other. The green lawn and yellow fence match the corner of Buster’s studio at right, seen looking south down Lillian Way across Eleanor. 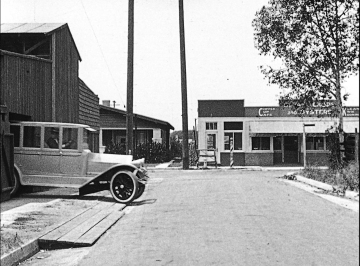 At left this scene from The Blacksmith (1922) looking west down Eleanor shows the back corner of the Keaton Studio barn, along with the bungalow, barber shop, and “Coffee Cup Cafe” across the street along Cahuenga that were later replaced by the Technicolor Building in 1930. They appear aligned directly above their positions in this matching scene from Seven Chances.

Another match, the fence behind Buster’s head is where he staged a scene fleeing from Steve Murphy in Sherlock Jr. (1924), both look west down Eleanor toward Lillian Way.

At left, looking east from the studio down Eleanor towards Vine as Buster stunt doubles for another actor by falling off a motorcycle in Sherlock Jr. The fence to the left and the sidewalk to the right are the same sidewalk and fence appearing in Seven Chances, upper right, looking west down the same block. The right side of the Sherlock frame also shows the north side of the California Laundry – the Vine St. side of the laundry appears to the lower right. 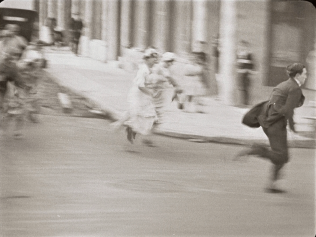 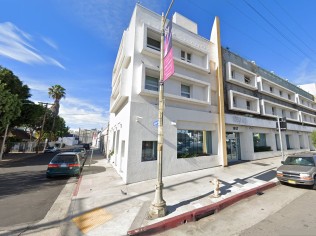 Last, Buster dashes further north past the NW corner of Eleanor and Vine, at the time the Hotel Eleanor – 1057 Vine. Still standing, the hotel building has been “improved” beyond recognition.

My new Seven Chances YouTube video shows all the details starting at 9:49. I prepared the video to introduce the film at a recent screening hosted by the Niles Essanay Silent Film Museum, with the wonderful musician, scientist, and film archivist/historian Jon Mirsalis providing live musical accompaniment. Jon accompanies the video too. I discovered the Keaton Studio cameo when preparing the video.

A dozen posts across this blog reveal other new discoveries from Seven Chances, including Buster’s girlfriend’s house above, and scenes where Buster filmed adjacent to his studio. Look for them all HERE and HERE.

Checkout the many video tours on my YouTube Channel, including this tour which shows the Keaton Studio and its environs.

To download a fully annotated PDF walking tour of the Keaton Studio (not yet updated with these Vine St. locales) click HERE.

Looking west down Eleanor from Vine, where the Buster noticed the mob and dashed to the right. Pan to the left to see the Distribution Station No. 6 down the street.

8 Responses to What? Buster Keaton’s Studio Appears in Seven Chances!