Click to enlarge. A delighted girl peeks through a screen door during The Kid.

[Update: I found where this scene with the girl was filmed – read HERE] While Chaplin fans packed theaters worldwide to watch his onscreen antics, during several scenes in The Kid you can see fans watching him onscreen as well.  Here are several surprise fan cameos, thanks to the remarkable image quality of the new Criterion Collection Blu-ray release of The Kid. My recent post HERE shows how Chaplin made The Kid, which I explain in full detail in my book Silent Traces. 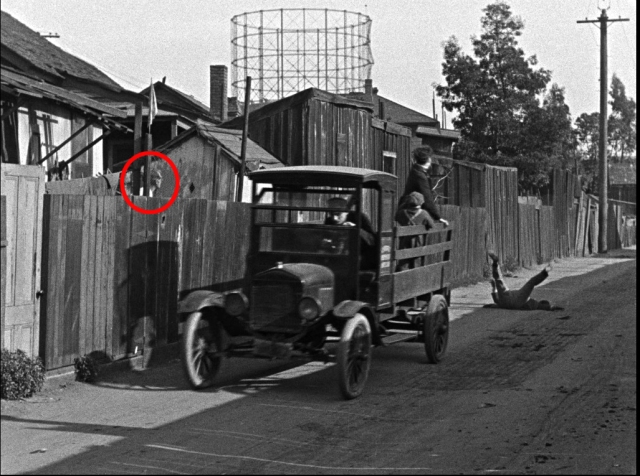 This neighbor suddenly peeks over the fence as the orphanage truck travels west down Labory Lane. 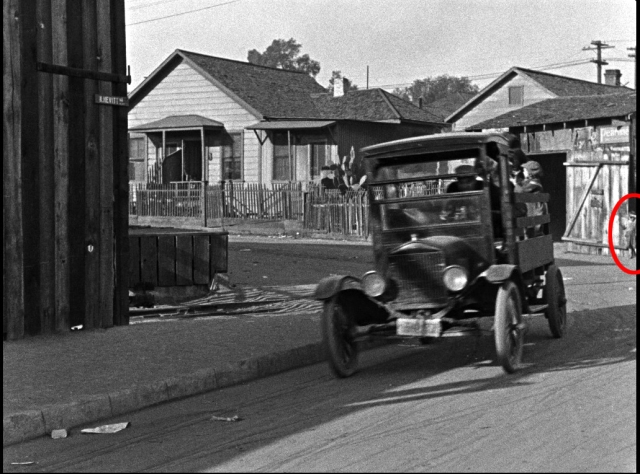 Shielding his eyes from the sun, this real-life waif watches Jackie Coogan in the orphanage truck as it turns from the east end of Labory Lane onto Hewitt.

Fans made cameos in other early Chaplin films.  Thanks to the Blu-ray quality of the Flicker Alley release of Chaplin’s Essanay comedies, here below you can see a bystander through the window (notice his hat) during the opening scene from The Bank (1915), and further below a seaside crowd from By The Sea (1915).

We’re watching Charlie, and so is the man in the hat, watching him through the window in The Bank.

A large crowd gathers to watch Charlie – anticipating what will happen with the banana in By The Sea. Filmed beside the Venice Diamond Cafe at the north corner of the former Venice Plunge (indoor pool).