Early Thrill Comedies – Who Was First?

Thrill comedies featuring a star hanging from the side of a tall building have long been a staple of silent films. The photo at left from Play Ball (1925) eloquently explains the brilliant technique with a single image. Starting with Look Out Below in 1919, Harold Lloyd would become the master of the genre, capped by his masterpiece Safety Last! (1923) that still enthralls audiences today. But when was this effect first used in a movie? I pondered this when film historian Jack Theakston inquired about Ignatz’s Icy Injury (1916), one 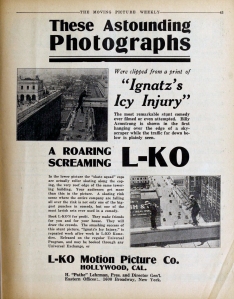 of the earliest thrill films of which he was aware. While it would be fun to declare Ignatz the earliest winner, it’s likely the effect had already been employed for years, perhaps as early as by George Melies.

Using Lantern Media to research Ignatz, the L-KO Kompany’s Billy Armstrong comedy promoted at right in Universal’s The Moving Picture Weekly trade magazine, I quickly happened upon two other contemporary L-KO stunt comedies promoted by Universal, Billie Ritchie’s A Bold, Bad, Breeze (1916), and Dan Russell’s Rough Stuff (1917). As we’ll see, these three films share much in common with each other and with other stunt comedies of the era. 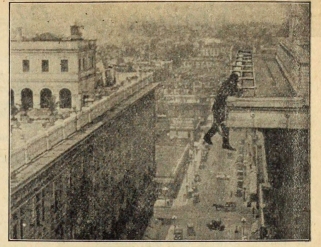 Above, the two stunt images from Ignatz touted in the July 8, 1916 Moving Picture Weekly trade advertisement; (left) looking west down 8th at the Hamburger’s Department Store, and south down Broadway (right). Both scenes were staged from atop the 1912 Chapman Building at the NE corner of 8th and Broadway.

Matching views west – the extant Chapman Building (756 Broadway) has a small two story structure on its large rooftop, where Billy Armstrong crawled around presumably with scaffolding or nets below out of camera range, but far from the 13 story drop to the street.

Click to enlarge – above, looking north up Broadway towards the two story structure atop the Chapman (Investment) Building where the filming took place. The “Examiner” Building (orange) and the four tall buildings immediately behind it all remain standing. USC Digital Library.

Ignatz was filmed atop 756 S. Broadway looking south towards the same block appearing north behind Harold Lloyd, where he filmed the clock scene from Safety Last! atop 908 S. Broadway. Notice the opposite views of the Majestic Theater (M), Tally’s Theater (T), and Hamburger’s (M). Marc Wanamaker – Bison Archives.

Click to enlarge – next for discussion is Billie Ritchie’s A Bold, Bad Breeze, pictured here in the July 1, 1916 issue of The Moving Picture Weekly. Billie was filmed atop the extant Southern California Gas Company building at 950 S. Broadway, the same rooftop where Harold Lloyd staged the middle sequence of his climb in Feet First (1930). The “JOSEPH’S” wall sign at the left is where the “RADIO SUPPLY CO.” wall sign is to the right. The L.L. Burns building at back is 908 S. Broadway, where Lloyd staged the clock sequence from Safety Last! Both the 908 and 950 buildings remain standing, but a giant modern apartment complex has been built between them. USC Digital Library.

After solving this location the hard (but fun) way, I then found this full view photo depicting the view up Broadway. The white building behind Billie is where Harold Lloyd later filmed the clock scene from Safety Last! 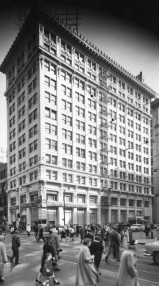 Last comes Rough Stuff appearing in the August 4, 1917 issue of The Moving Picture Weekly. How did they film it? Again, from atop the same two story structure on the roof of the Chapman Building, only this time looking north. The beautiful white Hass Building in the background, at the NE corner of Broadway and 7th, remains standing, but has been “improved” with a modern facade. LAPL.

This other view from Rough Stuff also reveals the Bullock’s Building to the left, still standing on the NW corner of Broadway and 7th. 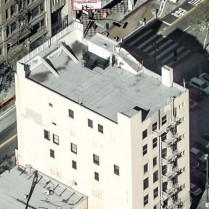 This absolutely convincing yet low-tech special effect no longer seems to be employed much today. One of the few (no longer modern) examples I’ve found was the 1985 pilot movie for the TV series Moonlighting with Cybill Shepherd and Bruce Willis. Looking south, the rooftop structure just to the right of Bruce is the same stairway entrance structure the cops are standing on, and pictured here to the right, both looking north.

A modern view from the two story structure atop the Chapman Building towards the Hamburger Building. (C) 2019 Microsoft.

7 Responses to Early Thrill Comedies – Who Was First?