Making A Living beside the 3rd LA Times Building

As I explain in my visual essay included in the Criterion Collection Blu-ray edition of Charlie Chaplin’s Modern Times (1936), Chaplin filmed scenes for his first movie Making A Living (1914) beside the third Los Angeles Times Building that once stood on the corner of 1st and Broadway.   Thanks to the clear resolution of the Criterion release, we now know Chaplin’s final silent film Modern Times (well, final film without spoken dialog) is connected to the fourth Los Angeles Times Building that opened in 1935.

During Modern Times factory worker Charlie tightens bolts on an ever-accelerating assembly line, eventually suffering a nervous breakdown.  After attempting to tighten the suggestive buttons on a matron’s dress (below left), he is carted off to a sanatorium (further below left).  These scenes were filmed on Jackson Street beside the Southern California Gas Company gas manufacturing plant, explained in further detail in my prior post about the noir connections to Modern Times, and in full detail in my book.

Click to enlarge. Matching views of the Jackson Street side of the Ducommun gas manufacturing plant, from Modern Times, left, and Harold Lloyd's 1926 feature For Heaven's Sake, at the right. The yellow box marks the same doorway in each image.

As Chaplin’s ambulance heads west down Jackson Street below left, the high resolution Blu-ray image reveals the profile of the recently opened fourth Los Angeles Times Building in the far distance.  The 1948 aerial image at the top of this post shows how the filming site lines up directly with the Times Building. 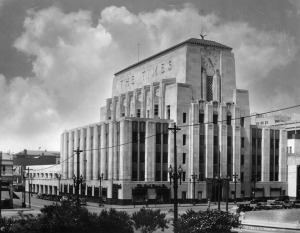 The cornerstone for the fourth Los Angeles Times Building, at 1st and Spring, was laid on April 10, 1934.  When the Time Building opened July 1, 1935, it was the largest newspaper building in the western United States.  The building was designed by Gordon B. Kaufmann, who also designed Hoover Dam, and the Athenaeum at the California Institute of Technology in Pasadena.  Kaufmann’s Modern design for the Times Building won a gold medal at the 1937 Paris Exposition.  The fourth Times Building has since been greatly expanded, and is still in use today.  The building is open for tours twice a month.

The fourth Times Building on Spring replaced the former third Times Building at 1st and Broadway, completed in 1912, and well-known at the time for its landmark crenelated clock tower and golden dome (see below right).  The third Times Building stood on the same site as the second Times Building, built in 1887, that was demolished by a bomb blast in 1910 during a bitter labor dispute between the paper and union organizers.  The first Times Building was constructed at Temple and New High Streets in 1881.

My visual essay regarding Chaplin’s Keystone films, featured as part of the Flicker Alley Chaplin at Keystone DVD set, also discusses his debut beside the former third Los Angeles Times Building.  You can see the essay here.