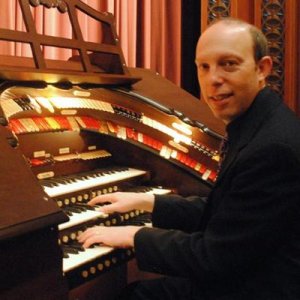 With now this third post, let me repeat, musician Ben Model is a silent film SUPER-HERO. Aside from his duties as resident accompanist for MoMA in New York, the Library of Congress, and performing at silent screenings around the country, his indie Undercrank Productions has released well over 20 rare silent movie DVDs. I only became aware of the delightful Alice Howell comedies (Alice Howell Collection) and the equally delightful Doug MacLean light comedies (The Douglas MacLean Collection) because Ben had first tirelessly assembled, restored, scored, and released these essential early films to home video. More remarkably, Ben and film author-historian Steve Massa host a weekly live-streamed silent film comedy show The Silent Comedy Watch Party Sunday afternoons at 3pm EDT on YouTube. (This post HERE 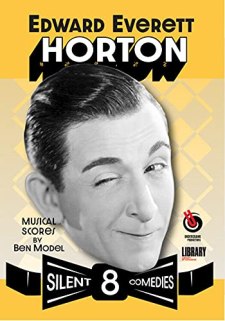 addresses a few early Hollywood scenes from Alice Howell’s films, while this post HERE highlights many overlaps between Doug MacLean and Harold Lloyd). 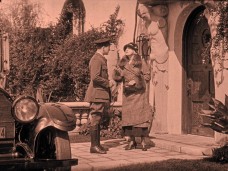 In the late 1920s audiences enjoyed Edward playing a series of fussy silent characters, unaware his voice would be perfectly suited to play similar roles in the talkie 1930s. Here, in No Publicity (1927), hoping to capture an exclusive news photo, photographer Edward crashes a socialite party, and ends up compelled to give the ladies an impromptu speech (while dressed in drag – it’s complicated). The society matron’s home (left), still standing, is located at 53 Fremont Place, one of the many magnificent homes built at this small gated community located south of Wilshire Boulevard, and also appears in The Red Kimono (1925) upper right (read all about The Red Kimono HERE). 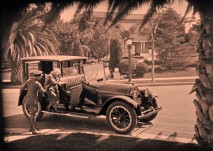 At left, Edward hopes to crash the party by taking the ice-man’s place. These views from the matron’s home show 56 Fremont Place across the street (notice the “56” on the curb), the still-standing mansion where Mary Pickford once lived for a year in 1918, and that also appears in The Red Kimono (upper right) and as Jean Harlow’s home in Bombshell (1933) (lower right). 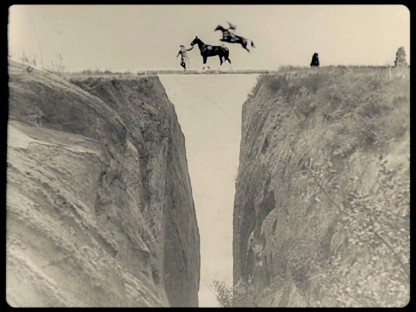 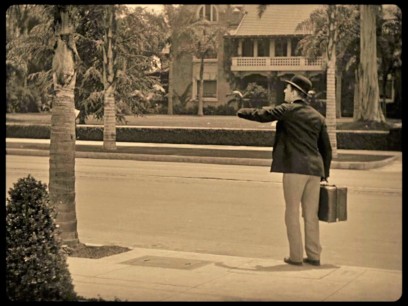 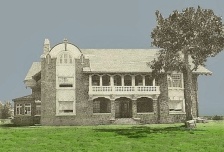 During Scrambled Weddings (1928) Edward flags down a taxi, with the grand home 3424 W. Adams Blvd. still standing in the background, although now partially blocked from view by a church. Photo Duncan Maginnis Historic Los Angeles. 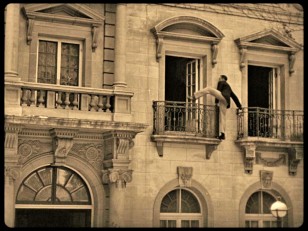 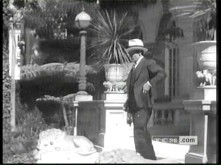 Later during Scrambled Weddings, Edward and his true love flee the front of the Brunswig Mansion, along the same steps appearing with Jimmy Cagney (upper right) in Blonde Crazy (1931). As reported HERE, the same mansion also appeared briefly in the Marx Bros. 1931 movie Monkey Business.

During Vacation Waves (1928), Edward’s dream of a relaxing vacation with his wife is dashed when his towering mother-in-law and pesky young brother-in-law tag along. Here they flag a bus looking south down Rampart Ave. from the corner of W 4th Street.

During Vacation Waves, a frustrated bus attendant orders Edward to take the upper deck. 417 N. Rampart appears behind him. 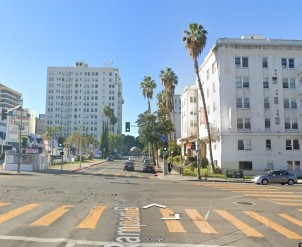 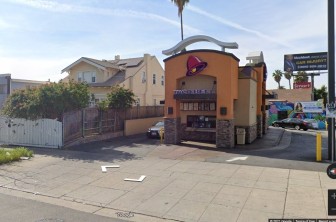 Edward’s bus travels all the way north up Rampart and turns right onto Beverly Blvd. 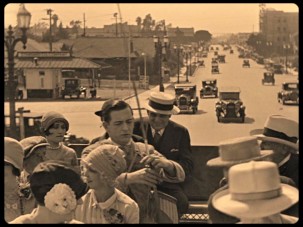 Completing the turn provides a rare view west down Beverly. That apartment at back is still standing. 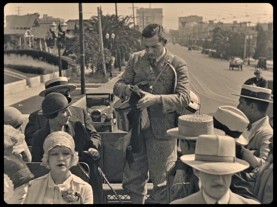 The family begin their fishing vacation at Newport Beach. While Harold Lloyd does not appear to have ever filmed here, Buster Keaton filmed five silent movies here (some later talkies too), including this start of the boat racing scene from College (1927). Notice the matching homes on Balboa Island at back.  The water tower in College places this directly across from the Newport Beach Pavilion. 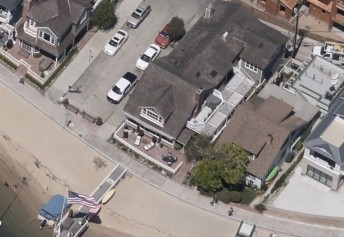 While most homes have been heavily remodeled, the white house above Edward’s head and the home to left, 258 and 256 S Bay Front, both remain relatively unchanged. 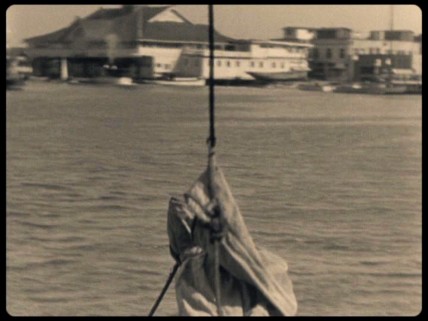 A parting shot from Vacation Waves (left). Built in 1905, the Newport Beach Pavilion (as seen in Buster Keaton’s The Cameraman (1928) upper right) has been a landmark for more than a hundred years. At the time tourists could travel to the pavilion from downtown Los Angeles in about an hour by taking the Pacific Electric Red Car.

Two other films from the set, Call Again (1928) and Dad’s Choice (1928) feature many street level views along Hollywood Blvd, especially near Highland, and both at, and along, Sycamore. Extensive scenes from Dad’s Choice were also filmed at what is now the William Andrews Clark Memorial Library. Click to enlarge, and you can read the its 2205 W. Adams address sign in this frame.

In closing, we should all be so grateful to Ben, and for all the silent movie entertainment and history he has reclaimed for us. We also owe an immense debt of gratitude to Richard Simonton Jr. for rescuing these prints from Harold Lloyd’s film vault, and placing them in the Library of Congress. The Edward Everett Horton: 8 Silent Comedies DVD set is simply fantastic, so much fun, so clever, so beautifully filmed. Unavailable for nearly a century, thanks to Ben and Richard, we can now enjoy these eight “new” entertaining comedies we might not otherwise have ever been able to see.

Below, the corner of 4th and Rampart where Edward’s family boards the bus in Vacation Waves.