Straight from their opening-scene wedding in One Week (1920), staged on the steps of the Congregational Sunday School at the SE corner of Lillian Way and Romaine (kitty-corner from the Keaton Studio), Buster and Sybil Seely drive west along Los Feliz Blvd., a landmark Hollywood thoroughfare. Running east-west along the original southern border of Griffith Park, the open fields north of the dirt road were once populated with flower nurseries and hothouses, some visible during Sybil and Buster’s scene above.

Click to enlarge – circa 1910 – looking east down rambling Los Feliz at the left. Franklin runs diagonally from lower right towards the center. Western Ave. runs from Immaculate Heart High School in the right foreground towards the right photo edge. This shows only half of the full panoramic photo. Huntington Digital Library.

Los Feliz terminates along its west end by turning south and merging into Western Avenue, a major north-south street and former trolley line. This west end appears in many opening scenes during One Week, and again in Buster’s Convict 13 (1920). I know little of the area’s rich history, but will focus on this circa 1910 panoramic view looking east down Los Feliz and south down Western in a single view.

To get our bearings, looking east, the red line marks Hobart Blvd. running south from Los Feliz (left) to Franklin (right). The low center hill is where Cecil B. DeMille would later build a grand estate. Note the prominent bunch of trees (yellow).

This closer view pairs with Buster astride two cars in One Week. 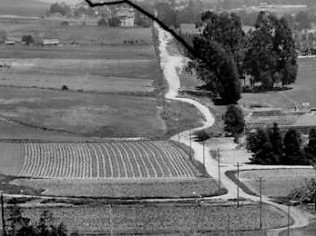 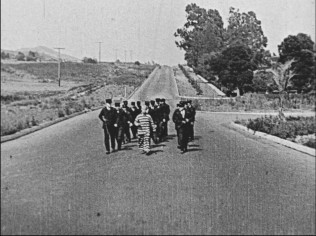 Next, matched with Convict 13, as they march from the near corner of Serrano Ave. 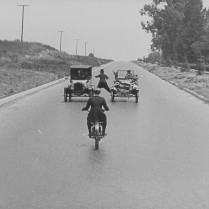 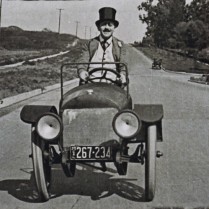 Notice the matching “Э” profile in the trees, along with a matching view from an unknown film clip studied by the Library of Congress “Mostly Lost” silent movie identification festival.

Again, here above is Hobart Ave. running south from Los Feliz at left to Franklin at right. 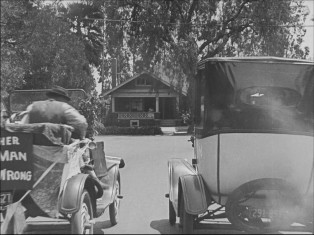 These views from One Week (left) and Convict 13 (right) look south down Hobart towards Franklin.

Matching views on Hobart from Convict 13 , looking south toward Franklin at left, and north from Franklin at right (notice the ridge line). 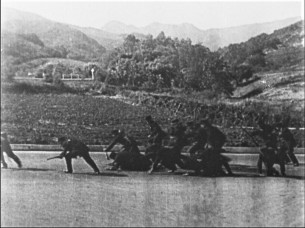 Matching views looking north from Los Feliz towards Griffith Park, with Convict 13 at left, and the Mostly Lost mystery film at right. Notice the distinctive ridge line over the comic’s top hat, matching the center of the left Convict 13 frame, and the Convict 13 frame further above. 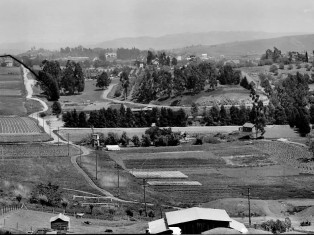 The distinctive barn in the foreground appears during One Week as Buster attempts to hail a ride, looking west at where Los Feliz turns south to merge into Western. Note the prominent cement stairway. 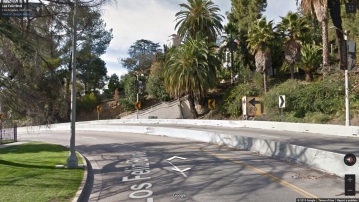 The barn is long gone – it stood on what is now the campus for the American Film Institute, but the stairway remains. 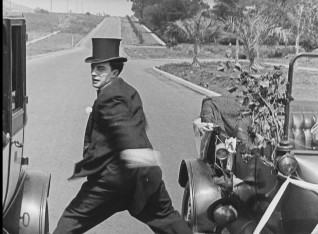 Again matching views from One Week (left) and Convict 13 (right) looking east on Los Feliz, showing the near corner of Serrano Ave. 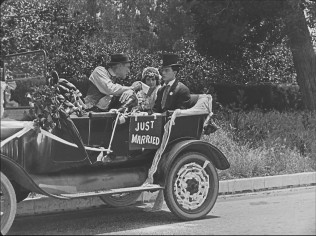 Given the logistics and similar landscaping, these early scenes from One Week were likely filmed on Los Feliz as well.

A popular filming site, Los Feliz appears, for example, in the Larry Semon – Stan Laurel comedy Frauds and Frenzies (1918) above left, and in Al St. John’s Out of Place (1922) above right, showing Immaculate Heart and the stairway at back. Snub Pollard rode a runaway grand piano here too during Sold at Auction (1923). 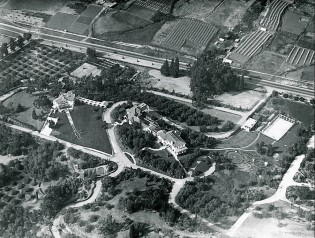 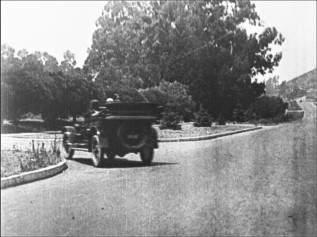 This 1921 aerial view of the Cecil B. DeMille estate, looking north, shows that prominent bunch of trees just south of Los Feliz, appearing again in Convict 13 (right), this time much further east, looking west toward that barn and stairway far at back. Hobart Blvd. appears at the left edge of the aerial view. HollywoodPhotographs.com.

This 1920 Baist Atlas (page 41) provides an overview. While subdivided, nearly all the land between Los Feliz and Franklin are empty lots awaiting future homes. DeMille would build his house on that TR 5078. Looking north, this 1922 aerial shows the corner where Los Feliz turns into Western, with Immaculate Heart High School at the left. HollywoodPhotographs.com.

In closing, these now 20 year old (!) photos provide a sense of Los Feliz today. You can explore further on Google Maps below.

Please help support naming the Chaplin Keaton Lloyd alley in Hollywood by posting a review on Google Maps. Prototype alley sign design by noted Dutch graphic artist – Piet Schreuders. Download a 4-page brochure about the alley HERE. This video further explains the alley – if you can, please leave a thumbs up and share it with others.