Chaplin falls for The Kid – every scene now identified

Charlie Chaplin’s masterpiece The Kid (1921) tells the story of the Little Tramp discovering, trying to avoid, and eventually falling in love with an abandoned infant, played out scene by scene at the end of this post. As I write in a prior post, you can see bystanders watching the filming, such as a delighted girl peeking through a screen door as Charlie strolls by a matron with a baby carriage. But where was this filmed?

Likewise, Charlie gives the baby to an old man at the Chaplin-Keaton-Lloyd alley in Hollywood (left), but then the old man exits an alley beside a 713 address, nowhere near Hollywood. Where was this filmed? As shown below, every scene in the entire sequence leading to Charlie falling for the kid is now identified. While many of these locations appear in my book Silent Traces, and in other posts including How Charlie Chaplin Filmed The Kid, these two key scenes eluded detection for years.

Click to enlarge – 1935 view looking west at the existing Hall of Justice, the Plaza de los Angeles, and Olvera Street. The red oval (left) marks the old man with the baby, the yellow oval marks where the thieves stood, and the orange oval (right) marks the matron with the stroller. Chaplin filmed many scenes in Chinatown, and both north and south of the Plaza. Chinatown would be demolished to build the Union Train Station. Much of the area to the left is now lost to the 101 freeway. USC Digital Library

To begin, let’s focus on when the thieves discover there’s an abandoned baby inside their stolen car. This was filmed at the back of the former Rescue Mission, beside a rail spur branching off from the main rail line along Alameda, next to a crumbling brick wall. Although the above photo was taken over a dozen years later, the yellow oval marks where they stood. Below, the yellow “X” marks where they stood. 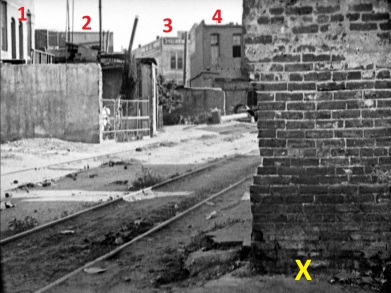 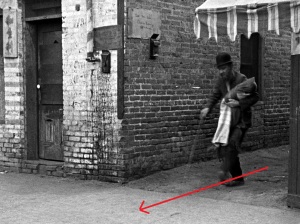 Above, the yellow “X” and yellow oval show where the thieves stood when they realize there’s a baby inside the car. The aerial view directly above looks east, taken at the time Chaplin filmed, with building #2 on the corner of Alameda, running left-right, and Aliso, running up-down along the right. This entire view is now lost to the freeway. The red arrow above and to the right marks the old man’s path along an alley beside 713 N. Alameda. If you click to enlarge the movie frame, you’ll see “713” beside the doorway, and

a sign on the alley wall that seems to say “Lew Wai Sun Chair Repairing 715 Alameda” – matching the 1921 city directory entry for chair repairer Lew Wai Sun at 715 N Alameda. The vintage Baist and Sanborn fire insurance maps confirm the alley setting at the time of filming, all just steps from where the car thieves discover the baby.

The above photo (click to enlarge) shows the same 713 doorway appearing beside the old man, only the original alley and one story wood structure to the right are replaced by a brick two story building. The crumbling building where the thieves stood (yellow oval above) has been rebuilt. 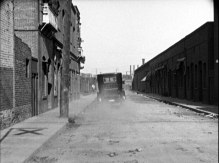 Next, I had long suspected the scene where the matron beats Charlie with her umbrella (above center) was filmed in Chinatown. After all, Chaplin filmed many other scenes there, and the shot of the thieves speeding into Chinatown from Alameda down Napier, above left, revealed some good candidate buildings on the right side of the street. But pesky facts got in the way. First, a reverse view photo of Napier (at right) showed these buildings had arched windows and doorways, unlike the rectangular windows and doors appearing in Chaplin’s scene. Further, the 645 address above the center doorway precluded any street within Chinatown. So I was stuck.

A big break came when author Carrie Pomeroy contacted me with some questions about The Kid, and to share some information she had garnered after spending a week in Bologna, Italy (!) poring over the Chaplin Studio production records for The Kid.

Charlie with the “Legit Bum” Dan Dillon at THE Hollywood alley

For starters, among Carrie’s many fascinating accounts, she reports: “For December 1, 1919, the records say they filmed at Hall’s Grocery with Minnie Stearns (the umbrella-wielding mother), her baby daughter Virginia Stearns, Walter Lynch as a cop, and Dan Dillon, described as “Legit Bum” on the daily production sheet.” I searched the city directories, and discovered there was a Hall’s Grocery once located at 6382 Hollywood Boulevard. The back of Hall’s Grocery stood along, wait for it, the Chaplin-Keaton-Lloyd alley! While I was already absolutely certain about the alley, it was fun to have this confirmed in the records, and I now knew the names of all of the actors, and when Chaplin filmed there. When filming there again the next day the studio records refer to it as “Hall’s Alley.”

Dan Dillon, who plays the “legit bum” (Charlie’s not legit?) was busy the next day December 2, 1919, filming at three places – “Hall’s Alley, Chinatown and Mexican Quarters.” We now know “Hall’s Alley” means the Chaplin-Keaton-Lloyd alley in Hollywood, and that “Chinatown” refers to the alley at 713 Alameda. But where were these Mexican Quarters?

To begin, this frame of the girl peeking at Charlie has a Spanish sidewalk sign reading “Reparacion de Calazado” or “Shoe Repair,” while a 645 address appears over a doorway. With Chinatown mostly east and south of the Plaza, I realized that “645” and “Mexican Quarters” might indicate the streets a few blocks north of the Plaza. So Carrie’s report put me on the right track.

As it often happens, the best clues for solving a location are found in other films. Harold Lloyd, Snub Pollard, and other Hal Roach stars filmed frequently along New High Street north of the Plaza. Somehow, when glancing at Lloyd’s appearance in From Hand to Mouth (1919), I noticed the low brick buildings with rectangular doors and windows, and made the connection. After a quick flurry checking maps and other features, it was clear Charlie had filmed on New High Street beside the same buildings where Lloyd had filmed.

During another scene in From Hand to Mouth, the gap between the buildings, spanned by a wooden gate support, appears in both views above. The corner of Ord Street appears behind Harold.

Harold returned in 1926 to film scenes from For Heaven’s Sake. Here, Harold runs south down New High towards the corner of Ord Street. 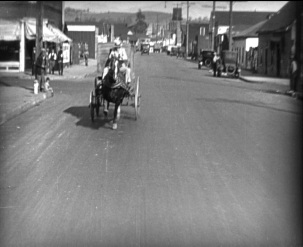 Again from For Heaven’s Sake, looking north, Harold races a wagon south down New High from the corner of Ord Street.

Last, a final view south on New High from For Heaven’s Sake, with the same “645” building (red box) in each shot. The building marked “Y” is a bakery built in 1923, replacing the building “Z” that stood during Charlie’s December 2, 1919 filming.

Lafayette Park is on Wilshire Boulevard next to the Town House Apartments at Wilshire on the corner of Commonwealth Avenue, where Charlie buys up all the Blind Flower Girl’s flowers in City Lights. The park is close to where Chaplin filmed several other movies, so it was familiar territory to him. So with Carrie’s help this final shot of the sequence was also identified.

Here below is every shot in the sequence where Charlie first encounters and falls in love with the kid, followed by a brief identification of each shot. 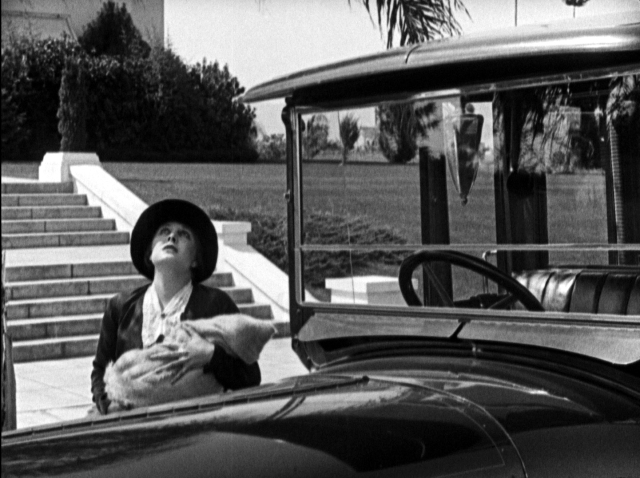 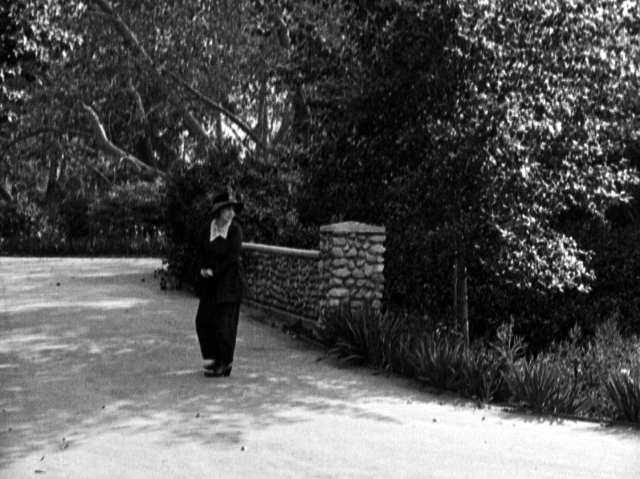 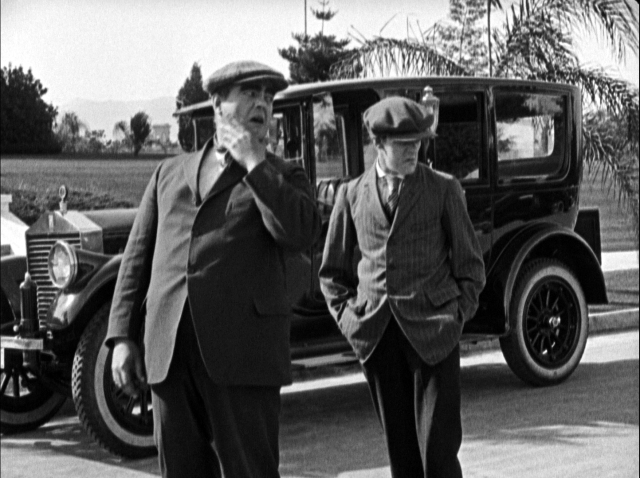 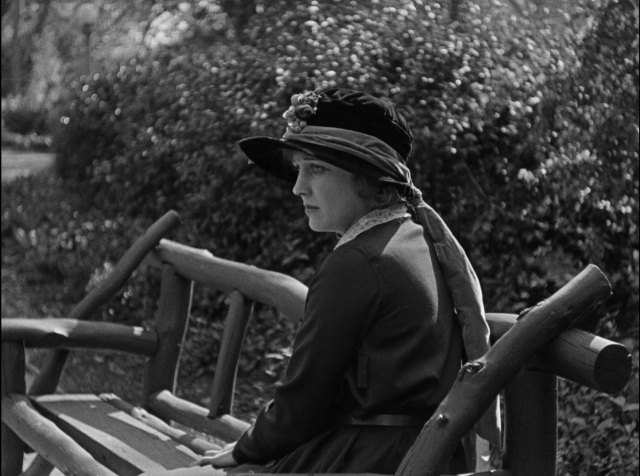 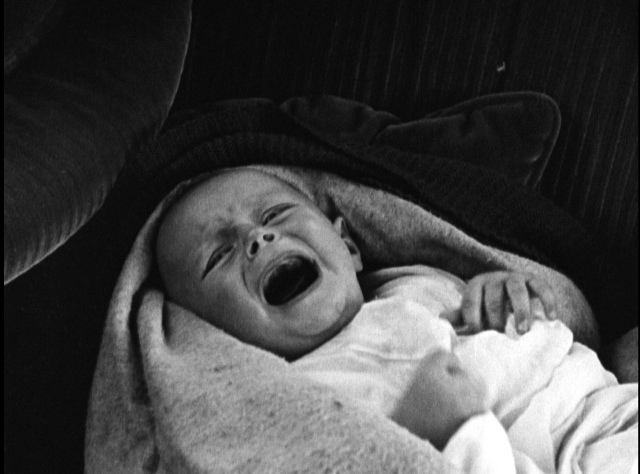 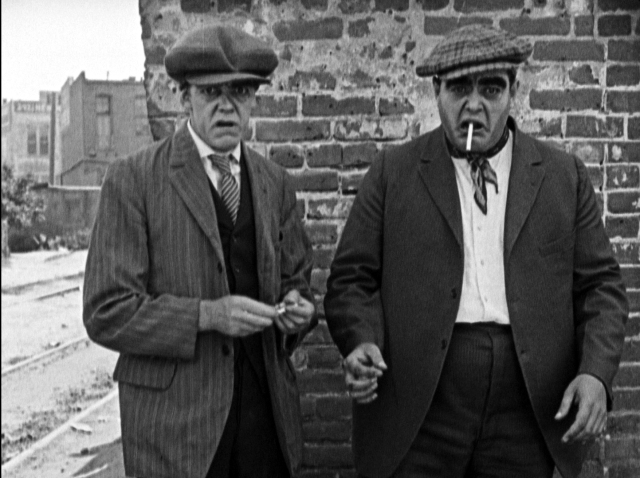 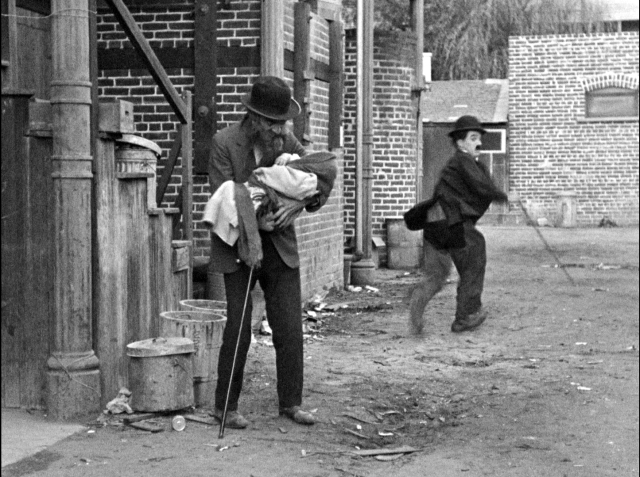 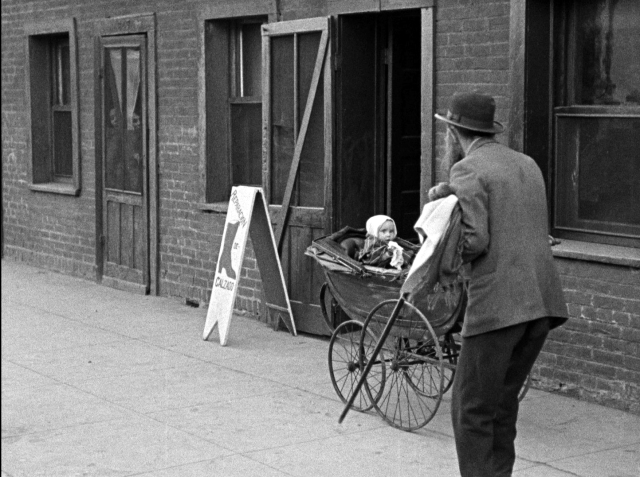 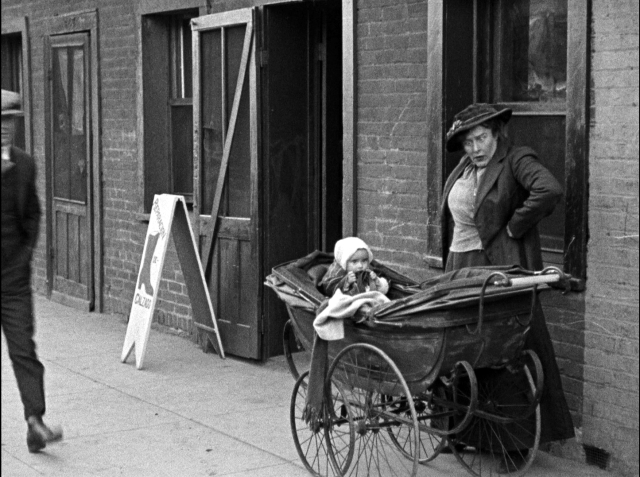 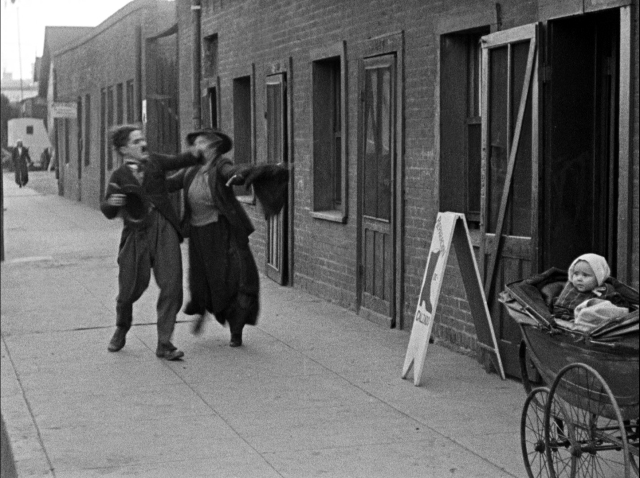 Edna abandons the baby in a limousine parked at 55 Fremont Place, later the home of Muhammad Ali, then enters Sunset Park. Thieves steal the car, and drive east down W. 8th Street, which shows the back of 55 Fremont Place. The thieves (identified by Carrie from the studio records as Albert Austin and A. Thalasso) discover the infant after parking the car behind the skid row Rescue Mission, where train tracks branch off from Alameda south of the Plaza de los Angeles downtown. Thalasso hides the baby at the north end of the Chaplin-Keaton-Lloyd alley in Hollywood, then the thieves drive down Napier Street from Alameda into the heart of the former Chinatown. Back at the Chaplin-Keaton-Lloyd alley in Hollywood (i) Charlies discovers the infant, (ii) tries to return him to Minnie Stearns, and (iii) hands the baby to Dan Dillon, the legit bum. NEW – returning south of the Plaza downtown, Dillon, the legit bum carries the baby at 713 Alameda. NEW – Dillon, the legit bum strolls near 645 New High Street north of downtown, and places the baby in Minnie’s baby carriage. Charlie dodges a cop (identified by Carrie as Walter Lynch) back in Hollywood at the Chaplin-Keaton-Lloyd alley. New – back on New High Street, Charlie strolls past Minnie, who bashes him with her umbrella, and calls in Walter the cop. The sequence ends with Charlie sitting on a curb on a backlot set at his Hollywood studio at 1416 N. La Brea, where he falls for the kid, and decides to raise him as his own son.

Carrie’s biggest surprise was discovering The Kid was not shot chronologically as she had expected. The scenes with Edna at the hospital and the thieves stealing the car and dumping the baby were the first scenes filmed in August 1919, followed by scenes with Chaplin and the baby in the attic and Jackie Coogan and Chaplin in the attic later that month. Scenes developing Edna’s story (the church wedding, the Pasadena Bridge sequence) weren’t shot until much later, in November, and to her surprise, the scenes here with Chaplin finding and trying to get rid of the baby were actually filmed in December 1919. The reception scene at which Edna and Carl Miller’s characters meet and the scene with Carl Miller in his artist’s garret weren’t filmed until February 1920. Carrie reports Edna and Carl’s outdoor balcony party scenes were filmed at the residence of Annie Stimson at 845 W. Adams Blvd., a home still standing.

Click to enlarge. A final view north, showing the matron’s baby carriage (orange oval) on New High Street to the left, the circular Plaza right of the center, where the thieves discover the baby (yellow oval), and the alley beside 713 N. Alameda (red arrow, oval) far right.

All images from Chaplin films made from 1918 onwards, copyright © Roy Export Company Establishment. CHARLES CHAPLIN, CHAPLIN, and the LITTLE TRAMP, photographs from and the names of Mr. Chaplin’s films are trademarks and/or service marks of Bubbles Incorporated SA and/or Roy Export Company Establishment. Used with permission. Check out the wonderful Blu-ray edition of The Kid – Criterion Collection.

Below, the site at 645 New High Street, now a parking lot.