Surviving his heroic climb up a skyscraper during Safety Last!, Harold Lloyd falls into the arms of his loving fiancé Mildred Davis, waiting for him on the rooftop. As reported in another post, this satisfying conclusion was actually filmed from atop three different buildings all still standing in downtown, 548 S. Spring Street, the Washington Building at 3rd and Spring, and 908 S. Broadway. But as shown here, a fourth building was briefly involved in the final scene. (In all Lloyd employed 17 downtown buildings during his “thrill” comedies – see PDF list of descriptions here).

Harold’s roommate was supposed to make the climb (portrayed by real-life stunt climber Bill Strother), but Harold starts in his place when vengeful cop Noah Young chases Bill inside the building. At each floor of Harold’s climb Bill promises to switch places as soon as he can ditch the cop, a running gag.

Once safe at last on the roof, the movie closes with Harold losing his shoes and socks to a sticky puddle of tar (at left), the final joke of the movie, preceded by “drunken” character actor Earl Mohan helplessly entangled in a

volleyball net (below). But the joke preceding Earl, the second to last joke of the entire film, tops off the running gag by showing Noah still chasing after Bill on a faraway roof down below, with Bill still pleading to Harold in tiny intertitle print “I’ll be right back – Soon as I ditch the cop.”

Noah Young chases Bill Strother along the roof of the former Mott Building.

This nearly last Safety Last joke was filmed looking down from the ten story Higgins Building, still standing at 2nd and Main, as Bill and Noah scramble north across rooftops from 141 S. Main to the Mott Building at 135 S. Main. Having studied the other Safety Last downtown locations, I knew this closing gag with Noah and Bill was not filmed near these other spots, and seemingly unsolvable, gave it no further thought.

Revisiting the scene years later, I realized from the light and angles that it was likely filmed looking north from the top of a fairly tall building. I also noticed trolley tracks in the street, and that one building had a finial (F) and a central, triangular parapet (P), while its neighbor had projecting twin bay windows, each sheltered by a curved roof (B) (see above). So I scrutinized vintage aerial photos for tall buildings south of two story parapets and bay windows, and before long found the corner of 2nd and Main. Once identified, numerous ground level photos and vintage maps confirmed the location. This street level view above looks north up Main from 2nd towards City Hall. USC Digital Library.

Above (click to enlarge), this 1927 view is one of several vintage aerial views that helped to identify this closing scene. The arrow marks the camera’s point of view.

Click to enlarge – another view from the Higgins Building looking down on where Noah chased Bill, with City Hall at back. Marc Wanamaker – Bison Archives. 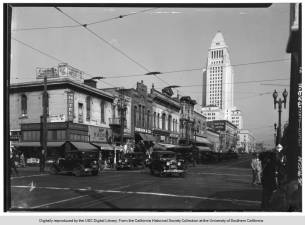 Above, matching views up Main from Second, with City Hall at back. USC Digital Library and Palmer Conner collection Huntington Digital Library. At left, yet another view – LAPL.

Below, a matching modern view north up Main Street from the Higgins Building on the left corner.