Front and Back Cameos – 100 years of a Hollywood landmark

In Why Worry? above, Harold Lloyd’s friend the giant celebrates news of Harold becoming a father.

Toberman Hall has stood at 6410-6414 Hollywood Boulevard (each oval above) since 1907.  Its original two-story neighbor to the left, at the southwest corner of Cahuenga and Hollywood Boulevard (pictured in the black & white images above) was expanded into a four-story building in 1931 (see color image above).  As shown, Toberman Hall witnessed the antics of Marie Dressler and a young Charlie Chaplin in the first Hollywood-produced feature length comedy Tillie’s Punctured Romance (1914), and a decade later appeared in Harold Lloyd’s 1923 feature Why Worry?

As shown, the back of Toberman Hall (red oval below) appears in Buster Keaton’s 1921 short comedy The Goat, where Buster filmed a scene in the alley alongside the former fire/police station facing Cahuenga. 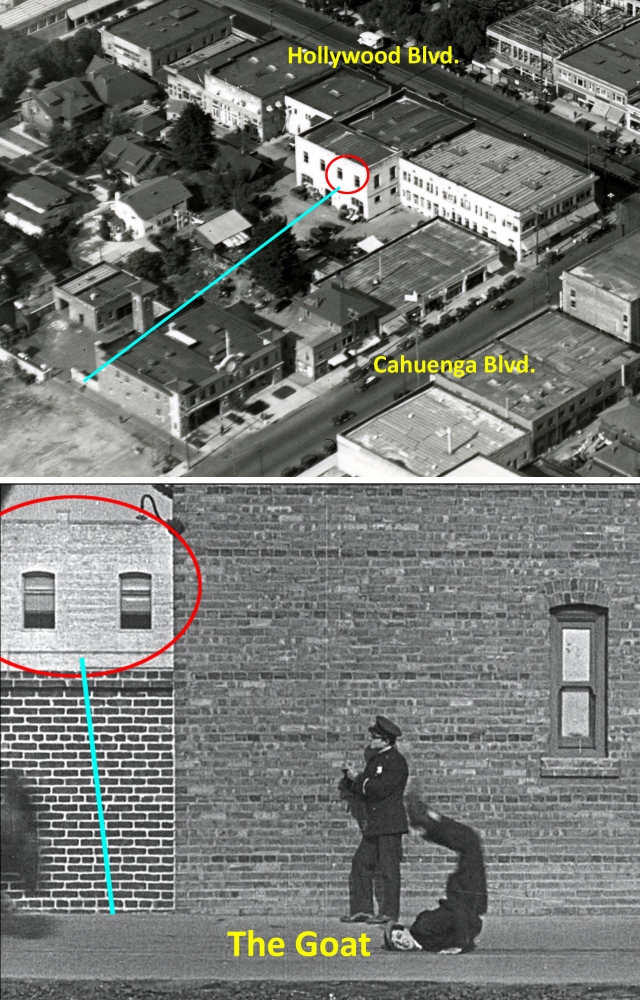 During the above scene from The Goat, Buster lands face down in an alley after being dragged into view by a speeding car, barely visible at the left.  Behind him is a low brick wall and the south side of the joint Hollywood Fire and Police Station that stood at 1625 and 1629 Cahuenga Boulevard.  The red ovals above identify matching windows of the back of Toberman Hall, and the point of view (blue line) from the fire station alley.  The aerial view above shows that this alley originally had no building along the other side.

This modern aerial view above shows the back of the extant Toberman Hall, aligned with the extant fire station alley, with the fire/police station replaced by a modern office building.

How do I know Keaton filmed this scene in the fire station alley, showing the back of Toberman Hall, especially since the station was destroyed by fire in December 1979?  Hollywood author and historian Tommy Dangcil (Hollywood 1900-1950 in Vintage Postcards, and Hollywood Studios) provided me with this post card that links the clues all together.

Buster at the fire/police station in Three Ages

The Hollywood Fire and Police Station (see full view above) stood at 1625-1629 Cahuenga Boulevard.  As I discuss in my books Silent Echoes and Silent Visions, the station appeared in Buster Keaton’s feature films Three Ages (1923) (see left) and The Cameraman (1928), as well as in Harold Lloyd’s Safety Last! (1923) and Hot Water (1924).  What’s more, we can see from the unique window configuration (1-5 above) that Keaton used the fire station alley for three different films, The Goat, Hard Luck (1921), and Neighbors (1920). 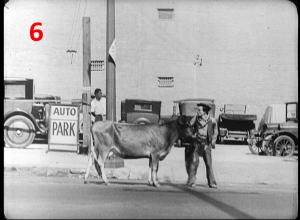 (6) Buster and Brown Eyes in Go West, across the street from the fire/police station.

During scenes from The Goat Buster runs past the corner of the fire station (above right) and hides under a car parked in the fire station alley.  When the car drives off, revealing Buster to the police, he grabs the bumper for a quick getaway (above center), only to land on his face moments later (above left).  These three shots reveal the five unique fire station windows (1-5) identified above.  The above scene from Hard Luck shows Keaton before hitching a ride on the back of a passing car, revealing the entire length of the fire station alley (this shot appears only on the Keaton Plus DVD version of the film), while the above scene from Neighbors shows a policeman harassing a man he mistakenly thinks is Buster.   Last, the views in The Goat and Hard Luck down the fire station alley reveal the small parking lot across the street (6) where Buster left his pet cow Brown Eyes during his 1925 feature Go West (inset). 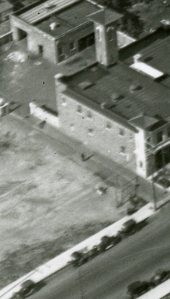 Plenty of room and sun to film.

Why did Keaton film at this alley so frequently?  As shown in this 1922 vintage aerial view (left), the fire station alley originally had no building along its south flank, exposing the length of the alley to the sun nearly all day long, and providing unobstructed room to place cameras and equipment.  Moreover, the alley was situated off of the same block of Cahuenga where Keaton filmed many other scenes, and was close to the Keaton Studio just a few blocks to the south.

To see many more amazing photos of this old fire station, visit the Photo Gallery at the Los Angeles Fire Department Historical Archive, and open the photos for Fire Station 27.  Then, mid-way down the page click the 1913-1930 link (the years this station was in service) to see many exterior and interior historic photos.

This final view shows the back of Toberman Hall (red oval) relative to the alley (yellow oval) where Keaton grabbed a passing car one-handed in Cops (1922) (see post HERE).

Click to enlarge. Another 1922 view of Toberman Hall (red oval) in relation to the Cops alley (yellow oval).

Tillie’s Punctured Romance Copyright 2010 by Lobster Films for the Chaplin at Keystone Project, from Flicker Alley.  All images from Chaplin films made from 1918 onwards, copyright © Roy Export Company Establishment. CHARLES CHAPLIN, CHAPLIN, and the LITTLE TRAMP, photographs from and the names of Mr. Chaplin’s films are trademarks and/or service marks of Bubbles Incorporated SA and/or Roy Export Company Establishment. Used with permission.

The Goat, Three Ages, and Go West are licensed by Douris UK, Ltd., and are all available on Blu-ray from Kino Lorber.

Below, the fire station alley to the left, and the back of Toberman Hall to the right.