How Charlie Chaplin Filmed The Adventurer

Decades before Bugs Bunny delighted audiences by tunneling into madcap predicaments, escaped convict Charlie Chaplin tunneled to freedom in The Adventurer (1917) on a Malibu beach within the shadow of Castle Rock and Haystack Rock, prominent coastal landmarks that stood near the dusty dirt road that would one day become the Pacific Coast Highway.  The Adventurer, and Chaplin’s other eleven short comedies prepared for the Mutual Film Corporation, have all been lovingly restored on Blu-ray, available from Flicker Alley.

Chaplin filmed early scenes near the mouth of Topanga Canyon, and the related swimming scenes in Venice.

When Chaplin filmed here in 1917, most of Malibu remained privately owned by May Rindge, widow of wealthy ranch owner Frederick Ringe. The public coastline road only traveled as far west as Topanga Canyon before it was forced to turn inland. Ms. Rindge battled in court for decades to protect her massive land holdings, bankrupting herself in the process, but in 1923 the US Supreme Court upheld California’s eminent domain powers, leading to the construction of the Roosevelt Highway (later Pacific Coast Highway) along her coastal land, that opened in 1929.  As explained in greater detail in my book Silent Traces, Chaplin filmed the initial beach scenes here, and the later scenes where he rescues Edna Purviance and others from the water in Venice to the south. 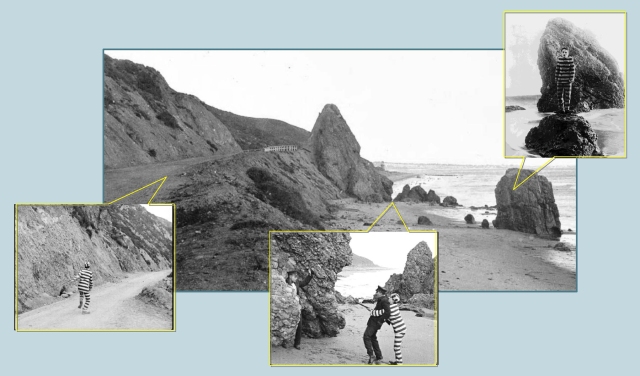 Then and Then – USC Digital Library

Another view of the filming area after the road was paved. This was likely taken before the Pacific Coast Highway opened in 1929. The coast road originally had to turn inland at Topanga Canyon because the Malibu shore was privately owned. USC Digital Library

The Adventurer – then and now. Jeffrey Castel De Oro 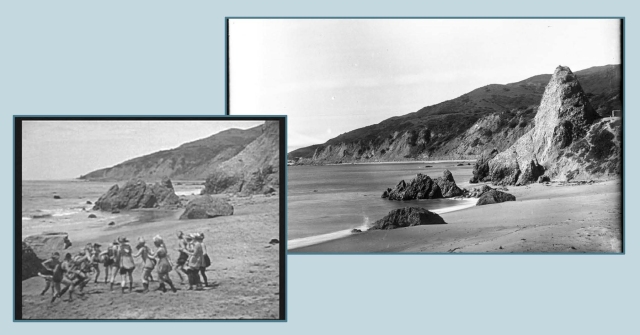 The Castle Rock beach was an extremely popular place to film. Now looking west, in the opposite direction toward Castle Rock, is a “Bathing Beauty” beach scene from the Mack Sennett comedy Hearts and Flowers (1919) available on the new CineMuseum Blu-ray release The Mack Sennett Collection available from Flicker Alley. USC Digital Library

The action jumps from Malibu to the Abbot Kinney Pier in Venice. The tower of the Venice Auditorium (USC Digital Library) appears behind Edna Purviance and Eric Campbell.  Marc Wanamaker – Bison Archives 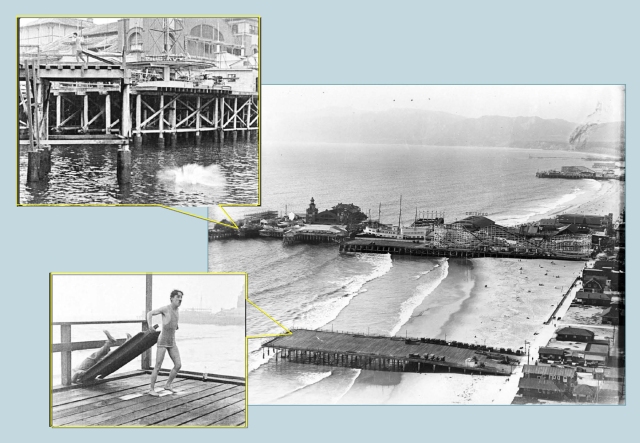 Click to enlarge. With clever editing, Charlie dumps Eric into the water from the Center Street Pier (lower left), yet Eric hits the water beside the Abbot Kinney Pier (upper left). 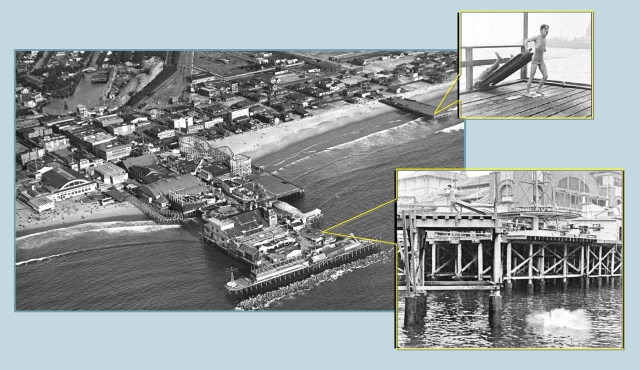 A reverse view of Eric’s bifurcated spill into the water. The Abbot Kinney Pier would burn almost completely a few days after this photo was taken in 1920. It was quickly rebuilt in 1921. Marc Wanamaker – Bison Archives

The front of the Venice Auditorium appears in both images, along with a “MUIRAUQA” sign, the back of the illuminated sign for the Venice AQUARIUM. LAPL

This view from Harold Lloyd’s 1920 short comedy Number Please? shows the same AQUARIUM sign as it appeared to the public strolling down the pier. The inset view looks the other way. LAPL

The Abbot Kinney Pier burned in late 1920, but was quickly rebuilt in 1921.  The re-built pier appears prominently during Chaplin’s 1928 feature comedy The Circus. Following years of decline, and subsequent fires, the pier was closed and demolished in 1946.  Chaplin also filmed Kid Auto Races at Venice Cal. (1914) (see blog post HERE) and By The Sea (1915) in Venice.  All three films are also discussed in my book Silent Traces.

The Adventurer (1917) from the new Blu-ray release Chaplin’s Mutual Comedies 1916-1917.  All images from Chaplin films made from 1918 onwards, copyright © Roy Export Company Establishment. CHARLES CHAPLIN, CHAPLIN, and the LITTLE TRAMP, photographs from and the names of Mr. Chaplin’s films are trademarks and/or service marks of Bubbles Incorporated SA and/or Roy Export Company Establishment. Used with permission. Hearts and Flowers (1919) from the new Blu-ray release The Mack Sennett Collection Vol. One.  Number Please? (1920) HAROLD LLOYD images and the names of Mr. Lloyd’s films are all trademarks and/or service marks of Harold Lloyd Entertainment Inc. Images and movie frame images reproduced courtesy of The Harold Lloyd Trust and Harold Lloyd Entertainment Inc.

7 Responses to How Charlie Chaplin Filmed The Adventurer