Cagney and Harlow on The Public Enemy’s Miracle Mile 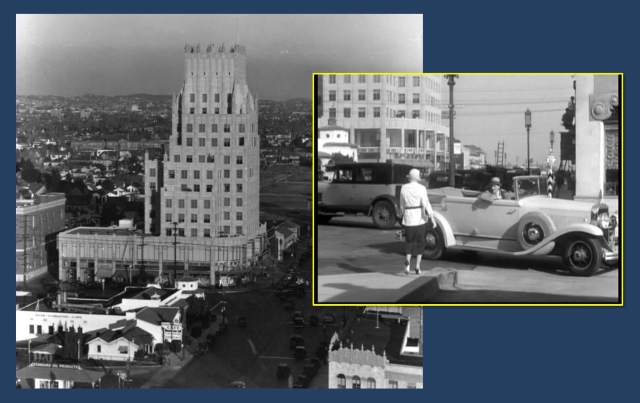 Click to enlarge each image.  James Cagney slows down to check out Jean Harlow.  The view looks east down Wilshire Boulevard from Detroit Street towards the E. Clem Wilson Building on the corner of La Brea.  LAPL

Thanks to the Turner Classic Movie Channel’s Pre-Code Festival this past month, I’ve been able to catch many great films for the first time, including the topic of this post, The Public Enemy (1931). Much has been written about this film, including the shocking scene where Cagney smashes a

grapefruit into Mae Clarke’s face.  I’ll leave the commentary to others, but as a fan of early Los Angeles, I was intrigued to discover a key scene, where Cagney picks up Jean Harlow on the street, was filmed along a couple of blocks of the Wilshire Boulevard shopping district known as the “Miracle Mile.”

Cagney and his buddy played by Edward Woods drive south down Detroit Street crossing Wilshire. The Wilshire Manor Apartments (oval) stand at back. 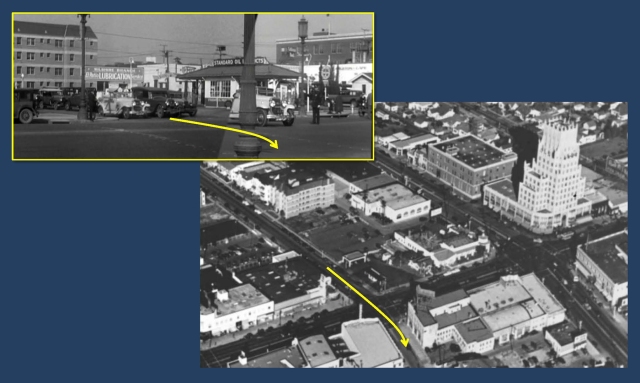 Cagney slows down to check out Jean Harlow. The view looks east down Wilshire from Detroit.  The right image shows detail of the E. Clem Wilson Building.  LAPL

This front view of Harlow, supposedly on the same corner of Detroit, was filmed one block further west, at the corner of Cloverdale Avenue, in front of the Dominguez Building. The real estate ad behind Jean also appears in this vintage view. USC Digital Library 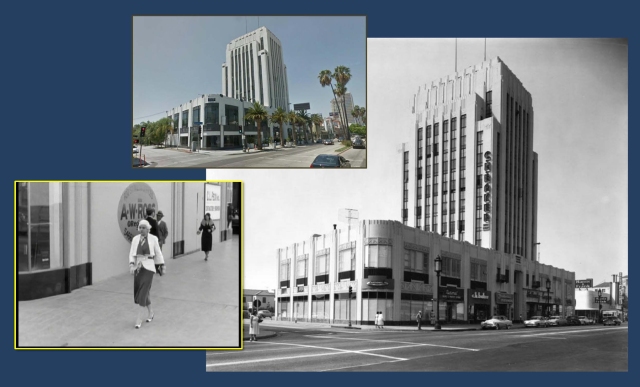 Why, if Cagney met Harlow on the corner of Detroit, was she was first filmed at the corner of Cloverdale? Because at the time the Detroit corner was an un-photogenic parking lot. The parking lot curb (oval) appears in the movie frame looking east, and in this 1932 view looking west, taken from the E. Clem Wilson Building. LAPL

Cagney stopped at the corner of Detroit (above). Harlow is introduced in closeup standing on Wilshire, near the same corner.  Behind her, looking to the NW, are buildings (callout box) on the north side of Wilshire. USC Digital Library

Cagney convinces Jean to allow him to give her a ride. These views show details on the building standing on the SE corner of Wilshire and Detroit. USC Digital Library

A modern view of the same corner. The window and door patterns of the brick building remain the same, so apparently it is the same building, stripped of all ornamentation.

Edward Woods plays chauffeur, driving Cagney and Harlow along side this beautiful building now lost to history. Notice the matching “NUTS” sign detail. The view looks toward the NE corner of Wilshire and Hauser, six blocks west of Detroit. A Pig ‘N Whistle restaurant stood on this corner during filming – the words barely appear on the awning as they drive by.  LAPL

Continuing driving west along Wilshire from Hauser, the car passes an existing store, home to a Safeway at the time of filming, and to a “Pay n Takit” store in the vintage photo. It is now an IHOP restaurant.  California State Library 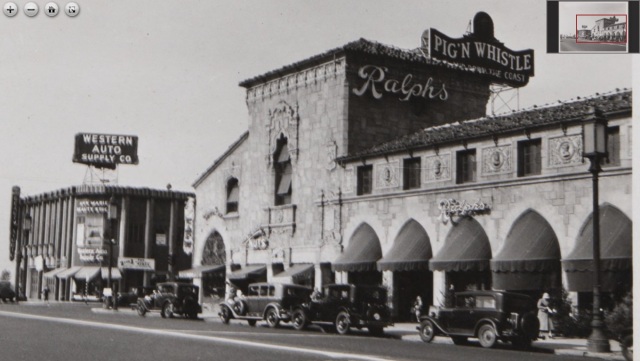 A closer view of the two stores. California Historical Society.

Cagney drops Harlow off at Wilshire, west of the corner of Dunsmuir, with the Wilshire Tower Building in the background. California State Library

Delighted to get Jean Harlow’s phone number, Cagney dances a little jig, sadly blocked from view by extras walking in front of the camera. The Oscar Balzer shop appears in both images. California State Library.

Click to enlarge. 1940 view looking NW at the Miracle Mile – (1) driving past Hauser, (2) dropping Jean off across from the Wilshire Tower Building, (3) Jean’s close-up, (4) crossing Wilshire on Detroit, and (5) Jean’s intro shot by the Dominguez Building. The E. Clem Wilson Building on La Brea stands to the lower right. USC Digital Library

A 1930 view west of the filming sites along Wilshire – LAPL.

Bonus : Larry Harnisch writes on his The Daily Mirror blog that his “brain trust” Craig Deco, Lee Rivas and Nathan Marask determined that the interior of the May Co. department store appears during The Public Enemy as young thugs Tom and Matt slide down the center of an escalator to escape the cops.

The interior of the May Co. department store – thanks to LA Daily Mirror.  LAPL

A view of the intersection of Wilshire and Detroit today.