Mary Pickford and the Silent Stars Meet at One Hollywood Corner

Click to enlarge.  Mary Pickford peers from an alley towards the corner where Mabel Normand waits to confront Charlie Chaplin and Marie Dressler in Tillie’s Punctured Romance (1914).

America’s Sweetheart, Canadian-born Mary Pickford, was a staunch supporter of the World War I Liberty Bond campaign.  Aside from selling millions of dollars of bonds at various rallies across the country, she also encouraged bond sales by starring in a patriotic movie entitled Mary Pickford 100% American (1918).  You can see the movie (HERE).

The movie first caught my eye because early scenes depict the Abbot Kinney amusement park pier in Venice, California.  As shown in my books, the pier had appeared previously in Charlie 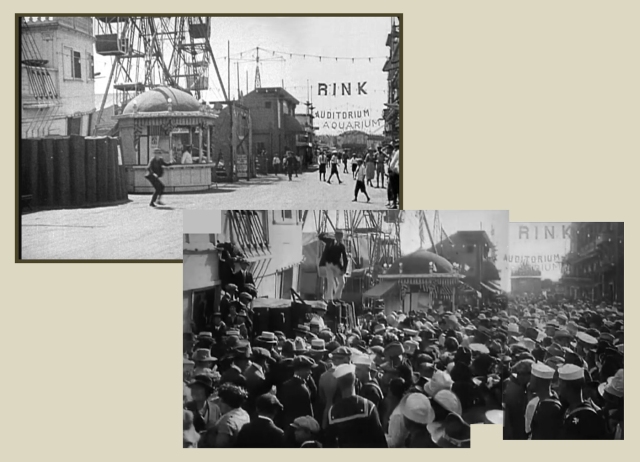 Above, Harold Lloyd evades the police in Number Please?, while below Mary listens to a man selling Liberty Bonds in 100% American.  Both views look west down the Abbot Kinney Pier, past the Ship Cafe at the left. Chaplin filmed The Adventurer at the far west end of the pier.

Throughout the movie Mary forgoes simple expenditures in order to save enough to purchase a bond.  While waiting in line at the bank to make her purchase, Mary momentarily loses her bankroll, and accuses another patron of stealing it from her.  While a bank guard harasses the falsely accused man, Mary recovers the money, makes her purchase, and dashes from the bank, calling out to the guard that it was all a mistake before she embarrassingly flees the bank and runs down the street. 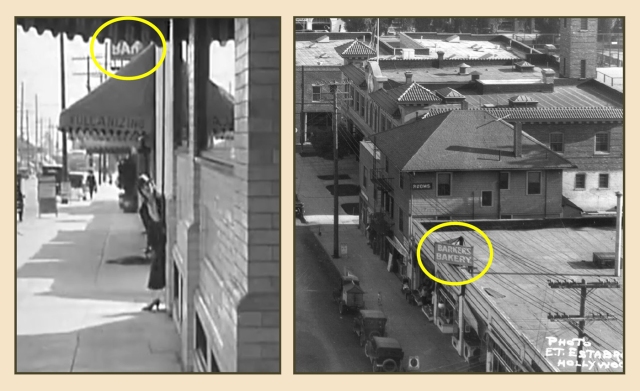 After falsely accusing a man, Mary sheepishly peeks from an alley corner on the west side of Cahuenga.  Down the street behind her is a sign for BARKER’S BAKERY.  The Fremont Hotel (with the ROOMS sign) further down the street appears in a Douglas Fairbanks movie, below.

When I noticed the distinctive BARKER’S BAKERY sign on Cahuenga above Mary’s head, I realized that the bank where Mary purchases her bond once stood at the corner of Hollywood Boulevard and Cahuenga – the intersection where so many other early movies were filmed.  I report in prior posts (HERE) and (HERE) how Chaplin, Keaton, and Lloyd all filmed near this corner, but now we can add Mary Pickford to the mix.

Harold Lloyd’s future wife Mildred Davis in Never Weaken (1921), a policeman in the Christie comedy Hubby’s Night Out (1917), and Mary are all standing at the same alley corner on the west side of Cahuenga.  As shown further below, the alley Buster Keaton used in Cops (1922) stands on the east side of Cahuenga.

As shown below, Douglas Fairbanks filmed a building-climbing stunt from Flirting With Fate (1916) just a bit down the street from Mary.

Click to enlarge.  This view shows the west side of Cahuenga – the corner of Hollywood Blvd. at the right.  Douglas Fairbanks climbs up the front of the Fremont Hotel that stood south of the bakery.

Click to enlarge. Clockwise from the bottom, Harold Lloyd in Why Worry? (1923); Mabel Normand, Charlie Chaplin, and Marie Dressler in Tillie’s Punctured Romance; Buster Keaton in Cops; Douglas Fairbanks in Flirting With Fate; and Mary Pickford in 100% American.

My thanks to Jonathan Kaplan, at Vintage Venice Tours, for bringing this film to my attention.  Below, Mary’s alley on the west side of Cahuenga.  The bank building to the right was expanded two floors higher, with an Art Deco makeover, in the late 1920s.