Johnny Depp and Buster Keaton at the Cops/Ed Wood alley

Posted on September 8, 2013 by John Bengtson

To go with the Hollywood’s Silent Echoes presentation I gave last month at the Cinecon 49 Classic Film Festival at the Egyptian Theater, I prepared a tour of nearly 50 silent-era Hollywood landmarks and film locations you can access HERE.  During the lunch break I lead a group of 40 or so hearty souls a few blocks east from the theater to the 1700 block of Cahuenga, where we braved the extreme heat to explore many places where Chaplin, Keaton, Fairbanks, and Lloyd filmed scenes from their classic movies.

The tour ended at the north end of East Cahuenga Alley (the locals call it “EaCa Alley”), running parallel between Cahuenga and Cosmo, where Charlie Chaplin filmed early scenes from The Kid (1921), Buster Keaton filmed Cops (1922), and Harold Lloyd filmed Safety Last! (1923).  Three kings of silent comedy, and three iconic masterpieces inducted into the National Film Registry, all filmed at the same spot in Hollywood, a 6-in-1 location described in my post HERE.  If any one site in Hollywood deserves a star of recognition, this would be it.

During the tour, someone correctly mentioned that the same alley had appeared in the 1994 Tim Burton/Johnny Depp eponymous biopic Ed Wood.  Depp had won accolades the prior year for playing a free-spirited character, inspired by Keaton and Chaplin, in the 1993 comedy/drama Benny and Joon.  As shown above, Keaton and Depp both filmed exterior scenes at the same Cosmo Street location in Hollywood seventy years apart.  (To aid with the comparison I reversed the Depp scene, which was filmed looking south, to match the Keaton scene filmed looking north.)

Looking west or northwest at a matching corner post in Keaton’s Neighbors (1920) and in Ed Wood.

During another scene in Ed Wood frustrated actress Vampira (played by Lisa Marie) exits a bus at the north end of EaCa Alley looking for Mr. Wood’s studio.  Above, the extant iron post and steel beam supporting the back corner of 1644 N. Cahuenga appears both in Buster’s earlier short Neighbors and in Vampira’s close-up.  The corner (left) is now part of the Spice Hollywood Bistro, that features patio dining where the great comedians once filmed.  Below, Chaplin runs north up EaCa Alley towards the same Spice corner – his position is nearly identical to Vampira’s placement in the alley below.

Matching views looking north up EaCa Alley from The Kid and Ed Wood.  Chaplin and Vampira are in essentially the same spot.

Below, the south entrance to EaCa Alley. 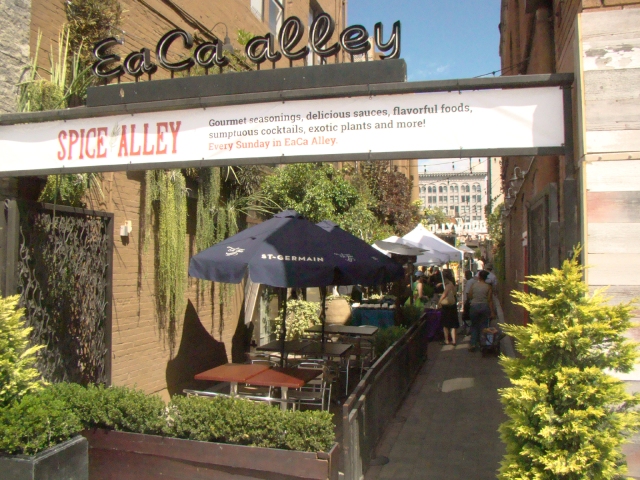 You can read how Chaplin, Keaton, and Lloyd each filmed a masterpiece at the north end of EaCa Alley at this post HERE.