The image of Harold Lloyd hanging desperately from the hands of a skyscraper clock during Safety Last! (1923) is one of the great icons of film history.  Using maps, aerial views, and vintage photographs, my book Silent Visions shows how Harold filmed each of his five stunt-climbing comedies within the downtown Los Angeles Historic Core, while documenting the burgeoning urban skyline as it appears in the background of his films. [Note: I will be introducing Safety Last! on June 25, 2016 at the Orpheum Theater as part of the Los Angeles Conservancy’s Last Remaining Seats.]

The closing scene from Safety Last! (left) was filmed on the roof of 908 S. Broadway, the same building where the clock stunt climbing set was built. The same roof (right), now supporting the steel girder foundation for a large antennae, appears during the Criterion Collection Locations and Effects mini clip.

The slides below show how the many Safety Last! stunts were created, and may be downloaded further below as a 14 MB PowerPoint presentation.  You can also access a self-guided walking tour of the downtown locations appearing in Safety Last!, Never Weaken, and Feet First. (In all Lloyd employed 17 downtown buildings during his “thrill” comedies – see a PDF list of descriptions here).

[Note: on the ground, Charlie Chaplin, Buster Keaton and Harold Lloyd filmed scenes from their masterpieces The Kid (1921), Cops (1922) and Safety Last! at the same Hollywood alley you can still visit today.] 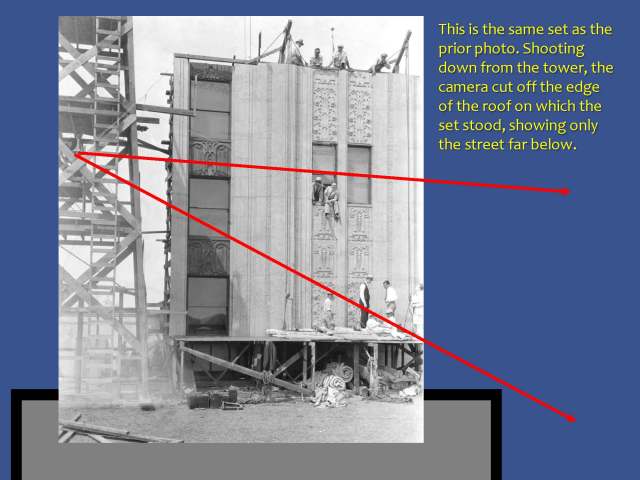 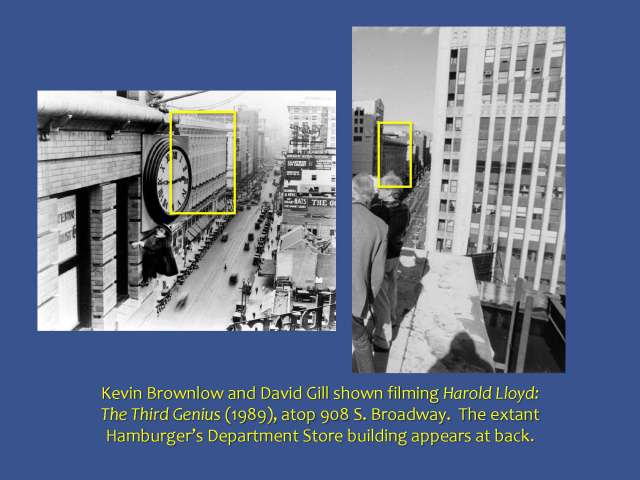 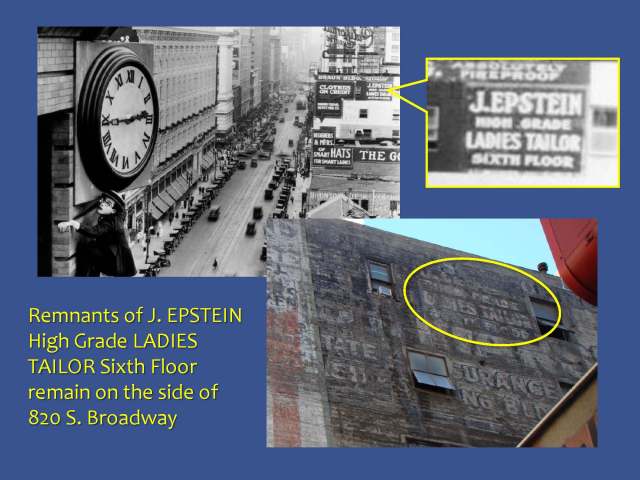 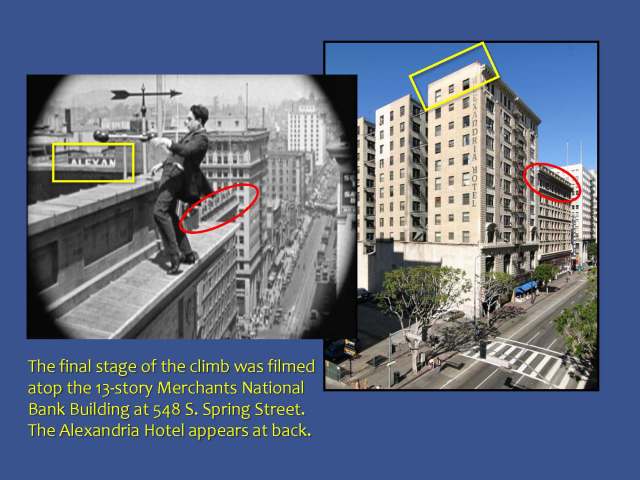 Here is the link to download the PowerPoint.  Most of the slides are animated, so wait a moment each time before clicking the “next” button. 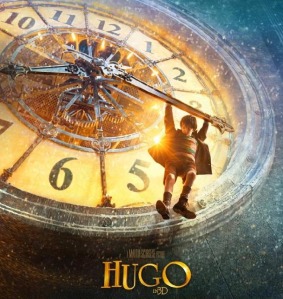 The recent multiple Oscar-winning movie Hugo pays tribute to Safety Last!; first by including a clip of the Lloyd movie within the film, and also when the young hero Hugo Cabret finds himself hanging from a train station clock. Hugo (C) 2011 Paramount Pictures

You can also check out my other posts about Safety Last! here.

A short segment from the Locations and Effects 2013 documentary with Academy-Award winning effects supervisor Craig Barron and the author filmed for the Criterion Collection release of the Safety Last! Blu-ray appears below.

To see where Harold filmed his amazing comedies, be sure to check out my book Silent Visions.

If you need a good laugh, or want to raise your spirits, just listen to Michael Mortilla’s audio-only recording of the audience laughing and squealing with delight while watching Safety Last!  It’s great to play as background music – the swells and squeals of laughter just grow and grow.

The site of the clock set, above, at 908 S. Broadway on Google Maps.