New locations from The General

On July 20, 2011, Kevin Brownlow screened Buster Keaton’s Civil War comedy The General (1927) as part of the Academy of Motion Picture Arts and Sciences “Summer of Silents” film series, at the Samuel Goldwyn Theater in Beverly Hills.  Before the screening I gave an overview tour of the historic Los Angeles locations appearing in the classic films of Charlie Chaplin, Buster Keaton, and Harold Lloyd, and afterwards I gave a brief overview of locations appearing in The General, which reports the location of two additional structures appearing during the film.  You can find a complete report about The General film locations in my book Silent Echoes.

The Academy posted my presentation here.

Keaton filmed The General in Cottage Grove, Oregon during the summer of 1926, and staged many traveling shots from the film along the parallel tracks of the Oregon Pacific & Eastern Railroad, which ran as a double line for a half mile or so just east of town.  During filming, a camera train rolled along on the north track, keeping pace with the actors and prop trains traveling along the parallel track to the south.  These parallel tracks, and the setting where the Union camp set, and the Marietta and Chattanooga sets were built, were all situated barely two blocks from the Bartell Hotel where Keaton and crew stayed in town during filming.  The former rail line is now used as a bicycle trail.

This simplified map shows the Bartell Hotel on W. Main Street (oval), Keaton’s headquarters during filming, stood just blocks from where the sets, and the parallel tracks used for all of the tracking shots (box), were located in Cottage Grove due north of E. Main Street.  The small red box at the far right marks the relative spot of House 3 (see below).

Keaton staged the Southern retreat scene along an open wheat field between the OP&E tracks and E. Main Street, running east-west to the south of the tracks.  Several houses along E. Main appear during the scene, as shown here. 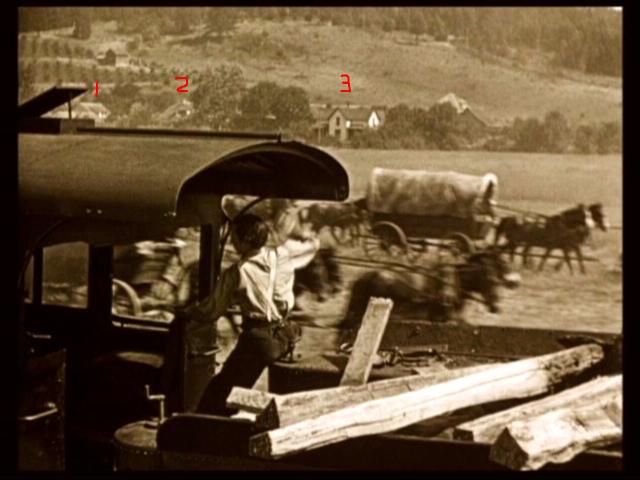 During the Southern retreat scene, three houses along E. Main Street appear during this tracking shot viewed looking to the SE.

The Houses 1, 2, and 3 all stood on East Main.  House 2 still stands on the SE corner of S. 18th Street and E. Main, while House 1 stands next door further east.   You can see that House 1 has a sloping roof facing right (west), with a protruding two window dormer facing west, while House 2 has three window dormer facing north, with a chimney to the left (east) of the dormer, matching the Google Street View details below.   Unfortunately the prominent House 3, on the SW corner of Main and 18th, is no longer standing.

The Cottage Grove Historical Society is hosting a weekend festival celebrating the 85th Anniversary of the filming of The General in Cottage Grove on August 5 and 6, 2011.  You can learn more the festival here.

5 Responses to New locations from The General