With a can of paint and a cooperative landlord, ladies tailor Jacob Epstein bought himself a bit of movie immortality.  During the iconic skyscraper clock sequence in Harold Lloyd’s 1923 master thrill comedy Safety Last!,  you can clearly see, visible in the background, Mr. Epstein touting his services as painted on the side of the extant building standing at 820 S. Broadway, where he practiced his trade from Room 600 on the 6th floor.   Although his name is now obscured, nearly 90 years later you can still read the lettering “LADIES TAILOR” on the side of the building.  Ironically, while his association with Broadway remains to this day, Mr. Epstein only worked there for a few years, and had already moved to a new shop on Hope Street nearby when the movie premiered. 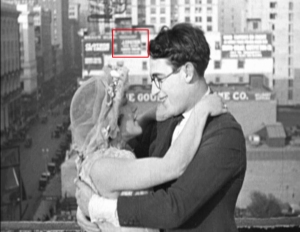 Atop the extant building at 908 S. Broadway, the same rooftop used for the clock sequence.

But thanks to Mr. Epstein’s sign appearing in the background, we know that part of the sequence was filmed atop 908 S. Broadway, where the famous clock sequence was also filmed.

In conjunction with the sold-out Los Angeles Conservancy “Last Remaining Seats” screening of Safety Last! on June 29 at the Orpheum Theatre, I have posted here a self-guided walking tour of the downtown Los Angeles locations Harold Lloyd used in Safety Last!, along with locations from Lloyd’s climbing stunts in Never Weaken (1921) and Feet First (1930), and behind the scenes images showing how Lloyd staged his famous skyscraper-climbing sequences.

4 Responses to Safety Last! Mr. Epstein’s Writing on the Wall