Buster Films Stunt Beside His Own Studio

Not only did Buster perform all of his own stunts, at times he performed stunts for other cast-members as well.  One famous example is from Sherlock Jr. After Buster accepts a ride on the handlebars of a motorcycle, a bump in the road knocks the driver to the ground, leaving Buster to ride on alone, unaware that no one is steering the bike.  Buster dressed as the driver and took the fall for the shot, landing with his legs characteristically spread eagle. 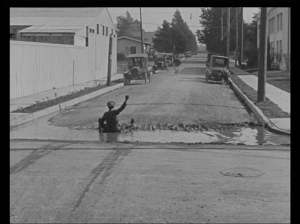 Keaton sits in the gutter watching the motorcycle drive away east down Eleanor.

By studying aerial photos of the Keaton Studio taken around the time Sherlock Jr. was in production, we can see that Keaton filmed this stunt within view of the front porch of his studio office.  The stunt was filmed looking east down Eleanor at Lillian, with the studio office off-camera to the right.  The same intersection, viewed looking south, also appears in Sherlock Jr., as Buster and Ward Crane cross Lillian heading east.

This circa 1924 view was taken around the time Sherlock Jr. was in production. The view looks south down Lillian Way, at Eleanor. The Keaton Studio is to the upper right. Keaton rode the motorcycle, east, from right to left, down Eleanor. You can see the gutter where Buster fell is wet.

4 Responses to Buster Films Stunt Beside His Own Studio