Universal’s 1941 production Never Give A Sucker An Even Break features W.C. Fields in his final starring role. Directed by Edward Cline (Buster Keaton’s early co-writer/director) the movie ends with a frantic Keystone Kops-style car chase around the produce/warehouse district south of downtown, along the newly opened Cahuenga Pass “freeway” in Hollywood, in Glendale, and then finally along Riverside Drive near Universal. The fun starts when Fields mistakes a matron seeking a ride to visit her daughter at the maternity hospital as being in labor herself. Fields drives with her so recklessly that she faints from shock, spurring Fields to drive even faster. With so many identifiable locations the movie requires two posts. [Note: as a fan of Fields’ dry humor I was relieved (?) to learn from biographer James Curtis (W.C. Fields: A Biography) that Universal imposed this uncharacteristic slapstick

sequence on Bill, which was not in his original script. Read more details about who actually made the sequence at the end of this post. Also, Charlie Chaplin filmed Work (1915) among similar warehouses a few blocks further north – read more HERE.]

Before jumping to Glendale and parts north to be described in post 2, the first sequence of the race to the hospital was methodically staged in a warehouse district SE of downtown, bounded by Alameda and Mesquit to the west and east, and E. 6th and E. 7th to the north and south (see above). There are nearly two dozen locations depicted here, with a remarkable number of buildings still standing. 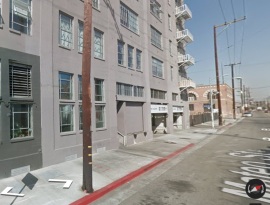 1)  Above, the race to the hospital begins south down Mateo Street before turning right, west onto Industrial Street. The red brick building at back, prominent in the modern view, was the former Hill Brothers Coffee plant, at 635 Mateo, featured in scene 7) below. 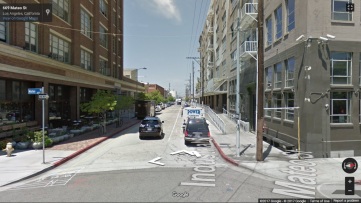 2)  The car then screeches around the corner from Mateo to west on Industrial. All of the major buildings pictured here in the film are still present, including the former National Biscuit Co. factory on the left and the Star Truck and Warehouse Company on the right.

3)  The car then races west down from the 7th Street Bridge towards the corner of Santa Fe past the large brick Bailey-Schmitz building, a former mattress manufacturer. 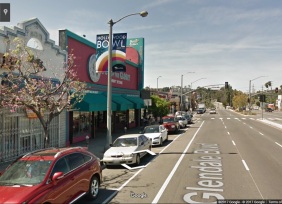 5)  A brief insert scene jumps from downtown to the former Atwater Market (center white building) at 3158 Glendale Boulevard, looking west, with the Pacific Electric trolley tracks and a light-colored convertible (see scene 7) below) to the right. In the far distance stands the Hyperion Avenue Bridge, to be discussed in part 2 of this post. 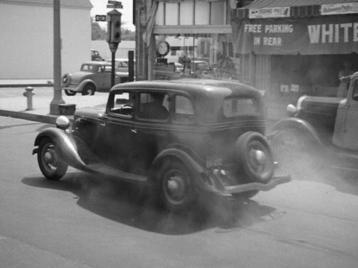 6) Scene 5) above continues with the camera panning left (east) towards the corner of Garden Avenue in Glendale, where Fields’ car screeches to a stop and reverses suddenly.

7)  Back in downtown, the light-colored convertible on Glendale Blvd. in scene 5) crashes beside the Hills Brothers Coffee plant at 635 Mateo, looking north. 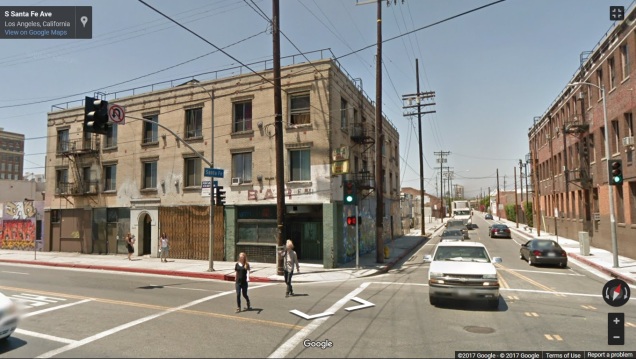 8)  Back at the corner of Santa Fe and 7th, a cop jumps aboard Fields’ running board (upper left and right) to guide him to the hospital. You can still read “BAILEY-SCHMITZ” along the roof of the upper right image.

9)  The car races north along Mesquit, from 7th towards 6th, as the camera pans quickly right to left. The former warehouses along Mesquit have all been replaced. The center movie frame shows at back the descending deck of the 7th St. Bridge, still seen in the right modern view. 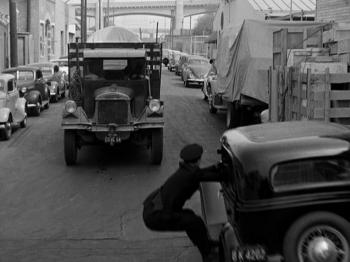 10)  Traveling north along Mesquit, the cop will soon lose the seat of his pants. At back stands the former 6th St. Bridge. Built in 1932 with defective concrete, it was demolished for safety reasons in 2016.

11)  A conspicuous “HOLLYWOOD BLVD” bus turns left (east) from Santa Fe (see street post marked upper left) onto Jesse Street, with an outstretched wooden arm turn indicator that will snare Fields’ cop. The camera quickly pans right along with the bus, then pans back quickly left following the path of Fields’ car, with the now seatless cop still aboard. The north corner of the former Ice & Cold Storage Warehouse on Mesquit visible in scene 9), (box, lower left), appears at back in the far right shot (box) looking east along Jesse towards Mesquit.

12)  With the cop now ensnared on the bus left-turn indicator, this right to left panning shot follows Fields’ cop-free car west along Jesse from Santa Fe. The tall building to the left of each image stands on the NE corner of Jesse and Mateo. 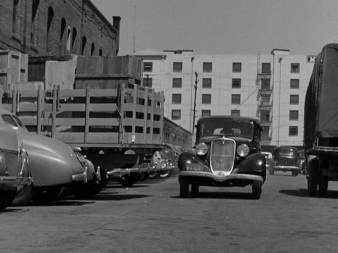 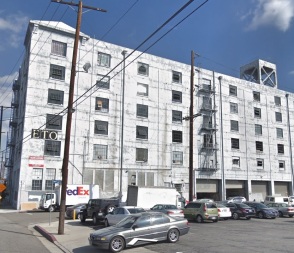 13)  Looking east, the car careens toward the camera along former Produce Street, parallel to and just south of E. 6th Street, with the extant Metropolitan Warehouse at the SE corner of E. 6th and Mill Street standing at back. At the time two very wide private streets, Produce Street and Wholesale Street, were configured around three long, narrow rows of warehouses, the northern-most row appearing at left. Two wide modern rows of warehouses, with different footprints, have replaced the former trio of buildings. 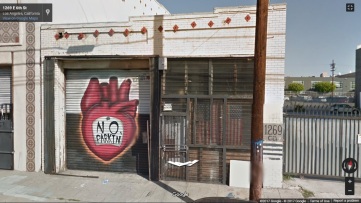 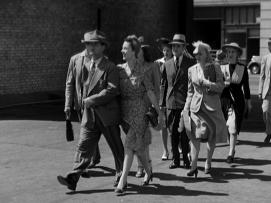 14)  These oblivious pedestrians march south from 6th Street onto Produce Street through an arcade in the narrow warehouse row along the south side of 6th (there is an upper floor above them over the entrance). The building directly across from the former arcade entrance, 1275 E. 6th, is still standing, but given the camera angle does likely not appear in this shot. The next building to the west (left) has been demolished, precluding comparison, and the next building further west, 1269 E. 6th Street, pictured here, could be the building visible through the former arcade, but is likely not. Given the geometry, my sense is the left side of the demolished building across the street is what appears in the shot. 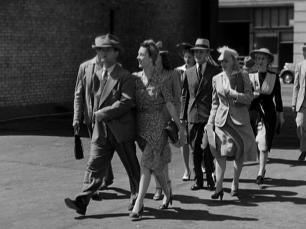 15)  The pedestrians flee the swooping car so quickly that they lose their shoes on the back (Produce Street) side of 1280 E. 6th Street, the right (east) edge of the former arcade. Note: for some reason the shot of the oncoming car (lower left) is reversed when it appears as shown here in the film. (The license plate reads backwards!). For scene 13) above I flipped the image to allow for a true then and now comparison. 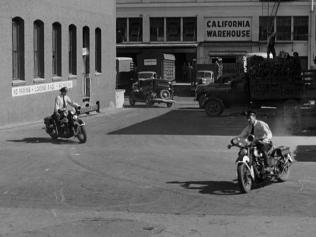 16)  Looking south, the camera pans right to left along the opposite side of former Produce Street, from the Certain Teed building supplies company at 1228 Produce Street, towards a break in the street revealing the former California Warehouse further back, standing at 1248 Wholesale Street, running parallel to Produce Street further south. These two private streets were reconfigured extensively when the three rows of warehouses defining them were replaced with two wide rows of buildings. Produce Street was originally quite wide, with numerous railroad tracks running through it, as seen above. 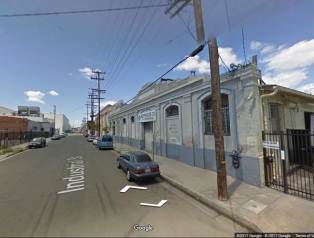 17)  Fields has now acquired a pair of a motorcycle cops escorting him to the hospital. Here they travel east along Industrial Street crossing Mill Street. During this shot they pass a series of elaborately detailed brick buildings, from around 1581 to 1719 Industrial Street, that are all remarkably preserved. 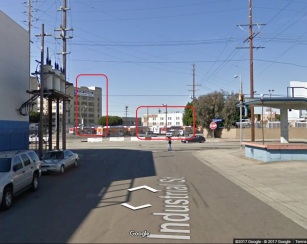 18)  The traveling shot continues east along Industrial, here starting from the west end of the street at the corner of Alameda – the boxes mark matching buildings. I’ve noticed that whenever a movie makes use of a long traveling shot along one street, they nearly always edit the brief shots out of order. Scene 18) should precede scene 17) geographically. 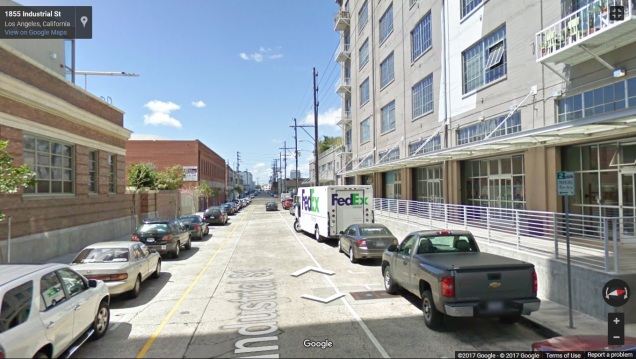 19)  Jumping from the west end of Industrial Street to the east end, the same view appearing earlier in scene 2). The matching larger images show the gate (and railroad freight) entrance to the National Biscuit Co. factory, the smaller images show the former Standard Lumber Company at 1848 Industrial. The somewhat modernized Star Truck and Warehouse Company buildings appear at right.

20)  The warehouse segment concludes as Fields, via rear projection, travels north up Mateo Street towards the Maxwell House Coffee plant near 4th Street. 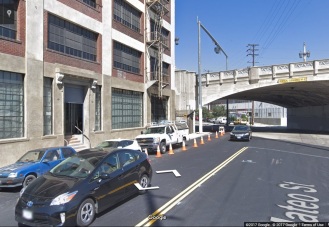 22)  The Maxwell House building has been on my radar ever since I first noticed it appears in Buster Keaton’s Go West (1925), upper right, filmed showing its 4th Street side. Fields travels left to right in the main photo (LAPL) past the entrance on Mateo towards the corner of 4th. The 4th Street Bridge was constructed in 1930, before this photo was taken. Notice the “Good to the Last Drop” billboard behind Fields at the lower right.

When viewed overall on a map you can see how efficiently they used these few streets. Were they perhaps constrained by a filming permit to only these blocks? My thanks to reader David Sadowski for suggesting I give this film a look – I hadn’t watched it in years. 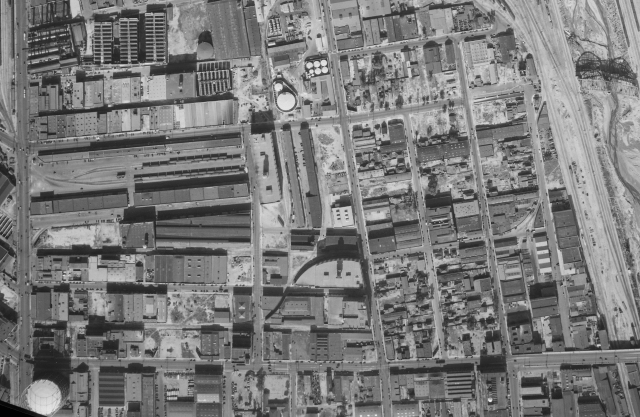 Update – noted author James Curtis (W.C. Fields: A Biography) writes that Fields didn’t include the car chase in the original screenplay, which was written under his supervision. “We will require the elimination of the ‘motion picture’ within the story,” wrote Universal’s Edward Muhl in his response. “We will also require an action sequence in order to build a climax to the picture.” The chases for both SUCKER and BANK DICK were directed by Ralph Ceder (1898-1951), who started with Sennett and wrote and directed short comedies throughout the silent era. In talkies, he was mostly a second unit director specializing in action sequences. He did a lot of work at Universal, then settled in at MGM, where he contributed to A GUY NAMED JOE, among others. Ceder’s assistant on the SUCKER sequence was Melville Shyer, whose son is the director Charles Shyer.

According to continuity records, Fields shot his first scenes for the film on July 7 and finished on August 16, 1941. The process shots needed for the chase sequence were made on August 14, 15, and 16. Fields dictated a detailed reaction to the first cut of the film on September 4: “The chase is far too long and overdone. Policeman on fender losing his pants and finally getting caught on bus is not funny. The shoes on the street is cheap and unfunny, and the man getting knocked first one way and then the other and waving his arms and legs is antiquated comedy. The hook and ladder is drawn out, therefore rendered unfunny. The line, ‘What a beautiful view of the California climate,’ is omitted” (this line is in the final cut). After the film’s preview, which didn’t go well, Fields added the following on September 18: “The chase can be cut to advantage of the film. It is hilarious but a bit too long.”

Below, 7th and Santa Fe – you can read Bailey-Schmitz along the right roof line.