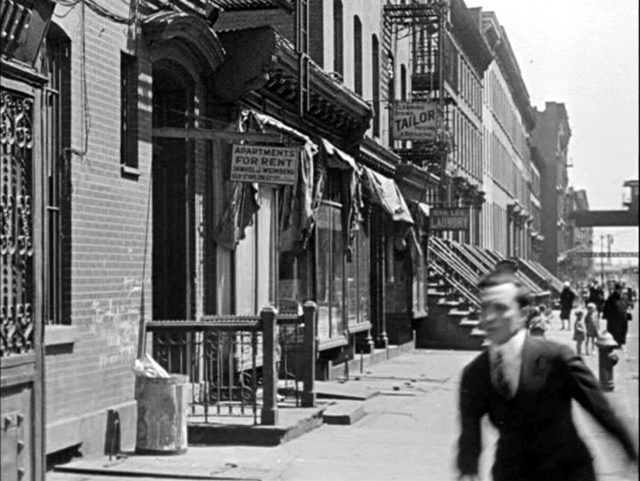 As I spell out in my book Silent Echoes, when Marceline calls Buster to tell him her prior commitment has changed and she is now available to meet him, Buster is so eager that he bolts out the door while she is still talking on the phone, and races down many city blocks, including 5th Avenue, and beside Bergdorf-Goodman (see post) to her place. When she realizes he is no longer on the line, she hangs up in frustration, and turns around to find Buster already standing behind her – “I hope I’m not late.”

When TCM recently broadcast The Cameraman (I now receive TCM in high definition), I was stunned by how beautiful the print looked, and made a point to study Buster’s apartment scene, and the Apartments for Rent sign behind Buster’s entryway. Watching it back and forth in slo-

I immediately contacted Bob, as he had investigated Buster’s apartment before, although based on my misunderstanding at the time that the name was “Weisberg” not “Weinberg.” Bob quickly reported that the 1929 Manhattan Address Directory had a listing for a “Saml J Weinberg rl est” at 859 3rd Ave, at the NE corner of East 52nd. This phonebook entry clearly matched the sign, explaining why Sam was advertising apartments for rent. Since Second Avenue had elevated train tracks at the time, standing at the corner of 3rd and 52nd, looking east, you would see tracks in the background. 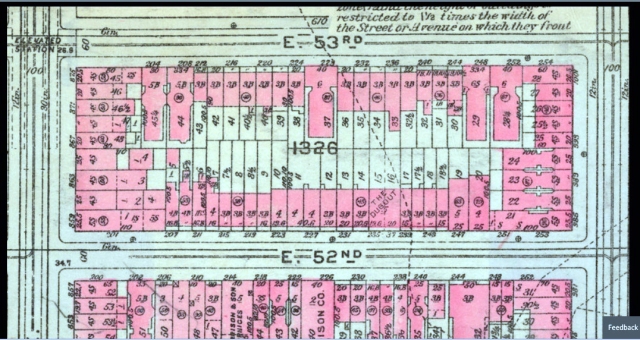 Click to enlarge – Buster’s doorway was at 201 East 52nd, near the left corner.

Bob also sent a vintage map of the block. Knowing that Sam’s office was on the corner of 3rd, if Buster exited the E 52nd St side of Sam’s building, then per the map we’d expect to see a one story building immediately behind Buster, flush with a several story building immediately behind the one story building, with a sidewalk fire plug in front of the flush buildings, then a long row of multi-story buildings all set back further from the sidewalk, then a 5 story building further back that again projects flush to the sidewalk, and then elevated tracks. These elements match exactly both in the movie frame and on the map. Although a modern glass high-rise stands there today, we now know the humble entranceway to 201 E 52nd St once portrayed Buster’s Manhattan apartment.

With this post I now have a dozen postings about Keaton filming The Cameraman and Harold Lloyd filming Speedy in New York. Here’s an INDEX of these other posts. 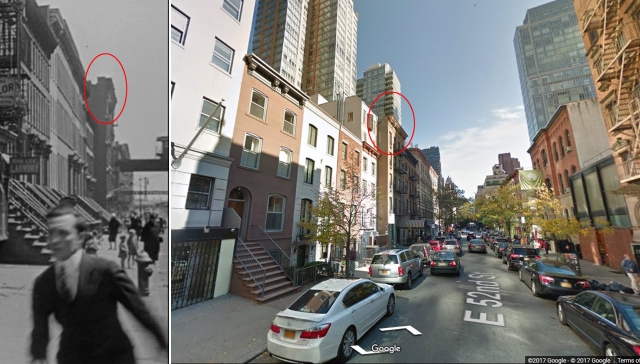 Thank you Bob for more incredible detective work. Bob’s popular and highly recommended website PopSpotNYC.com explores the visual archeology of “where interesting events in the history of Pop Culture took place; like album cover shots, places where movies and tv shows were filmed, and sites on which paintings were based.”