Buster with a Bullitt – Keaton and Steve McQueen’s SF Stunts

Recent posts show Buster Keaton crossed paths with Orson Welles in Venice, California (The High Sign and Touch of Evil), and with Alfred Hitchcock in San Francisco (Day Dreams and Vertigo). This time Keaton and ‘King of Cool’ actor Steve McQueen cross paths filming stunts in the City by the Bay.

Greenwich at back. These comparison views above highlight San Francisco’s decades-long process of acquiring city landmarks. The striking twin church spires appearing at back in the Bullitt shot belong to the Saints Peter and Paul Church at 666 Filbert Street (how did they get that address?), completed in 1924. The church doesn’t appear in the Keaton frame because Buster filmed there in 1922. (Photo: Kjetil Ree.)

The church spires don’t appear below in this 1922 Day Dreams view north at Washington and Powell (visible at back in the modern view) for the same reason. 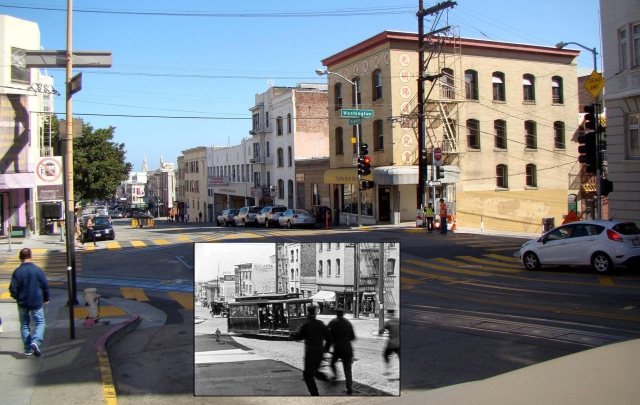 Washington and Powell today – the Saints Peter and Paul spires peek out at in the far distance.

While Keaton’s views lack the church spires, the Bullitt frame also lacks a landmark, one of the City’s most iconic, the Transamerica Pyramid. Once the City’s tallest building, it dominates any view looking SE down Columbus today. But the Pyramid is nowhere to be seen with McQueen because the tower didn’t begin construction until 1969, the year after Bullitt was released. (Photo: Daniel Schwen.) 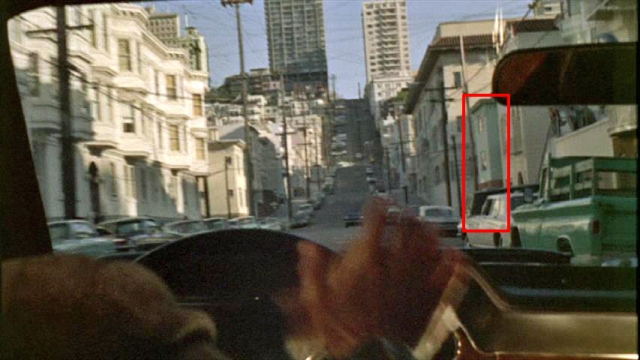 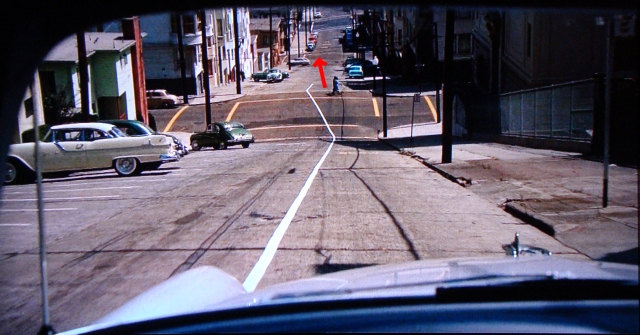 From Vertigo, a view east down Lombard, and the block Buster fled (arrow) in Day Dreams. In the Bullitt scene above, McQueen drives left to right along Jones past Jimmy Stewart’s red chimney apartment on the left corner. Read more about Keaton and Vertigo HERE.

Aside from his stunt scene falling off a cable car, Keaton filmed another Day Dreams scene at nearly the same spot, looking east on Lombard from Columbus, where Buster grabs hold of a passing cable car. Shown here, Buster stands in the intersection of Columbus and Lombard, steps from where he later falls off the car. Here too, Keaton’s frame lacks another City landmark – the Coit Tower monument appearing at the upper right was completed in 1933. (Photo: Kkmd.) 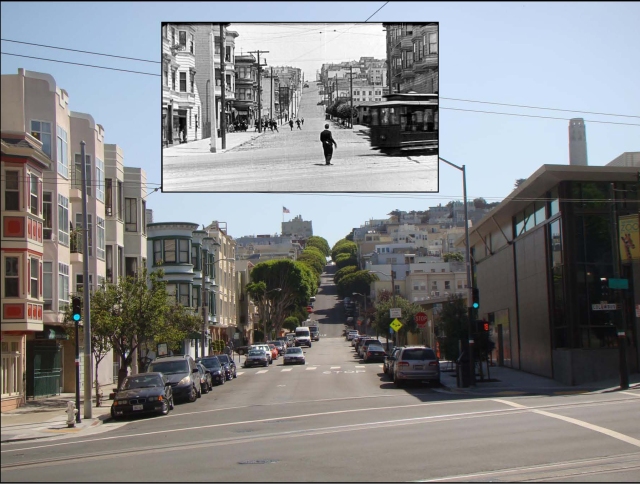 Matching views east along Lombard from Columbus (look at all the available parking in 1922!). Coit Tower was completed in 1933.

Today the Transamerica Pyramid looms at back over Columbus Avenue.