During Cops (1922) Buster spies Big Joe Roberts’ dropped wallet in front of the towering Bergstrom estate, once standing at 590 N. Vermont, featured in Harry Houdini’s The Grim Game (1919). You can view a TCM clip of the gate HERE and HERE. 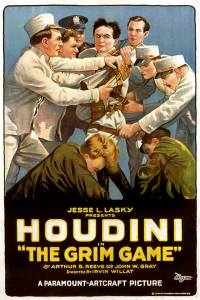 Buster Keaton writes in his autobiography that famed magician and escape artist Harry Houdini gave him his nickname after witnessing 6-month old Keaton tumble unhurt down a flight of stairs. While likely more myth than fact,* Harry and Bess Houdini did travel with Buster’s parents during their early medicine show days, and Harry’s daring stunts and escapes certainly echo in Buster’s films. Moreover, Keaton pays homage to Houdini in the opening credits of Buster’s most famous short film, Cops, the only movie in Keaton’s oeuvre to begin with an

attributed quote. By remarkable coincidence (or by design?) Keaton’s Cops crossed cinematic paths with Houdini’s debut (non-serialized) feature film, The Grim Game, screening at the San Francisco Silent Film Festival’s special A Day of Silents held at the Castro Theater this December 5.  You can see movie clips featuring the Houdini/Keaton gate at the TCM Website, HERE and HERE. 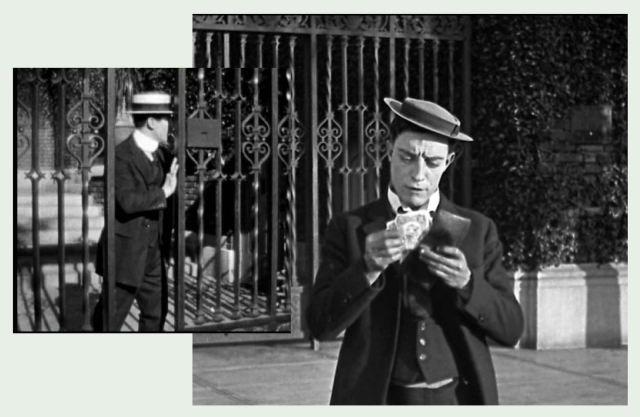 Houdini and Keaton at the same Bergstrom estate gate at the SE corner of Vermont and Clinton.

Billed as a stirring story of love, mystery, and dare-devil adventure, The Grim Game was scripted to maximize opportunities for Houdini to escape from various traps and shackles on screen. Many scenes were filmed at the home of noted architect Edwin Bergstrom, later home to theater magnate Alexander

Pantages, before it was razed in 1951 to build a Jewish community center, now home to West Coast University.  Above, Houdini filmed many scenes by the estate’s motorized sliding gate (a comic foil that also trapped Snub Pollard during the early Hal Roach Studio comedy Fresh Paint (1920) upper right).  Buster staged the opening scenes from Cops, where he appropriates Big Joe Roberts’ wallet, by inter-cutting shots filmed beside the estate gate AND at the corner of Sunset and Detroit, over 4 miles away (click to enlarge blended frames at left).  I describe the Sunset filming spot from Cops HERE.

After searching years for photos of the estate prior to its destruction, The Grim Game supplies priceless views of this lost landmark, placing it in context, while even allowing us (at right) to see inside the gate where Buster filmed.

After documenting how Charlie Chaplin filmed The Kid (1921), Buster Keaton filmed Cops, and Harold Lloyd filmed Safety Last! (1923) all at the same East-Cahuenga alley that you can still visit in Hollywood today, I was floored to see that Harry filmed a brief scene there too.  As shown above, Houdini filmed there first!

The Grim Game shows the rickety stairway that once stood at the west alley entrance on Cahuenga, also seen in these Christie comedies All Jazzed Up (1920) at left, and Hubby’s Night Out (1917) Cinematek.

Looking west towards Cahuenga, these views from Gale Henry’s Gaumont Co. short The Detectress (1919) and Keaton’s Neighbors (1920) show the back of the rickety stairway, removed before Buster returned to film Cops.

[Update] Thanks to John Cox, and his wonderfully detailed and entertaining Wild About Houdini blogpost, we now know there was a THIRD filming connection between Keaton’s Cops and Houdini.  Although these scenes do not appear in the surviving cut of The Grim Game, John provided me with publicity photos of Houdini staged along the New High Street retaining wall of the former Los Angeles County Courthouse – the same street where a gang of cops sneak up behind Buster in Cops.  (As I explain in my next post, Houdini filmed at the LA County Jail, on Temple Street across from the court.) The red oval above marks the street level tunnel entrance to the court house,

framed by vegetation, while Houdini posed with co-star Ann Forest along the wall beside one of the decorative lamps (yellow oval above).  At right, Doug Fairbanks filmed a scene from The Matrimaniac (1916) atop this same distinctive retaining wall.

Houdini’s production received tremendous advance publicity when two airplanes crashed mid-flight while a stunt man was filmed transferring between the planes. Fortunately no one was hurt, but the accident, captured on camera, was a publicist’s dream, and Houdini himself was later touted as being the stuntman who survived the crash.

The much publicized mid-air transfer from The Grim Game. LAPL.

Much of Los Angeles between Hollywood and the coast was undeveloped in 1919 during the time of filming. The above shot of the mid-air transfer reveals early Beverly Hills in the background, the oval marks the corner of Wilshire and Rodeo Drive.  Buster filmed this scene (left) from The Scarecrow (1920) at 618 Beverly Drive towards the middle of the aerial photo above. 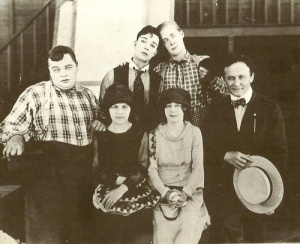 The Grim Game was nearly lost forever, but thanks to the restoration efforts of Rick Schmidlin, in association the New York University Libraries, as sponsored by the Turner Classic Movie Channel, we can witness once again the magic of Houdini on film this coming December 5 at 3:00 p.m. at the Castro Theater. Mr. Schmidlin will introduce the screening, to be accompanied by Donald Sosin.

My following post shows the Los Angeles Historic Core buildings appearing in The Grim Game, including Houdini’s thrilling straight-jacket escape from the roof of the former Harbour Apartments.

*Keaton biographer Marion Meade writes contemporary newspaper accounts show actor and family friend George Pardey was credited in 1904 with giving Buster the name, and that references to Houdini as the source did not appear until years later. The Houdinis and Buster’s parents Myra and Joe were friends – Meade writes Joe treated Harry as a younger brother, affectionately calling him “Boots.”

The TCM website has two clips showing the former Houdini/Keaton gate at 590 N. Vermont.   You can access them HERE and HERE.