Leave it to Skokie, and Beaver, and Ward’s Joke Letter

This post has nothing to do with silent movies (these posts connecting Beaver to Long Beach and to Santa Monica do), but I’ve really been enjoying watching Leave it to Beaver on Netflix instant streaming.  When they showed this idyllic small town main street during a scene from “Beaver’s Fortune” (Season 3:Episode 10; first broadcast December 5, 1959), I had to hit the freeze frame to figure it out. 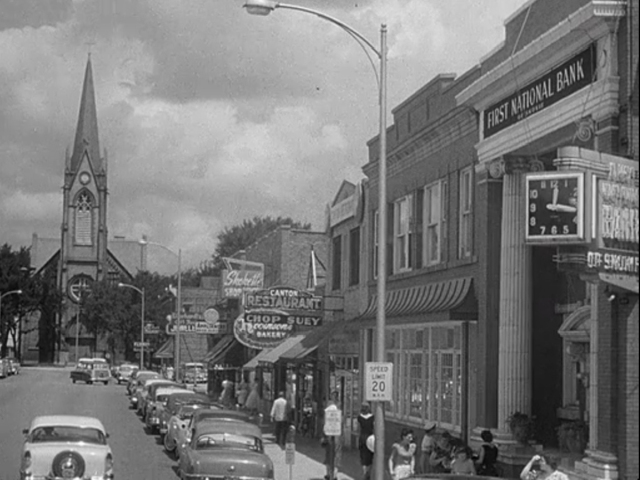 Leave it to Skokie

Although Beaver takes place in “Mayfield,” set in an undetermined state that must have “Springfield” (the rootless home town featured in The Simpsons) for its neighbor, it turns out Skokie, Illinois appears during this stock footage shot (no actors from the show appear in this scene).  The view looks north up Lincoln Avenue from Oakton Street towards St. Peter’s Catholic Church, originally built in 1894.

I was able to solve this easily enough, because even though Beaver was first broadcast over the airwaves in decidedly low-tech, low resolution, it was shot on 35mm “HD” film stock.  I sensed a word on the bank sign said “Skokie,” and was proven right.

It’s sad to see that the east side of Lincoln Avenue appearing during the scene has been replaced by a 1980s era bank plaza and related commercial buildings.  The west side of Lincoln, appearing off camera, is relatively unchanged.

Watching a prior episode “Her Idol” (Season 2: Episode 6; first broadcast November 6, 1958), I nearly fell out of my chair when I noticed I was able to read this letter sent home from Beaver’s grade school principal.  The person responsible for creating the prop letter obviously relied on the fact that the letter would appear only briefly on camera, in low resolution, without realizing that decades later technological advances would provide bored viewers such as myself the ability to scrutinize his handiwork.  The full text of this letter appears below. 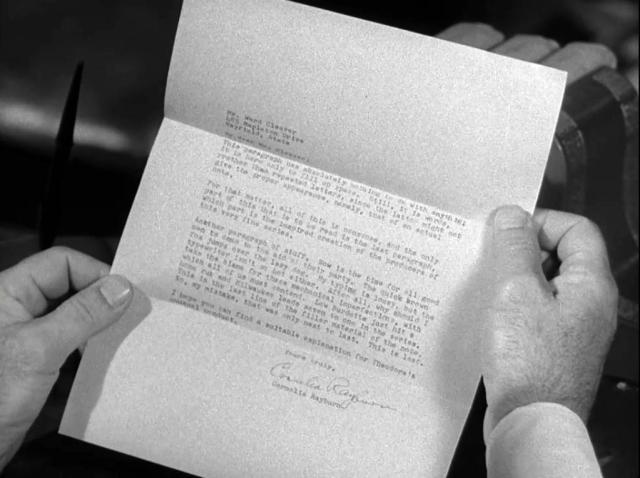 This paragraph has absolutely nothing to do with anything.  It is here merely to fill up space. Still, it is words, rather than repeated letters, since the latter might not give the proper appearance, namely, that of an actual note.

For that matter, all of this is nonsense, and the only part of this that is to be read is the last paragraph, which part is the inspired creation of the producers of this very fine series.

Another paragraph of stuff. Now is the time for all good men to come to the aid of their party. The quick brown fox jumps over the lazy dog. My typing is lousy, but the typewriter isn’t so hot either. After all, why should I take the blame for these mechanical imperfections, with which all of us must contend. Lew Burdette just hit a home run and Milwaukee leads seven to one in the series. This is the last line of the filler material of the note. No, my mistake, that was only the next to last. This is last.

I hope you can find a suitable explanation for Theodore’s unusual conduct. 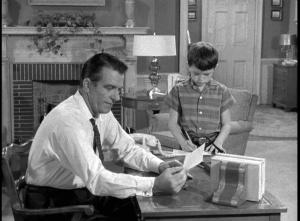 Well, after decoding this secret message, I felt pretty smug, but not being able to leave well enough alone, it crossed my mind to Google the text I had just deciphered, and low and behold, the Curious Case of the Beaver Letter had already been properly explored, long ago, at one of my favorite websites, Shorpy.com, “History in HD,” a site that posts fascinating high resolution vintage photographs.  It turns out the reference to Lew Burdette ties the letter to Game 2 of the World Series between the Yankees and the Braves, played October 2, 1958, about a month before the episode aired.  Here’s the link to the Shorpy treatment of Beaver’s letter.  It makes me wonder what other Easter eggs from early television lie waiting to be discovered.

This entry was posted in Leave It To Beaver, TV Shows and tagged Leave it to Beaver, Shorpy, Skokie. Bookmark the permalink.

16 Responses to Leave it to Skokie, and Beaver, and Ward’s Joke Letter