The Artist Locations – Part 7 – Uggie and Peppy Save the Day

Now that the multi-Oscar-winning Best Picture The Artist is available for study on home video, I can present more locations from the film, including the street sign mentioned in my first post (see left), visible when Uggie the dog summons a policeman to rescue his master George from a burning building.  The Uggie scenes were filmed at the corner of N. June Street and Oakwood near Hancock Park.  You can see all of my posts about The Artist HERE.

After capturing the cop’s attention, Uggie leads the cop down S. Hudson Avenue (see below), two blocks south of the Oakwood corner where they met, past the low brick retaining wall of 134 S. Hudson Ave.   My sixth post shows this scene being filmed.

Lindsay Blake’s television and movie location blog ImNotAStalker.Com has several posts with locations from The Artist; including George Valentin’s apartment; the history of the Red Studios where much of The Artist was filmed; and the AFI “hospital” and the Wilshire Ebell where many interior scenes were filmed.  Thanks to Lindsay for identifying this spot –  below, a panoramic view of George Valentin’s apartment on W 21st Street.

When Peppy Miller smashes her car into the tree standing before George’s apartment (left), you can see the driveway to 4061 West 21st Street across the way in the background.

Before arriving at George’s apartment, Peppy races around a narrow corner, going from north on Hudson Place to south on S. Hudson Avenue (below), the same street, above, where the cop follows Uggie beside 134 S. Hudson Avenue.  Another view from Peppy’s frantic drive to find George, at the corner of S. Hudson and W. 2nd Street, appears in my first post.

Peppy round the bend – looking south at the corner of Hudson Place (left) and S. Hudson Avenue (right)

This view to the left, looking north, shows Peppy driving south from the narrow corner shown above.  Beside her is the distinctive fence alongside 104. S. Hudson Avenue.  As shown in my prior post (and below), this same section of wall appears during scenes between Uggie and the cop.

As explained in my first post, standing between Peppy’s mansion (56 Fremont Place, once the home of Mary Pickford), and George’s mansion (104 Fremont Place, just half a block away from Peppy), is the mansion Charlie Chaplin used when filming The Kid in 1921 (55 Fremont Place).  All three homes are part of Fremont Place, a gated community, so it is not possible to post Google Street View images of these homes.

Click to enlarge.  Behind George, the front entrance to 101 Fremont Place

But with the Bing Maps Bird’s eye function, we can see the location of the mansions relative to one another.  At the left, as George leaves his home (the mansion located at 104 Fremont Place), we can see behind him, across the street, the entrance-way columns and pitched roof of 101 Fremont Place, matching the aerial view below.

To the left, and below, when Peppy races through the front gate of her mansion to rescue George, you can see the lawn of 55 Fremont Place across the street, the mansion appearing in Chaplin’s The Kid.

View from the gate of 56 Fremont Place towards the lawn of the mansion appearing in The Kid (inset above, right).  (C) 2012 Microsoft Corporation, Pictometry Bird’s Eye (C) 2012 Pictometry International Corp.

Wrapping it all up, this aerial view below, looking west, places the mansions into perspective. 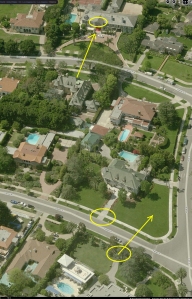 The top oval is 101 Fremont Place, across from George’s mansion.  The center oval is where Edna Purviance abandoned her newborn infant in front of 55 Fremont Place, in The Kid.  The bottom oval marks the entrance gate to 56 Fremont Place, Peppy’s home, that was once home to Mary Pickford.