Seven Chances is Buster Keaton’s latest Blu-ray release from Kino Lorber.  During the film Buster eludes an army of angry jilted brides as he attempts to marry his sweetheart in time to inherit a fortune.  After owning the film first on Laserdisc, and then again on DVD, for me this beautiful Blu-ray production definitely makes the third time the charm.

"I saw him first!" The late Mrs. Eleanor Keaton

I prepared a visual essay about the shooting locations as a bonus program for the release, and am very pleased with how it turned out.  Most of the program covers new locations not presented in my book Silent Echoes, including the Flint Mansion standing in for a country club early in the film, a duck hunting scene filmed at the Playa del Rey marshlands, and shots of Buster racing along Santa Monica Boulevard directly across the street from the Pickford-Fairbanks Studio.

One of the joys in working on my books was meeting Buster’s widow Eleanor Keaton.  I drove her around Los Angeles one afternoon towards the end of her life, and took her to the Seven Chances church.  She joked, as she posed on the steps, that whereas hundreds before her had failed, she was the one woman who had succeeded in marrying Buster. 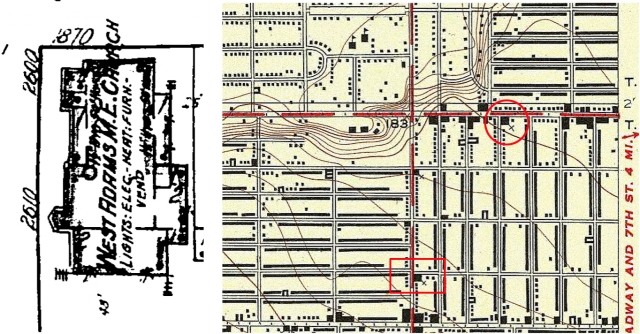 I used these maps siting in the library at UC Berkeley to solve the church's whereabouts. The box shows a non-candidate church, the circle shows the church appearing in the film.

Originally the West Adams Methodist Church, the church appearing in the film is now called the Greater Page Temple, at 2610 South La Salle Avenue.  I located the church in 1997 by noticing it stood on the SE corner of a “T” intersection.  Sitting in the UC Berkeley map library, I identified several candidates by searching vintage USGS topological maps for churches standing on the appropriate corner, and confirmed the correct one by comparing the Sanborn Fire Insurance Map of each candidate to the image in the film.  In an era preceding Google Street View, I had to wait several months for my next visit to Los Angeles before learning that the church is still standing.

As with each new Blu-ray release, the additional clarity and resolution leads to further discoveries.  One scene that had puzzled me shows Buster hitching a ride on the spare tire of a moving car, while passing a storefront with unusual features, including numerous archways, a narrow alley bisecting the buildings, and stairways leading down from the store doorways to the street.

On the Blu-ray I could now barely discern words that appeared to say “SWISS HAND LAUNDRY.”  A quick check with the online vintage City Directories hosted by the Los Angeles Public Library showed that the laundry was located at 4571 Melrose Avenue.  The unusual building still stands today, minus a couple of arches.

Buster collides with a trolley in front of the Bovard Auditorium and Administration Building at USC. The campus pedestrian mall used to be a busy street with an active trolley line.

Through the magic of film editing, immediately after Buster jumps aboard the car on Melrose, it crashes with a trolley in front of the Bovard Auditorium and Administration Building on the USC Campus, nearly eight miles away.