Posted on September 3, 2011 by John Bengtson

In Modern Times (1936) a policeman chases Charlie around the NE corner of Center Street (left) onto Jackson Street (right).

Charlie Chaplin and and film noir?  It’s also true.  As with my prior post about Harold Lloyd, Chaplin also has a connection to The Turning Point (1952), a noir crime drama where William Holden plays a cynical reporter investigating a corrupt cop.  And given how the great silent comedians often crossed paths, Harold make a cameo appearance here too.

In Modern Times (1936), factory worker Charlie tightens bolts on an ever-accelerating assembly line, eventually suffering a nervous breakdown.  After attempting to tighten the buttons on this matron’s dress (below left), he is carted off to a sanatorium (below right).  These scenes were filmed on Jackson Street beside the Southern California Gas Company gas manufacturing plant.

This view from Harold Lloyd’s feature For Heaven’s Sake (1926) also looks west down Jackson towards the same gas tank appearing in the Modern Times frames above. 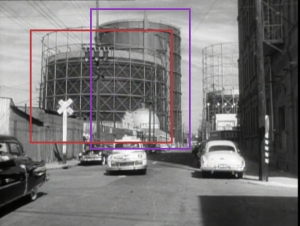 Looking north up Center Street, the red box marks the gas tank appearing in Modern Times above, while the purple box marks the tallest gas tank, on Ducommon Street and Center, appearing in The Kid, below.  The taxi is turning east on to Banning.

Before pipeline technology allowed for the importation of natural gas over long distances, these plants manufactured gas locally by burning coal, and storing the resulting gas in large holding tanks.  These tanks once stood east of City Hall.  At 378 feet, the tallest of the three tanks stood more than twice as tall as the 150 height restriction for downtown commercial buildings.

In The Turning Point, reporter William Holden arrives by taxi (at left) to pay a visit to the mob boss played by Ed Begley, who runs a trucking company.  The trucking company building stood at the NE corner of Center and Banning Streets.  The gas storage tanks appearing in the movie frame once stood on blocks to the NW, NE, and SW of the intersection of Center and Ducommun Streets.  The tallest of the three tanks (marked with a purple box) appears prominently during scenes from Chaplin’s early masterpiece The Kid (1921). 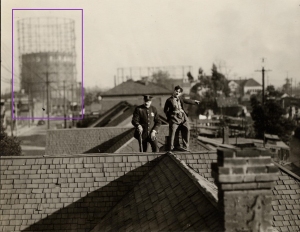 Looking east down Ducommon to the left, this view from The Kid shows the tallest gas storage tank (purple box) located on Center and Ducommon Streets.  The school at the right horizon appears below closer up.

Click to enlarge.  Looking east down (or near) Jackson Street, this production shot of a deleted scene from Harold Lloyd’s feature comedy For Heaven’s Sake shows the same three gas tanks.  The red box marks the tank appearing above in Modern Times and in The Turning Point.