Fans of The Office television show cheered when Michael Scott (Steve Carrell) and Holly Flax (Amy Ryan) finally rekindled their romance with a rooftop kiss at the conclusion of Episode 15, Season 7, entitled The Search.  During the show, an emergency forces Jim to leave Michael behind at a gas station restroom. When Michael emerges from the restroom, without money or his wallet, he wonders off aimlessly.  Searching for Michael, Dwight and Erin are stunned to realize that Holly’s quirky hunches and random fixations are actually leading them closer and closer to Michael’s whereabouts. When Holly decides she might spot Michael from atop a tall building, she climbs to the rooftop of the Mayfair Hotel, to find Michael waiting there for her.

While admittedly off-topic for a silent movie blog, the brief glimpse of a classic Beaux Art-style 1920s-era building during the episode immediately grabbed my attention.  I went through a mental list of possible matches in downtown Los Angeles, and then checked possible buildings in Hollywood, and Burbank, but they were all dead-ends.  A few months later, while searching online for a downtown hotel, the Mayfair Hotel popped up, and I immediately recognized it as the setting from the show.  The hotel is not part of the Los Angeles Historic Core, but located instead several blocks west at the SW corner of Hartford Avenue and W. 7th Street.

This brief view of the Mayfair appears during the show – at right, a view south down Witmer towards W. 7th Street.

The hotel was built during 1926, and celebrated its grand opening in early 1927.  Designed with 350 rooms, each with a private bath, the hotel was well-known for its nightclub Rainbow Isle.  There, guests could enjoy dancing on an all glass dance floor blazing with color and light, while listening to George Eckhardts Jr. lead the Rainbow Isle orchestra, broadcasting nightly from 10 to 11 over KFWB radio.  Remember folks, “at the end of the rainbow there’s happiness.”

Noted author Raymond Chandler, famous for creations such as L.A. private detective Philip Marlowe, reportedly stayed and drank at the Mayfair on occasion.  His short story I’ll Be Waiting, published in the October 14, 1939 edition of the Saturday Evening Post, is said to take place at the Mayfair, although given the fictionalized name Windermere in the story.

Once I had discovered the Mayfair, I became intrigued by other settings from the same episode. Noticing the 14546 address during Michael and Jim’s sales call, I Googled “14546 office burbank” and the first hit was an office for rent in Van Nuys that matched the site.

At the beginning of the episode, Michael and Jim pay a sales call at 14546 Hamlin Street, Van Nuys

From then on it was like eating peanuts.  I couldn’t stop after just one, and with a few more Google and Bing searches I had soon lined up the entire episode. 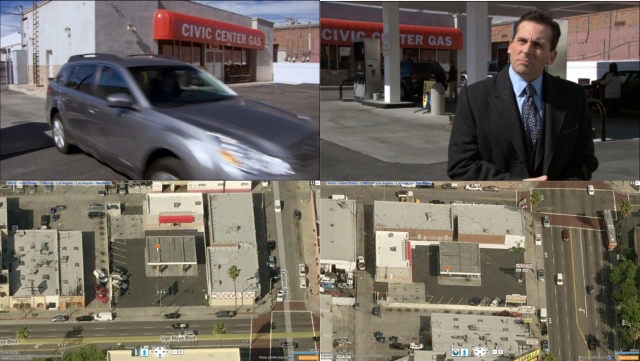 Erin, Dwight, and Holly ponder where Michael could be – the NW corner of Ingraham and Witmer Streets

The apartment behind Dwight, Erin, and Holly also served as the apartment for JD and Turk in the long-running medical sit-com Scrubs – Season 2, Eps. 14 My Brother, My Keeper.

Holly leaves Dwight and Erin – at back, the SW corner of Ingraham and Witmer

Holly walks down Witmer towards 7th Street and the Mayfair Hotel

This Google Map identifies all of the locations appearing during the episode.   I learned of the location of The Office office, and of Mr. Choo’s, from Lindsay Blake’s I’m Not a Stalker movie location website.

This entry was posted in The Office, TV Shows and tagged Holly Flax, Mayfair Hotel, Michael Scott, The Office, The Office locations. Bookmark the permalink.

6 Responses to Michael Scott (?!) and the Mayfair Hotel – admittedly OT