During Seven Chances (1925) Buster’s character discovers on his 27th birthday he must marry by seven o’clock that evening in order to inherit a $7M fortune. After ineptly proposing to his longtime girlfriend, he speeds off to a country club where he fails proposing to seven women acquaintances (his seven chances).

The club was in fact the mansion of larger-than-life Frank P. Flint, a deputy marshal, judge, business tycoon, one-term United States Senator (appointed, not elected), and founder of the town La Canada Flintridge, modestly named after himself. Senator Flint was quite a character, a well-known philanthropist, who delighted being dubbed “The Santa Claus of Los Angeles,” and well-known philanderer, who survived being shot at by one lover’s jealous husband.

Above, Buster poses at the Flint mansion sloping front lawn, and again with co-stars Snitz Edwards and T. Roy Barnes. The central Seven Chances photo reveals only seven fingernails – Buster lost the tip of his right index finger in a childhood accident.

Above, Buster and Roy chase Snitz from the front corner balustrade down the long, curving driveway. To learn more about the fascinating history of Flint and his eponymous town, check out the Lanterman House Spring 2021 PDF newsletter. Lanterman Historical Museum Foundation.

Now, the NO LONGER lost, now found part, of this lost and found post.

Rejected by his girl, portrayed by Ruth Dwyer, Buster leaves her home and then arrives at the club, presented onscreen with this stunning lap-dissolve transition. While this digital effect is now commonplace, Keaton had the foresight to envision it a century ago, and the skill to create it the old-fashioned way, by re-exposing the same film within the same camera, and using surveying equipment to assure the car was aligned in exactly the same position for both shots. 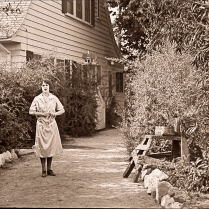 This post sought reader’s help to identify the home, and Tim Day, and “v.sonia.v,” both quickly solved the puzzle. The home still stands at 1625 Opechee Way in Glendale. Here are the original clues, and my plea for help. Skip further to find the solution. Ruth’s home appears to be genuine, with an authentic-looking “1625” street address. Fully lit by the sun, the home appears to face to the south, and has a sloping hill in the (north?) background.

This panning shot shows the 1625 home situated on a developed street, lined with corners, curbs, sidewalks, lampposts, and landscaping. Aside from the sloped hill at back, and the other clues, presumably this home was relatively near La Canada Flintridge, as Buster and crew had to travel between the home and the “club” to capture the lap-dissolve shots. 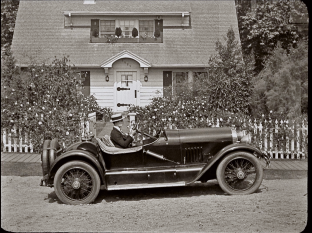 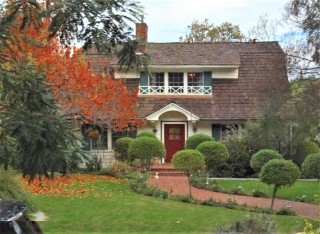 Hooray for crowd-sourcing. Here’s a COMPASS listing for the home. While Tim was posting his solution in the comments below, my friend Kim Cooper wrote that “v.sonia.v” had posted the same solution on Kim’s Esotouric Instgram account. Given the time stamps, v.sonia.v could not have read Tim’s account, so we owe them both full credit for their independently rapid solutions. Cheers to all – thank you.

Other posts on this site report “new” Seven Chances locations beyond those covered in my Keaton book Silent Echoes. Someday I will post how Buster dodges a duck hunter at the Playa del Rey marshlands, and how Buster raced along Santa Monica Boulevard directly across the street from the Pickford-Fairbanks Studio. A recent favorite post, Buster was conked on the head by a tossed alarm clock beside the apartment located at 5987 Franklin, at the NE corner of Cheremoya – see full post HERE. My YouTube video Buster Keaton Filming at USC also contains several Seven Chances scenes.

It appears Buster and crew had to drive about 4.6 miles between the two sites, a mere 11 minute drive.