Chaplin – Inside “The Kid” Maternity Hospital

In a prior post, How Charlie Chaplin Filmed The Kid, I explain that the former Occidental College Hall of Letters building, once visited by Presidents Taft and Teddy Roosevelt, portrays the Dickensian maternity hospital where single mother

Edna Purviance is cast into the cold, cruel world. Astonishingly this building, trimmed of its upper floor and roof, is still standing, now a modest apartment block in Highland Park. (The original campus building was abandoned when the new, larger Occidental campus opened in nearby Eagle Rock in 1914).

Chaplin scholar Brad Alexander (who is researching the connections between Chaplin and Albert Einstein) visited the site recently, and sent me some remarkable photos from both outside and inside the building. (Having discovered this spot using the Internet, and living in the Bay Area, I have yet to visit the site in person).

Click to enlarge- the east entrance appearing in the film. Brad Alexander. 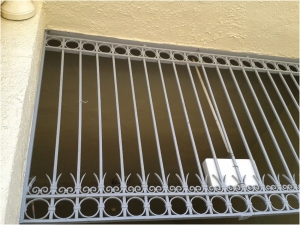 Now that The Kid is released on Blu-ray, I continue to be amazed at the striking details apparent in the film. If you click the above then and now image, you can clearly see the interior steps leading down from the main hallway that Edna strode as she departed the building. The stairs are still there, and now you can see them in the movie too. At the left you can see that the upper grill details that once stood above the gate still remain.

Click to enlarge – three sets of interior doors along the hallway can be seen. Brad reports that the nurse was portrayed by Chaplin’s personal secretary Nellie Bly Baker.

Thanks to Brad’s visit, and the Blu-ray detail, I also now understand the interior layout of the hall. There were three sets of doors. First, an interior pair of glass entrance doors stood just up the stairs from the gate, the reflecting left glass door is closed (see vertical line above). Next, a pair of doors further into the building closed off a section of the hallway (see horizontal line above). All the way down the hall, just above the CHARITY sign, you can see part of the glass entrance doors on the other side of the building. Note that the elegant marble balustrade (see box above) is no longer present. 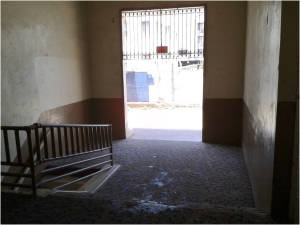 This view (left) matches Edna’s view as she walked down the stairs to the entrance gate. The glass doors at the top of these stairs are no longer in place. Notice that the carved marble balustrade that once stood to the left has been replaced with metal railings.

From the same spot, where the glass entrance doors once stood, this view (below, right) looks in the other direction, west from the top of the stairs, towards the

deep interior doorway that can close off a section of the hallway. This doorway is highlighted with the blue horizontal line in the detailed view of Edna above.

This view (below left), looks east, from inside the other entrance of the building, down the length of the hallway towards Edna’s exit at the far end of the hall.

Matching views of the east side of the building.

The south side of the building, where Presidents Taft and Roosevelt once spoke (see below).

I wonder if the people living here have any idea that two Presidents of the United States, and Charlie Chaplin, all once came here to visit. You can read all about how Charlie filmed The Kid in my Chaplin book Silent Traces. I want to thank once again Brad Alexander for sharing these photos. I would also like to thank my friend Jeffrey Castel De Oro for taking all of the photos of this building originally appearing in my book. 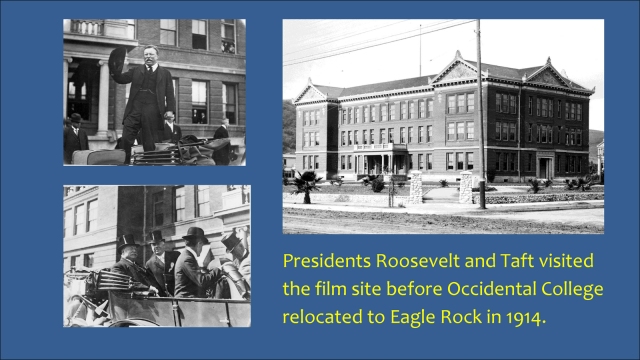 At left, and below, the west entrance to the building (the side not appearing in the movie), partially blocked from view, is reached by walking between the row of bungalows at 121 N. Avenue 50, in Highland Park.

10 Responses to Chaplin – Inside “The Kid” Maternity Hospital