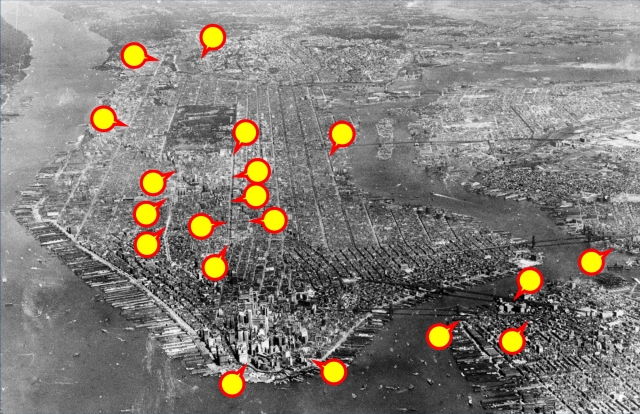 While most “New York” based films contain only a few stock footage establishing shots, Lloyd filmed ALL OVER – from Hamilton Heights north, to the tip of Bowling Green south, as well as in the Bronx, Brooklyn, and Coney Island.

Lou Gehrig has a cameo DURING Babe Ruth’s cameo.  You can read more about Gehrig’s appearance HERE.

Throughout the film Speedy cuts back and forth between scenes shot in New York and Los Angeles.  This view looks south down Witmer in Los Angeles towards the Mayfair Hotel.  This hotel appears in the 1950 film noir Edge of Doom and in the television series The Office.  (C) 2011 Google.

Lloyd built a huge New York backlot (box) near Westwood Village (at back). The lot stood not far from the Westwood Village Memorial Park (dark vegetation left of center), where many notables, including Marilyn Monroe, are buried. A middle school and a large Mormon temple were built on the backlot site.

I’ve posted many other stories about Speedy (see the list HERE), and cover it thoroughly in my Harold Lloyd film locations book Silent Visions.  Here’s also a link to an online article I prepared for the Museum of the Moving Image in New York when I spoke there in 2011.  I’ll be available all this weekend to sign books at the festival. 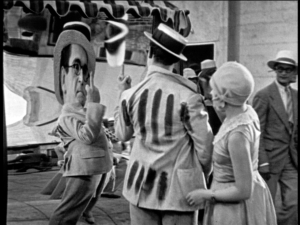 In closing, here’s something you don’t see every day – Harold extending the “digitus impudicus.”