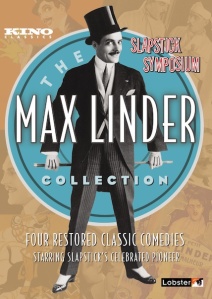 Dapper Max Linder, the pioneering French silent film comedian affectionately dubbed “The Professor” by Charlie Chaplin, will be taking the spotlight soon. Max’s 1921 feature comedy Seven Years Bad Luck will be screened at the San Francisco Silent Film Festival, and will be released by Kino-Lorber on video along with three other Linder films as part of The Max Linder Collection. Preservationist and

entertainer Serge Bromberg, the founder of Lobster Films (the company responsible for restoring these films), will be presenting Seven Years Bad Luck at the festival on June 1 at 10:00 a.m.  The previous day, on May 31 at noon, Bromberg will screen a host of film treasures, including the recently discovered “lost” version of  Buster Keaton’s The Blacksmith, as featured here in my three-part series of posts.

Although born in France, Linder moved to the United States in 1918, and was soon filming across Los Angeles and Hollywood at the same spots favored by his American contemporaries.  Below, Max races north up Cahuenga across Hollywood Boulevard.

Looking toward the SE corner of Cahuenga and Hollywood Boulevard. Max (red oval) races up Cahuenga while the yellow oval marks where Buster Keaton grabbed a passing car one-handed in Cops (1922).

The intersection of Cahuenga and Hollywood Boulevard, depicted in Max’s movie, upper left, above, has appeared in dozens of films and in several of my prior posts, including this one about Mary Pickford HERE.

Lost to the Santa Monica freeway, this home once stood at 15 Berkeley Square.  Comedy producer Hal Roach lived on the same gated block at No. 22.

Ollie and Stan in Berth Marks (left) – Max at right.  The same Western Union sign (oval) appears in each shot.

Below, a view of Max at the front of the former  Santa Fe depot.

There are many more locations to report, but I’ll close with a connection between Max and the D.W. Griffith 1916 masterpiece Intolerance.  Both movies include scenes filmed on Buena Vista Street beside the former L.A. County Jail. 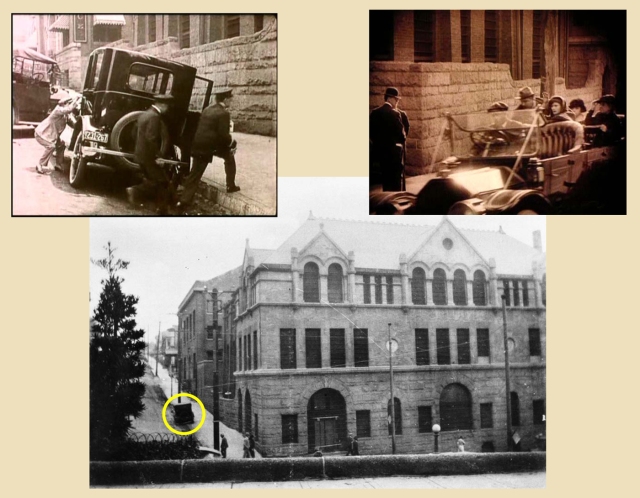 Click to enlarge. Max hides behind a car in Seven Years Bad Luck (upper left) – the Dear One desperately races to halt the execution of an innocent man in Intolerance (upper right).  The car in both movie images is pointed the same direction east up Buena Vista Street, standing near the oval in the photo, by the side of the L.A. County Jail fronting Temple Street.