Click to enlarge.  This later aerial view shows the block of Hope Street where Lloyd filmed. USC Digital Library EXM-P-S-LOS-ANG-CIT-AIR-VIE-019.  Each building can be viewed up close (see below).

Lloyd filmed along the block of Hope Street (above) between Temple Street to the left, and Court Street to the right.  Each building in the above aerial view can be viewed individually at the Los Angeles Public Library Homes of N. Hope St collection, including to the left of

Later in Take A Chance Harold chases Snub Pollard and Bebe Daniels past the Chestmere Apartments that stood on Court and Grand, just two short blocks from the Bradbury Mansion that served as the studio home for Lloyd and producer Hal Roach.  The mansion stood on the corner of Hill and Court Streets, with the main entrance facing Hill. 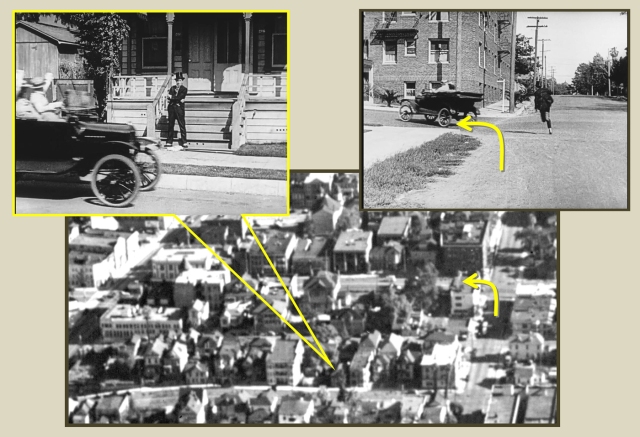 The Chestmere Apartments also appears in reverse view behind Harold in this scene (right) from one of his earliest surviving movies, Lonesome Luke Messenger (1917).  The view looks north up Court Street – Lloyd’s Bradbury Mansion studio stands to the left, just out of view.  Lloyd is running down Court St from the corner of Olive St.  The row of homes on Court St across from the mansion, off camera to the right, appear in many early Lloyd comedies.

Click to enlarge.  This 1919 aerial view looking south situates the Bradbury Mansion (3 – viewed from Hill St) and the Chestmere Apartments (4). The south overlook of the Hill Street Tunnel (2) is where Lloyd and many other comedians built sets to film stunt comedies. The movie frame oval (4) shows the tower of the former Hall of Records (1) on Broadway, below the base of Court Hill. Street index – (B) Broadway, (H) Hill Street, (O) Olive Street, (G) Grand Avenue. Watson Family Photographic Archive

This 1919 aerial view above shows the Court Hill filming location in relation to local landmarks, such as the Hill Street Tunnel overlook, where many stunt comedies were filmed, and Lloyd’s Bradbury Mansion studio.  You can read a detailed account of this aerial photo, showing how stunt comedies were filmed, in this post LA’s early hills and tunnels preserved in comedies and film noir.

Also from Take A Chance, Harold in front of the Majestic Apartments at 406 W. Temple

Take A Chance begins with Harold flipping his last dime to decide whether to spend it eating or getting a hair cut.  Instead he loses it down a storm drain.  This scene was filmed in front of the Majestic Apartments on Temple St., also just steps away from the Bradbury Mansion.  In this post I explain how the Majestic and the Hill Street Tunnel appear in the 1949 Burt Lancaster noir classic Criss Cross.  You can see the relation of the Majestic to the other Take A Chance filming locations in the view below.

Click to enlarge.  The Take A Chance filming locations; Hope Street (1), the Chestmere Apts on Court St (2), and the Majestic Apts on Temple St (4).  The Bradbury Mansion filming studio, and twin bore Hill St Tunnel, appear in the box and matching Map (3) by Piet Schreuders.  Street index – (G) Grand Avenue, (O) Olive Street, (H) Hill Street, (B) Broadway.  Nothing of this setting, aside from the street names, remains today.

Take A Chance concludes with an escaped prisoner knocking Harold unconscious, and swapping their  clothes.  Unaware of his new appearance, Lloyd ignores these two policemen, who drag him off to jail.  The setting was the true Los Angeles city jail, that appears in many early comedies, including Laurel and Hardy’s The Hoose-Gow (1928).  You can read more about the jail in this post Laurel-and-Hardy-Charlie-Chaplin-four-silent-jailbreaks.