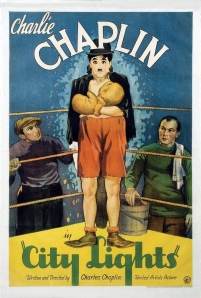 The scenes where Charlie reports to work as a street sweeper, and where he also learns there is money to be made in the boxing ring, were filmed on the Chaplin Studio backlot beside the open parking stalls of the studio garage.

I knew that these scenes had to have been filmed at the studio, but for years my false assumption that they were filmed looking north prevented the geometry from falling into place to reveal the location.  Once I “thought outside the box” long enough to question whether the scenes might have been filmed looking east instead of north, I immediately solved the puzzle.

Click to enlarge – looking west across the Chaplin Studio backlot.  The arrow (pointing east) marks the studio garage, used as the street sweeper work station in City Lights.  The French village set (dotted line) appears in A Woman of Paris.

While there is scant photographic record of the non-glamorous motor-pool corner of Chaplin’s backlot, the studio garage appears to the left in this panoramic image above, taken in 1923, looking west across the lot towards the entrance gate on La Brea, and the French village set constructed for Chaplin’s dramatic feature A Woman of Paris. 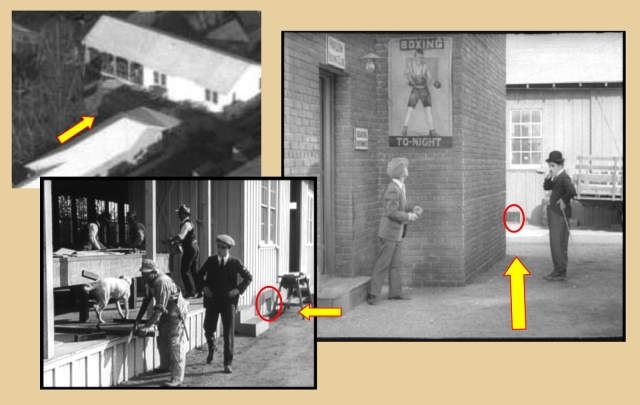 Click to enlarge – the arrow points east towards the Chaplin Studio carpenter shop.  The boxing gym is a very simplistic corner set.

As shown above, the Chaplin Studio carpenter shop appears in the background of the scenes from City Lights.  The close-up view of the shop, lower left above, comes from How to Make Movies (1918), the documentary footage Chaplin shot of his studio that he had hoped to submit to his distributor First National as a theatrical release in lieu of an actual comedy.  The carpenter shop still stands in place on the lot today. 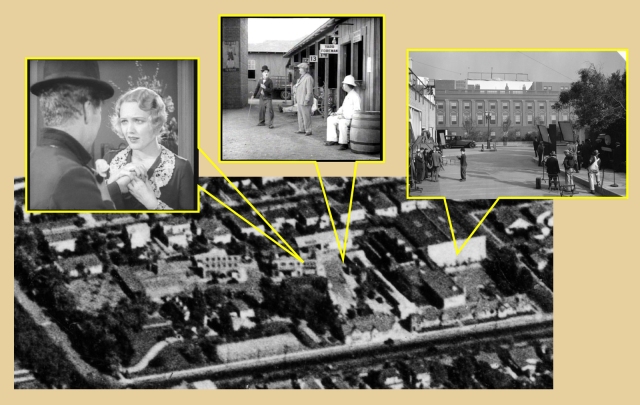 The above aerial view, looking east at the Chaplin Studio located at 1416 N. La Brea, shows from left to right (i) the site of the flower shop set on the backlot, where the emotionally charged final scene was filmed, (ii) the location of the studio garage, and (iii) the open air stage where Chaplin filmed the Little Tramp’s first encounter with the blind Flower Girl. 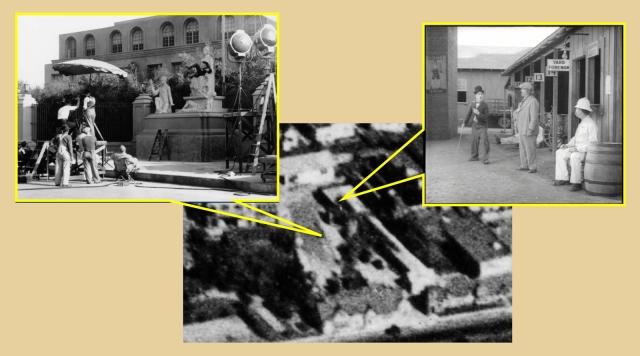 Click to enlarge – the sweeper set stood behind the statues set

An even closer look (above) reveals that the sweeper work station set stood immediately behind the civic park statues set.

The above circa 1928 view of the Chaplin Studio, looking to the NE, shows that Chaplin had already painted the large civic backdrop mural that appears during the scene where the Little Tramp meets the Flower Girl.  It is clear from the above photo that by 1928 Chaplin had yet to build the elaborate city street backlot set (right) that appears so frequently during the film.  Chaplin would use this backlot set again extensively in Modern Times (1936) and The Great Dictator (1940).

As mentioned, I would have found the above street sweeper work station scenes from City Lights much sooner if I had not mistakenly assumed the shots were filmed looking north.  But identifying non-obvious movie locations requires making such basic assumptions regarding the position of the camera.  For example, I was able to solve the location of the church from Buster Keaton’s 1925 feature Seven Chances (left) only by first correctly assuming the camera view looked north.  In turn, this meant that the church stood on the SE corner of a “T” intersection, which proved to be the unique key to solving the mystery.

It’s easy to get tripped up identifying spots assuming east is always east and west is always west.  There is no film-makers’ oath requiring cinematic landscapes filmed on location to comport with reality.  Movies frequently match scenes filmed miles apart, or traveling in opposite directions.  So both in life, and in silent movie location identification (you know, the important things) ;-), it always pays not to assume too much and to keep an open mind – you never know what you might find.

You can read all about how Chaplin filmed City Lights in my book Silent Traces.  There’s also a fun City Lights post about the Little Tramp finding a cigar butt beside the Beverly Wilshire Hotel HERE.

Seven Chances licensed by Douris UK, Ltd. All images from Chaplin films made from 1918 onwards, copyright © Roy Export Company Establishment. CHARLES CHAPLIN, CHAPLIN, and the LITTLE TRAMP, photographs from and the names of Mr. Chaplin’s films are trademarks and/or service marks of Bubbles Incorporated SA and/or Roy Export Company Establishment. Used with permission.