A panoramic view of the Modena Apartments, at 661 Shatto Place, formed by images from Harold Lloyd’s For Heaven’s Sake (1926) and the opening credits to the Punky Brewster premiere episode (1984).

In a prior post I explain how the same setting on Witmer Street appears in a Harold Lloyd silent comedy, a 1950 film noir classic, and in the recent sitcom The Office.  Another post shows how early Buster Keaton comedies share settings with the popular police procedural television show Bones, while another post matches Charlie Chaplin’s The Great Dictator with Parks and Recreation.  Given that location filming has been taking place in Los Angeles now for over 100 years, it makes sense that certain neighborhoods have layers of cinematic history waiting to be discovered.

Actor George Gaynes portrays a photographer.  In the credits he leaves a real photo shop, the Haines Photo Studio once located at 651 Shatto Place.  You can make out the true 383-1473 phone number against the “555” number added to the window.

This post was prompted by a ping-back from Lindsay Blake’s I Am Not A Stalker.com pop culture locations website, reporting that the Trebor Apartments at 2520 W 7th Street portrayed the apartment home of Punky Brewster in the 1980s NBC sitcom.  Although the show, starring Soleil Moon Frye as Punky, “takes place” in Chicago, the premiere episode opening credits were likely filmed entirely in Los Angeles, despite an unsubtle shot of some Illinois license plates in a parking lot.  Lindsay linked her post to mine because I had previously reported that this same apartment appears in the 1926 Harry Langdon feature comedy The Strong Man.  Below you can see matching images of the Trebor Apartments from 1926 and 1984.

Click to enlarge.  The Trebor Apartments (lettering barely visible above the door, left) appearing in The Strong Man and in the 80’s sitcom Punky Brewster.

During the show’s opening credits, actor George Gaynes locks up his photo shop once located at 651 Shatto Place (see above), and strolls past 1920’s era apartments located on the same block.  The shot at the very top of this post of Punky was also filmed on this block.  [Note: Lindsay recently visited Shatto Place, and has posted some great “today” photos of the following locations.]

The Pierre Crest Apartments at 673 Shatto, appearing in the show’s opening credits, and in For Heaven’s Sake.  The box marks the same fire hose coupling.

Below, George continues his stroll south down Shatto Place past an actor playing a homeless man sitting beside the York Apartments.

The commercial building that once housed George’s photo shop stood at the SW corner of Shatto Place and Wilshire Boulevard.  Below, a wider view of George’s shop from the opening credits, and a vintage view showing the storefronts along Shatto.

Click to enlarge.  The red box marks the same side entryway to the commercial building.  The women are strolling south past George’s shop, once located at 651 Shatto Place.

As I will report in another post, Harry Langdon filmed many scenes from The Strong Man along Wilshire Boulevard between Shatto Place and Vermont, around the corner from where Harold Lloyd filmed. 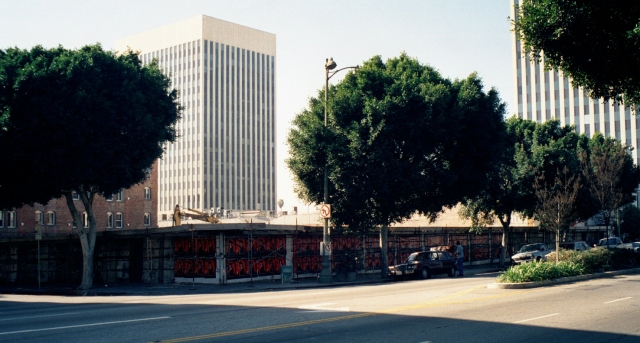 2002 – the Shatto Place commercial building was demolished a few weeks before I visited the site.  George’s photo shop was located at the far left edge of this photo.  A 20+ story tower nearing completion now stands at this site.

Harold Lloyd filmed an extended scene walking north up Shatto Place for his 1926 comedy For Heaven’s Sake.  In the sequence, Harold’s character discovers a misleading newspaper story has been printed about him, and attempts to purchase and discard all of a newsboy’s copies of the paper.

This view below from For Heaven’s Sake looks south down the street towards the York Apartments mentioned above, and the duplex at 3040 W. 7th Street at the end of the block.

The duplex at 3040 W. 7th Street still stands at the end of the block.

The apartments along Shatto Place were all built in 1922 and 1923, so it was a modern and fashionable neighborhood when Harold filmed there in 1926.  In fact, in 1926 the storefront at the corner of Shatto Place and Wilshire was a Rolls Royce dealership!

Robby Cress runs a classic movie location blog, Dear Old Hollywood, that features a couple of location posts about the 1978 Richard Dreyfus comedy-detective thriller The Big Fix.  Robby writes that the former Rolls Royce dealership later portrayed a storefront campaign headquarters in the Dreyfus film.   Below is a frame grab from Robby’s post.

Richard Dreyfus, Susan Anspach, and John Lithgow in The Big Fix.  The red box stands to the right of the camera shop doorway at 651 Shatto Place, matching the images further above.  Dear Old Hollywood 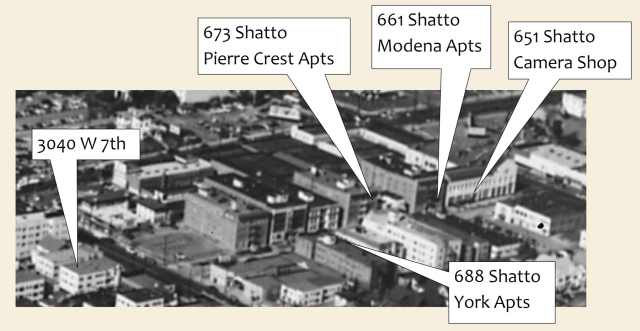 Looking to the NW at the block of Shatto Place between W. 7th (left) and Wilshire (right). 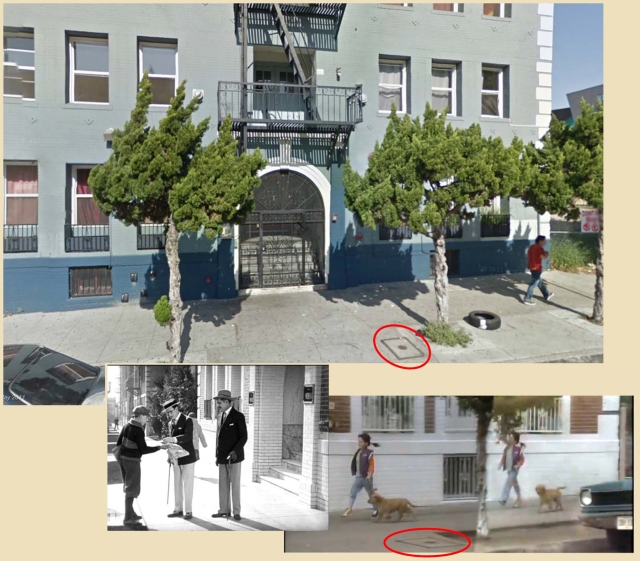 You can learn all about how Harold Lloyd filmed For Heaven’s Sake in my book Silent Visions.  You can watch the opening credits to the Punky Brewster premiere episode below.

Below, the Modena Apartments at 661 Shatto Place.