Wings, a 1927 World War I fighter pilot movie, was the first production to win the Academy Award for Best Picture.  To capture realistic point of view shots of the actors engaged in aerial dog fights, the two leads Charles “Buddy” Rogers and Richard Arlen actually piloted their own bi-planes, with motorized cameras affixed to the cockpit recording their faces and the action and swooping landscapes behind them.  The movie’s thrilling aerial cinematography will never be surpassed because it was all staged for real.  Most of the movie was filmed on location at Kelly Field in San Antonio, Texas. 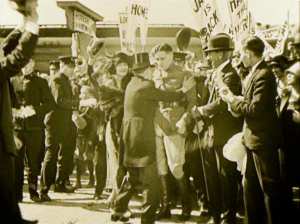 Continuing with posts concerning Southern Pacific depots appearing in silent film (see HERE and HERE), a concluding scene from Wings was filmed at the SP depot in Glendale, now called the Glendale Amtrak train station, the same station Buster Keaton used the same year when filming his campus comedy College (1927) and also appearing in the film noir classic Act of Violence (1948) (see both below).  Towards the end of Wings Buddy Rogers’s character returns home from the war, and receives a hero’s welcome at his local train station.  Although very little of the station appears on camera, several clues confirm the site.  Since Buddy’s white picket-fence home-town was implied to be set in “middle America” (i.e., not in Southern California), I have to infer that the elaborate Spanish baroque-style building was deliberately kept off camera to avoid breaking the illusion.

Click to enlarge and compare the signs – you can see the letter “G” outlined in white in both images.  They attempted to cover up the Glendale sign with a “welcome ” sign when filming.  USC Digital Archive.

Click to enlarge – a closer view of the matching windows

The remainder of this post is a re-post of Buster Keaton’s brush with film noir (see Harold Lloyd’s prior noir posts HERE, HERE, and HERE, and Charlie Chaplin’s noir post HERE), when filming College at the back, rather than the front of, the same Glendale station appearing in Wings.

The station is now the Glendale Amtrak Station.

The Glendale Southern Pacific station was barely three years old when Buster Keaton used it to portray the station for Clayton, the fictitious college town where Buster’s character pursues higher learning in the 1927 comedy College. Above to the right, the station was also the setting for the climax to Act of Violence, a 1948 noir drama starring Van Heflin and Robert Ryan, who portray re-united army veterans who were once imprisoned together in a German POW camp during WWII.  Act of Violence contains several scenes filmed on Court Hill, near the Hill Street Tunnel, and on Bunker Hill, near Angels Flight.  Unfortunately, these nighttime scenes are darkly lit, and tightly framed, so there is not much to see.

Act of Violence does contain a nice view of Clay Street, the narrow alley running between and parallel to Hill Street and Olive Street, and underneath the mid-way point of the Angels Flight elevated tracks.  As shown below, Harold Lloyd filmed a runaway bus stunt on Clay Street for his 1926 comedy feature For Heaven’s Sake.

Earlier during Act of Violence, Van Heflin runs south down Clay Street towards Angels Flight.   The same Clay Street setting appears during the wild double-decker bus chase in Harold Lloyd’s 1926 comedy For Heaven’s Sake, above left.  The same area of Clay Street is marked with a yellow box in each image.

Harold Lloyd filmed many other movies on Bunker Hill, and I will explore more Lloyd/noir connections in further posts.

As Lindsay Blake proves in her wonderful I’m Not a Stalker film and TV location blog, the noir classic Double Indemnity (1944), starring Barbara Stanwyck and Fred MacMurray was NOT filmed at the Glendale station, but actually the Burbank station, even though a “GLENDALE” sign appears during the scenes in the movie.   Instead, for some reason they put a “GLENDALE” sign on the Burbank station for the shot.  You can read about this and several other movies filmed at the Glendale station in Lindsay’s post HERE.

2 Responses to Keaton – Wings – Noir – and the SP Depot