A short segment from the Locations and Effects 2013 documentary with Academy-Award winning effects supervisor Craig Barron and the author filmed for the Criterion Collection release of the Safety Last! Blu-ray appears below.

The great silent stars filmed far more on this one block than at any other spot in town. This brief overview tour includes Normand, Pickford, Chaplin, Keaton, Lloyd, and the Hollywood Heritage celebration of the Chaplin-Keaton-Lloyd Alley.

Tour silent-era Hollywood with this PDF guide listing over 50 locations around town. The tour takes you to several spots right in Hollywood, as well as the sites for the Lloyd, Chaplin, and Keaton Studios.

In conjunction with my presentation of Speedy on October 16, 2011 at the Museum of the Moving Image, 36 01 35th Ave., Astoria, NY, at 3:00 pm, this tour shows the Brooklyn locations appearing during the film.  Of course the Coney Island sequences from the movie were also filmed in Brooklyn, but I cover that as an entirely separate chapter in my Lloyd book Silent Visions.

Manhattan viewed from Kent and 8th in Brooklyn

Freelance UK film journalist Jonathan Melville arranged for me to give him an impromptu tour of Hollywood Boulevard and Cahuenga, a street where Buster Keaton, Harold Lloyd, and Charlie Chaplin all filmed scenes.  Here is what Jon put together, as posted on YouTube. 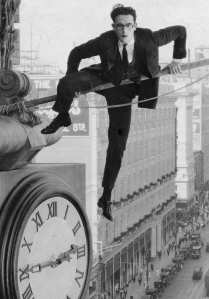 Lloyd on a set built atop the extant building at 908 S. Broadway, with the extant Hamburger’s (May Co.) Building at the SW corner of 8th and Broadway to the rear.

In conjunction with the Los Angeles Conservancy “Last Remaining Seats” screening of Safety Last! on June 25 at the Orpheum Theatre, I am posting here a self-guided walking tour of the downtown Los Angeles locations Harold Lloyd used in his 1923 silent classic, along with locations from Lloyd’s climbing stunts in Never Weaken (1921) and Feet First (1930), and behind the scenes images showing how Lloyd staged his famous skyscraper-climbing sequences.

In one way or another Lloyd employed 17 downtown buildings during his “thrill” comedies – see PDF list of descriptions here.