I am the author of a series of books about Charlie Chaplin, Buster Keaton, and Harold Lloyd, entitled Silent Traces, Silent Echoes, and Silent Visions, respectively, examining the locations and history hidden in the background of their classic films, and the changes wrought by the ensuing decades. I have also lectured at over sixty events and festivals across the country, while contributing visual essays to over a dozen DVD/Blu-ray bonus programs.

This blog supplements my books with tours, videos, and PowerPoint lectures that can’t be replicated in books, and new discoveries, and expanded coverage of the great silent clowns and their home turf, that would not otherwise be published.  Look for discoveries concerning Harry Langdon, Charley Chase, and other silent stars as well.  I welcome your questions and suggestions, and invite you to step back in time with me to explore silent-era Hollywood as seen through the eyes of its greatest comedians.

I first read Rudi Blesh’s biography Keaton in junior high, and was immediately hooked by Buster’s magic and the romance of early film-making.  I grew up watching silent comedies on public television, and collecting 8mm prints of Charlie Chaplin and Laurel & Hardy from Blackhawk Films.  I was fascinated by the world inhabited by the great silent-era comedians.  Although they walked beside real buildings, and drove on public streets, their world seemed as alien and remote as if from another planet – silent, colorless, beyond reach.

I knew this world was once real, but the only tangible sense I had of it was from this image in Blesh’s book.  A photo of Buster, his family, and friends, taken in 1920, looking proudly at the modest front office bungalow of the newly christened Buster Keaton Studio. 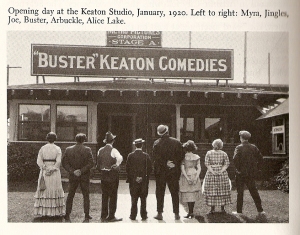 The photo was tantalizing.  I knew Buster walked up those front porch steps into his studio every day for eight years, but there was so little to see, so little explained.  Without any context, the photo was completely inaccessible.  It seemed there was only so much we would ever know about how Buster made his movies.

Things began to change in 1995, the centenary of Keaton’s birth.  Kino released Buster’s complete oeuvre on video for the first time, and later on, the Keaton appreciation society, the Damfinos, published an aerial photo of the Keaton Studio (center of bottom edge, below).  Viewing that aerial photo was a thrill.  It provided the context missing from the Blesh photo, and allowed me to “peek” over the studio fence for the first time.

For some reason, I began to notice certain bungalows and other landmarks from the aerial view began popping up in Buster’s films.  I also noticed a chase sequence from Day Dreams (1922) was filmed in San Francisco, near where I once lived.  Armed with photographs of the movie taken off of my television set, I visited San Francisco and identified every Day Dreams location filmed there in just a couple of hours.  Encouraged, on my next visit to Los Angeles I spent an hour looking up business addresses at the public library, and found several more locations in an afternoon.

I never set out to be an author, but from that point on things began to snowball.  Clues discerned from one film allowed me to solve locations from another film.  I met people who were experts about vintage movie ranches or beach-side amusement parks.  Image archives began posting searchable historic Los Angeles photos online.  Increasing numbers of silent comedies were released on DVD.  Like the tiles of a mosaic, with each individual discovery a broader and more detailed view of silent-era Los Angeles began to emerge.

Now, more than twenty years later, I have authored a series of books about the three great geniuses of silent comedy, and the historic environs where they once filmed, and continue making further discoveries today.  We know now the paths of Chaplin, Keaton, and Lloyd intersected frequently when filming, and yet they each had their individual favorite places to shoot.  We can appreciate how Keaton, and especially Lloyd, crafted elaborate chase sequences by cleverly editing shots filmed all across Southern California.  And we can savor the moments of everyday life captured in the background of their films.

Having lived with this material for so long, in my mind’s eye I can stroll around the Keaton Studio block, or from the Bradbury Mansion to the balustrade overlooking the Hill Street Tunnel, and picture every step of the way.  It is the closest thing to time travel I will likely ever experience.

My hope is my books will instill a similar sense of time and place, so readers can envision the landscapes of early Hollywood as well.  This blog supplements my books with tours, videos, and PowerPoint lectures that can’t be replicated in books, and new discoveries, and expanded coverage of the great silent clowns and their home turf, that would not otherwise be published.  Look also for discoveries concerning Harry Langdon, Charley Chase, and other silent stars.  I welcome your questions and suggestions, and invite you to step back in time with me to explore silent-era Hollywood as seen through the eyes of its greatest comedians.

John Bengtson is a business lawyer, film historian, and lecturer, whose books Silent Echoes, Silent Traces, and Silent Visions explore the early Hollywood history hidden in the background of the films of Buster Keaton, Charlie Chaplin, and Harold Lloyd. John’s work has been hailed by The New York Times as a “Proustian collage of time and memory, biography and history, urban growth and artistic expression.”  Each book features a foreword by Academy Award winning film historian Kevin Brownlow.  Bengtson has lectured at over sixty events, hosted among others by the Academy of Motion Picture Arts and Sciences, the Turner Classic Movie Channel Film Festival, Cineteca di Bologna, both Film Forum and The Museum of the Moving Image in New York, USC, the American Cinematheque and Cinecon Classic Film Festival at the Egyptian Theatre in Hollywood, and the UCLA Film and Television Archive, and has provided commentary and bonus programs for over a dozen Keaton, Chaplin, and Lloyd DVD/Blu-ray releases.  John serves on the Board of Directors of the San Francisco Silent Film Festival.