The cinematic roots for the three great kings of comedy, Chaplin, Keaton, and Lloyd, trace back to the earliest days of filmmaking. As reported HERE, Chaplin staged scenes from his 1914 Keystone films Those Love Pangs and Tillie’s Punctured Romance alongside the distinctive Mission-style walls of the Selig Polyscope Studio in Edendale (above), reportedly the first permanent 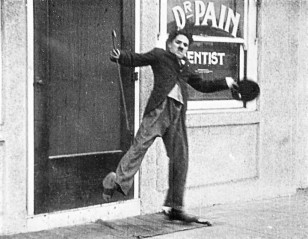 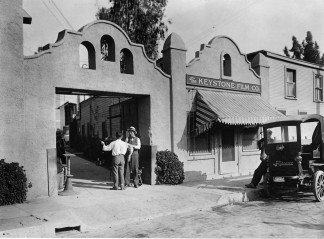 Edendale was familiar to Chaplin – he filmed the first scene of his career and many others beside a home adjacent to Keystone, and pretended the studio office door was a dentist office (above) in Laughing Gas (1914). 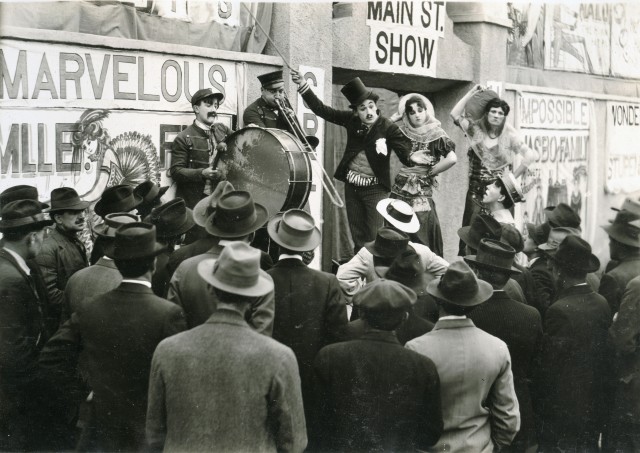 Harold in Lonesome Luke, Circus King (1916). Where was this?

But what about Harold? Lloyd historian Annette D’Agostino Lloyd reports in her invaluable Harold Lloyd Encyclopedia that Harold possibly appeared as an extra in at least four lost 1913 Keystone films. She writes he returned to Keystone late in 1914 to appear in at least five more films from February to July 1915, before then returning to work with Hal Roach. Given his brief tenure there, I’m not aware of Lloyd being filmed or photographed anywhere beside the Keystone studio facility.

Above, the Norbig Studios circa 1925, just up the street from Keystone. Marc Wanamaker – Bison Archives

But thanks to Annette, historians E.J. Stephens and Marc Wanamaker, and Lloyd photo friend and archivist Richard Simonton, we know Lloyd revisited his Edendale haunts shortly after leaving Keystone to make Ruses, Rhymes and Roughnecks during June-July 1915, then again to make Lonesome Luke, Circus King during January 1916 (both now lost), and returned at least a third time to film Hey There (1918) between 12/22/1917 – 1/26/1918. 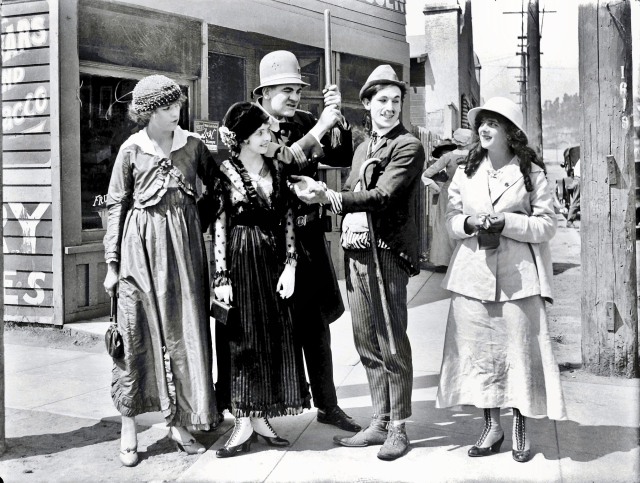 View One – Harold as Lonesome Luke in Ruses, Rhymes and Roughnecks (1915). Where could this possibly be?

How do we know? To begin, several years ago Richard sent me this Lonesome Luke Ruses View One photo (above) for location identification. I was intrigued, but there weren’t any useful clues, not even that 1619 telephone pole number. 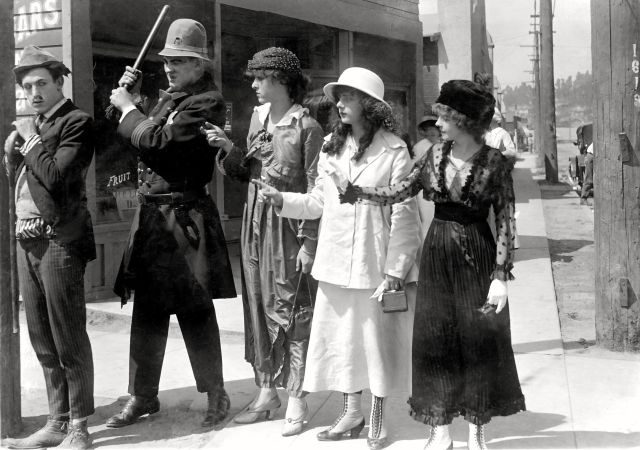 Years passed, when by chance I happened to look again at Harold’s Ruses View One photo. But this time, given my recent familiarity with the Selig Studio, I noticed a clue after all – a hint of some Mission-style towers at back. Mentioning this to Richard, he sent me this slightly more revealing Ruses View Two photo (above), depicting a series of Mission-style towers at back, configured differently than the Selig towers. 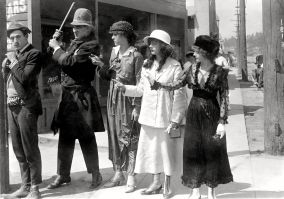 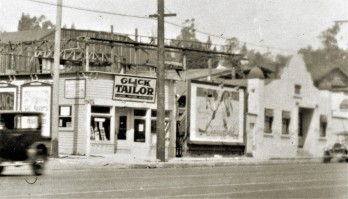 A quick check through E.J. Stephens and Marc Wanamaker’s book Early Poverty Row Studios provided the answer. Harold had posed for these Ruses photos at the NW corner of Aaron and Allesandro, with the Norbig Studio behind him up the street, shown in full view earlier in this post. Above to the right, this 1934 photo shows the same corner store at 1739 Allesandro to the left of the studio. Marc Wanamaker – Bison Archives.

1923 – the Norbig Studio and Harold’s corner to the left – the Keystone Studio to the right. HollywoodPhotographs.com 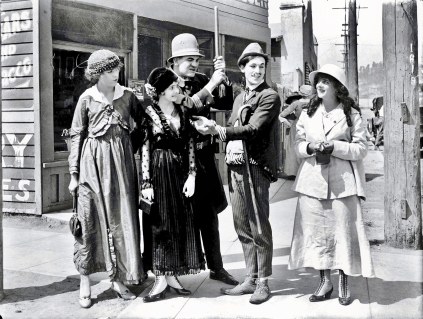 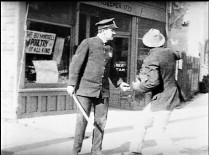 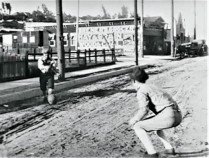 Knowing Harold stood kitty-corner from Keystone, I glanced over some Keystone films and found the same grocery appearing in the Charley Chase comedy Peanuts and Bullets (1915) (upper right) and in Roscoe Arbuckle’s Fatty’s New Role (1915) (lower right), both revealing the store owner’s name A. Brener. 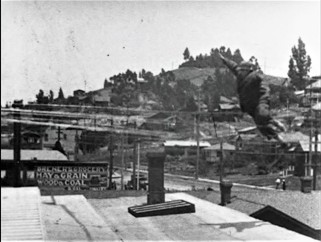 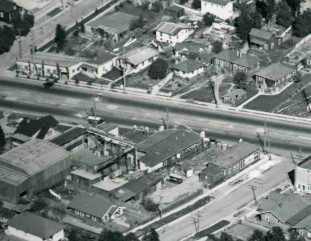 Another view of the Brener corner store in Arbuckle’s Fatty’s Tintype Tangle (1915), and a matching 1923 aerial view of the corner and neighboring Norbig Studio, its sole stage at left. 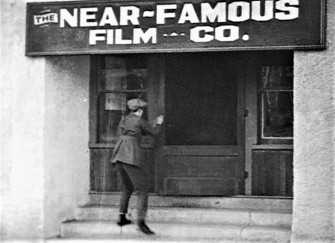 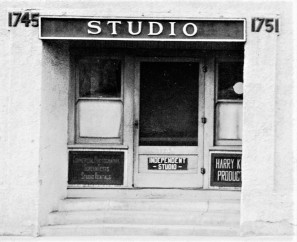 Marc reports the Rolin film company rented the Norbig Studio and laboratory in 1916, a relation, as seen here, that continued for the 1918 production Hey There, a Lloyd “Glass Character” comedy. Hey There chronicles Harold’s efforts to sneak into a movie studio to return a lost letter to Bebe Daniels. Above, matching views of the Norbig office doorway from the movie (left), and a detail from the broad circa 1925 Norbig photo

further above, with “STUDIO RENTALS” painted below the window. [UPDATE: Eagle-eyed reader Mike Forster noticed a telling detail, the sign to the right of the door for “HARRY K – eaton PRODUC – tions.” This is likely the former Universal silent comedian Harry Keaton (later Keatan) who also made films for L-KO and Century, formed his own small production companies, and was much later involved with low budget films in the 1940s-50s. The 1925 and 1930 city directories contain listings for Harry Keaton Productions at 1751 Glendale Blvd., the alternate street name for Allesandro. Buster Keaton’s younger brother was also named Harry, but seems the unlikely candidate represented by this small production company sign.] 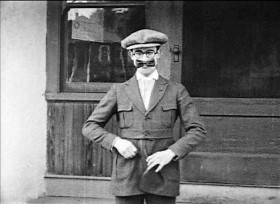 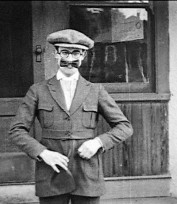 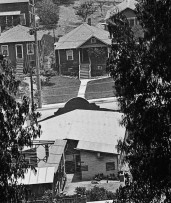 During one sneak attempt Harold fashions a mustache disguise with his bow tie. Reversing the view (center), the distinctive single window and porch stairs of the home across the street from the front office clearly match the window reflection. Marc Wanamaker – Bison Archives. 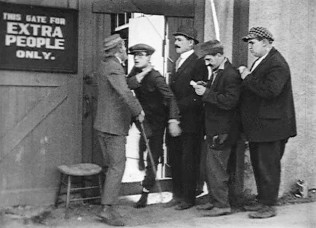 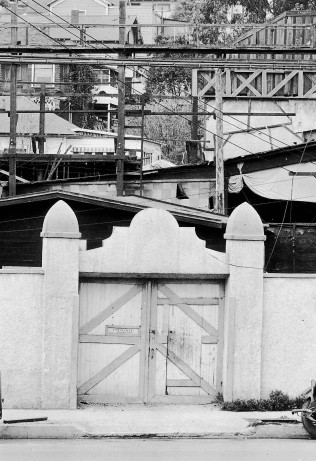 Hey There – matching details of the Norbig Studio gate entrance. 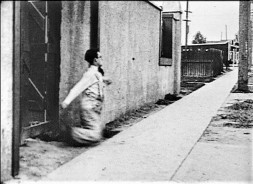 Hey There ends with Harold sprinting away from the Norbig Studio gate on his knees. 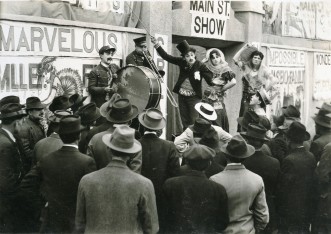 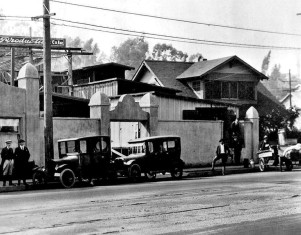 But what about Lonesome Luke, Circus King? Well, it too was clearly staged at the Norbig Studio entrance gate, matching the vantage point in this 1921 photo of the facility, named “Reaguer Productions” at the time. Marc Wanamaker – Bison Archives. 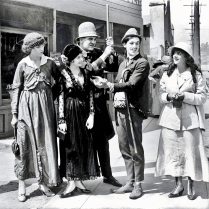 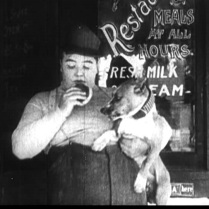 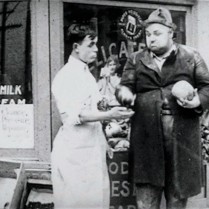 In closing, Roscoe Arbuckle posed by the same corner store for The Knockout (1914) and Fatty’s New Role (1915). Thanks again to Marc Wanamaker and Richard Simonton for supplying such wonderful photos. Thanks too for the DVD frames from Becoming Charley Chase, American Slapstick, and The Forgotten Films of Roscoe “Fatty” Arbuckle. HAROLD LLOYD images and the names of Mr. Lloyd’s films are all trademarks and/or service marks of Harold Lloyd Entertainment Inc. Images and movie frame images reproduced courtesy of The Harold Lloyd Trust and Harold Lloyd Entertainment Inc.

Below, a matching view Harold’s corner today at Aaron and now Glendale Blvd. Given Harold’s love of animals, especially Great Danes, it seems fitting it is now the site of an animal hospital.