When Charlie Chaplin began his film career at the Keystone Studio in 1914, the Selig Polyscope studio (above) stood just two blocks to the north, sandwiched between Clifford and Duane Streets along Allesandro (now Glendale Boulevard) in Edendale. Opening in 1909, Selig was reportedly the first permanent movie studio built in Los Angeles. I was unfamiliar with Selig, but when I first noticed it in a vintage photo, I realized it was the setting for several scenes from Chaplin’s Keystone career. 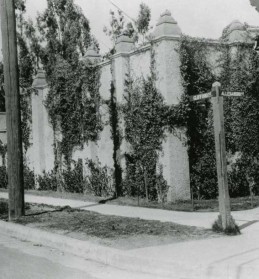 A similar wall sloping uphill with matching turrets appears above as Charlie flirts with a pretty girl during Those Love Pangs (1914). Given the matching elements and its location two blocks from the Keystone Studio, I’m convinced Charlie filmed this scene looking west uphill along the Duane Street side of the Selig studio wall.

Next, using the Love Pangs frame (upper left) as a reference, I’m convinced these scenes from Tillie’s Punctured Romance (1914) were also filmed on Duane Street, further uphill, along the back corner of the Selig studio wall. The short lattice fence beside the children in the Love Pangs frame appears clearly here in the Tillie frames. The two homes at back were 2212 and 2216 Duane Street, now the site of modern apartments.

One discovery often leads to another. During Tillie, Charlie and co-star Mabel Normand seek refuge in a movie theater after stealing Tillie’s (Marie Dressler) pocketbook. They panic when the plot onscreen involves similar thievery, and they find themselves seated next to a detective played by Charley Chase. 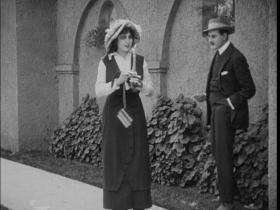 After learning that the Selig studio wall facing Allesandro was lined with a series of inset curved arches, it’s clear that the film-within-a-film drama (see above) that upset Charlie and Mabel was filmed alongside the studio wall.

Likewise, this film-within-a-film view from Tillie, above left, shows the Clifford/Allesandro corner gate entrance to the Selig Studio. 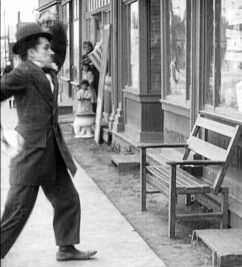 A final tidbit, just for fun. While King Vidor’s celebrated “everyman” drama The Crowd (1928) caused a minor stir for daring to show a flush toilet in the background of one domestic scene, often cited as the porcelain appliance’s screen debut, it appears Tillie beat this record by more than a dozen years. There must have been a hardware or plumbing store near the small restaurant where Marie Dressler works during Tillie. The children at back are too fascinated watching Charlie at work to notice they are standing behind a commode, apparently promoted for sale as a sidewalk display.

I detail many other Tillie locations in my book Silent Traces, and other “new” locations elsewhere in this blog (HERE).

Be sure to check out the wonderful Flicker Alley Chaplin at Keystone DVD collection that makes these discoveries possible.

Below, site of the former Selig Polyscope studio at 1845 Glendale Blvd.

18 Responses to Chaplin’s Earliest Scenes Beside the Selig Studio