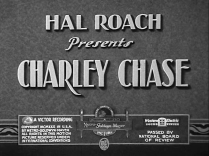 This post covers Charley in Fast Work (1930), co-starring June Marlowe before she would soon debut in her immortal screen role as Our Gang schoolteacher Miss Crabtree in Teacher’s Pet (1930). June agrees to go out with Charley if he can first get her dad’s permission. Only Charley tries to impress the wrong man, a dapper mental asylum escapee he mistakenly thinks is the father.

The lunatic, played by Dell Henderson, acquires Mr. Marlowe’s identity, portrayed by Charles K. French, when they accidentally knock each other down at a blind corner (above), and exchange business cards as a courtesy (Henderson left, French right, below). The print is so clear you can read Orange Grove Ave. on the street sign. The crash was staged beside the Orange Grove Apartments at 7850 Sunset Boulevard. 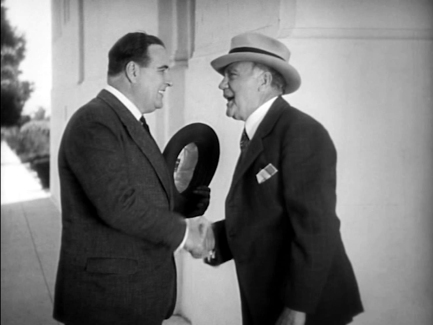 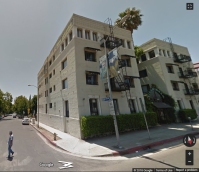 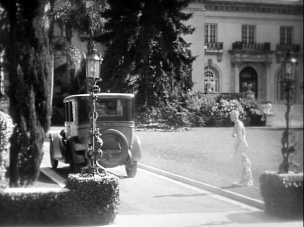 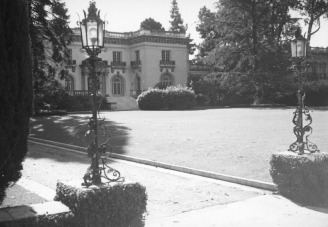 The grounds may appear familiar to Laurel and Hardy fans, as it was here the duo filmed Another Fine Mess later that year. The mansion was built in 1910 by Secondo Guasti, and was later owned by film choreographer Busby Berkeley. The mansion is now home to the Peace Awareness Labyrinth & Gardens and is open for tours.

The mansion appears in numerous films, including Stan Laurel’s early solo silent comedy White Wings (1923) (above left), and again in the Charley Chase DVD set during What A Bozo! (1931) (lower right). 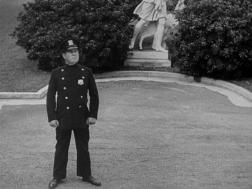 Above, matching scenes from Another Fine Mess (Thelma Todd and Charles K. Gerrard upper left and Harry Bernard right) and Fast Work with Charley and June lower left and arriving by taxi, center. 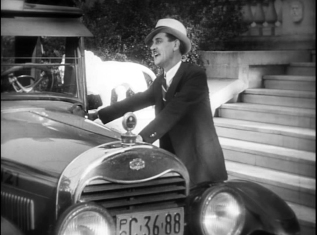 This shot of Charley at the mansion front steps matches Laurel and Hardy fleeing the mansion wearing a wildebeest costume during Another Fine Mess. 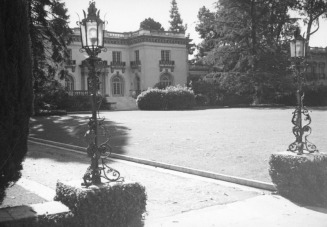 Above, overjoyed when June agrees to give him a chance, Charley spies a statue of Venus on the front lawn of the mansion, and runs to caress the lovely figure.

When Charley spies the Venus statue, the historic Wilfandel house at 3425 W. Adams across the street appears in view. Now home to The Wilfandel Club, you can read more about the home at the wonderful Historic Los Angeles Adams Boulevard blogpost for 3425 HERE.

A suspicious cop (Pat Harmon) checks out Charley and then chases after him. Looking NW, these homes at back along 6th Avenue north of Adams are still standing.

Fleeing the cop, Charley and the lunatic also accidentally knock each other down, this time beside the Havenhurst Apartments at the corner of Whitley Avenue and Franklin Avenue. This classic Hollywood apartment stands nearly 12 miles away from the Guasti mansion on Adams appearing in the immediately prior scene. 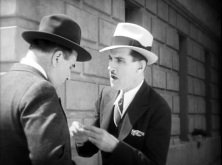 The escapee offers Mr. Marlowe’s card to Charley as his own. Delighted to meet June’s “father,” Charley takes the lunatic to lunch with hilarious consequences. 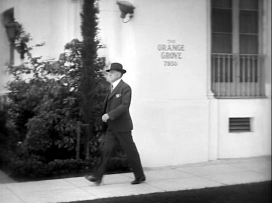 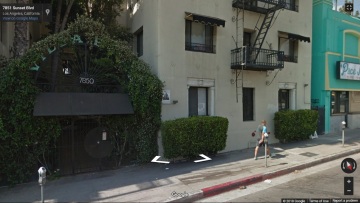 Last, a brief traveling shot of Charles French as Mr. Marlowe walking beside the Orange Grove Apartments, on the way to meet his daughter.

You can read all about the Los Angeles hills and tunnels appearing in the concluding scenes from Another Fine Mess (above) at this post HERE.

Charley Chase: At Hal Roach: The Talkies Volume One 1930-31, titles include The Real McCoy, Whispering Whoopee, All Teed Up, Fifty Million Husbands, Fast Work, Girl Shock, Dollar Dizzy, Looser Than Loose, High C’s, Thundering Tenors, The Pip from Pittsburg, Rough Seas, One of the Smiths, The Panic Is On, Skip the Maloo!, What a Bozo!, and The Hasty Marriage, with bonus comedy “La Señorita de Chicago” (Spanish version of “The Pip from Pittsburg”).

The Gausti Mansion at 3500 West Adams Boulevard today – the formal front lawn and garden is now a parking lot.