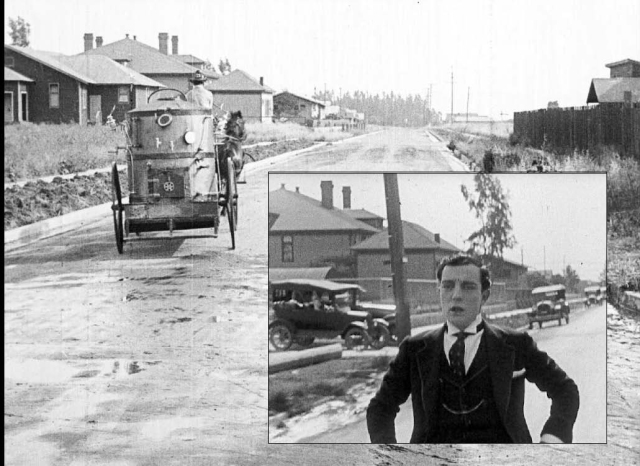 Looking south down Lillian Way from Eleanor towards the Vine Street Elementary School – Chaplin in The Fireman and Keaton (inset) in the same spot eight years later in Sherlock Jr. Their common studio stands off camera to the right.

Because Charlie Chaplin filmed his Mutual comedy shorts (1916-17) at the same small studio where Buster Keaton later filmed his independent shorts and features (1920-28), many common locations and settings appear in their films (see above).  I explain this in great detail in my books, and in other posts, in part by deconstructing vintage aerial photographs looking south towards the studio that once stood at 1025 Lillian Way in Hollywood at the SW corner of Eleanor. 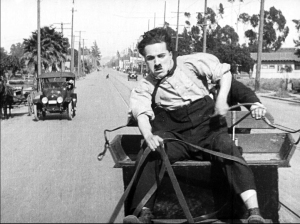 Looking east down Santa Monica Blvd. past Cole. From here Chaplin’s small studio stood one block back and to the south.

Chaplin’s The Fireman (1916) is particularly interesting, as he filmed a racing fire engine on many streets adjacent to the studio, some identified in my book, while others remained elusive, until now. A 1920 Hollywood publicity manual, Who’s Who On The Screen, ed. by Charles Donald Fox and Milton L. Silver, contains at pages 152-153 a rare eastern (not southern) aerial view of the studio, providing a novel vantage point that confirms not only several locations from The Fireman, but from Keaton’s early short comedies Convict 13 (1920), The Scarecrow (1920), and The Playhouse (1921) as well. The HathiTrust uploaded the 1920 manual, containing hundreds of Hollywood star portraits and profiles, which may be viewed directly HERE. With the above overall aerial view looking east as a guide, this post reveals seven new Chaplin and Keaton locations. Click each image to enlarge it for a closer look.

This same general view above also matches scenes from Keaton’s Convict 13, The Scarecrow, and The Playhouse. 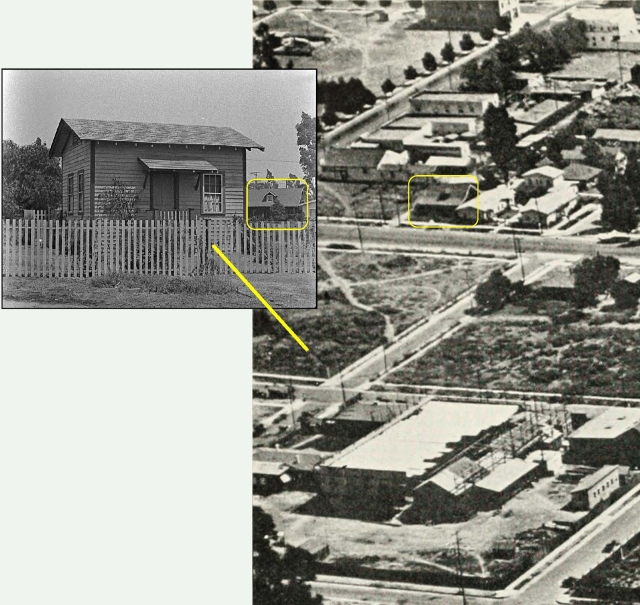 The ‘rural’ cabin Buster and Big Joe Roberts share in The Scarecrow was built on this vacant lot kitty corner from the studio. The distinctive single dormer home at 1062 Vine Street again appears at back. 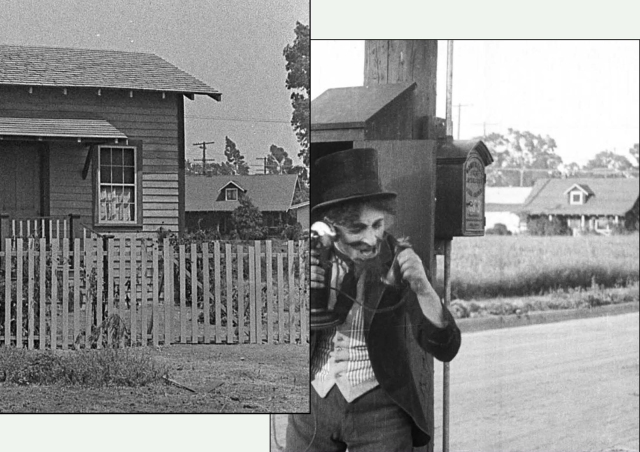 A closer view of 1062 Vine Street appearing in two films; Keaton’s The Scarecrow and Chaplin’s The Fireman.

In Keaton’s Convict 13 the police question a painter about his paint-striped clothes at the gated entryway into the studio grounds. The back of the market at 6248 Santa Monica, east of Vine (yellow box), appears through the entrance. 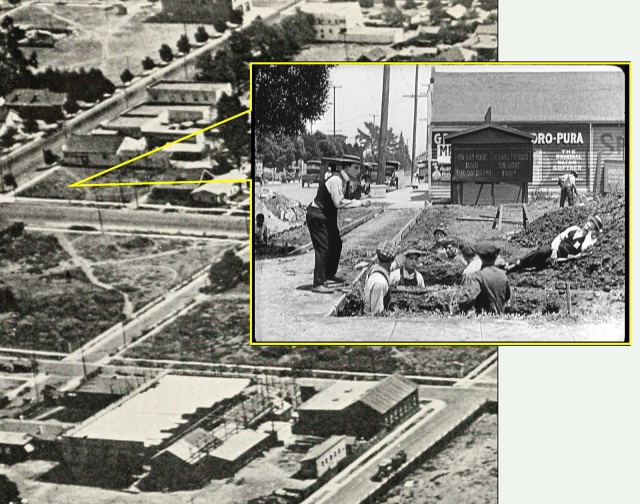 In Keaton’s The Playhouse Buster invites a group of ditch-diggers to join his vaudeville show, while the market at 6248 Santa Monica Blvd. stands at back – barely a block from the studio in the foreground.

Returning to Convict 13, Buster runs south down Lillian Way by the studio office, with the shadow of Leo White’s telephone pole (blue), a car driving north up Vine (red box), and the homes at 6200 and 6206 Eleanor (yellow box) at back.

My book Silent Traces shows Chaplin filmed fire engine scenes near the studio on Lillian Way coming north towards Eleanor (see top of post), and going south down Cole from Willoughby, while filming other scenes at former Fire Station No. 29 at 158 S. Western Ave. Thanks to the ‘new’ aerial view looking east, and the clarity of the Blu-ray release of Chaplin’s Mutual Comedies, two further fire engine scenes are now evident.

In The Fireman, filmed in 1916, the wagon turns sharply from east on Willoughby to north on Cole (arrow), with 911 Cole (yellow box) standing watch.

Looking NW at the corner of Willoughby and Cole, with 917 Wilcox (left box), the only structure in this image to survive, apart from Yamashiro’s (inset) high on the hill at back.

A final fire engine scene, this time looking east down Willoughby towards Cahuenga.

Filmed in 1916, this view looks east down Willoughby as the wagon turns south on Cahuenga. 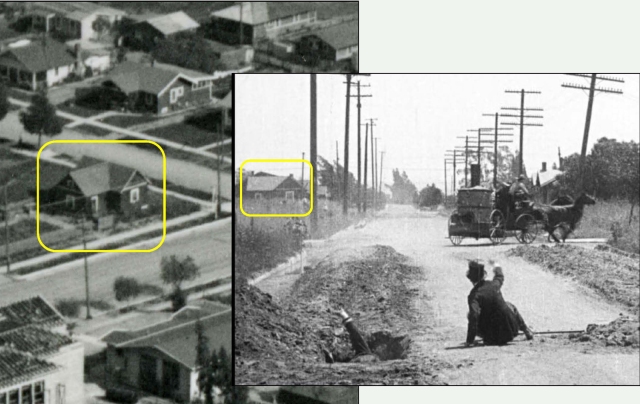 I first became aware of the 1920 eastern view aerial photo on the Noirish Los Angeles Skyscraper forum, a remarkable resource for finding vintage images of Los Angeles. The forum not only highlights vintage photos from the Los Angeles Public Library, and the USC Digital Library, but also rare photos posted on eBay and other obscure sources. My thanks to Noirish forum posters ‘GaylordWilshire’ and ‘HossC’ for their assistance with this article.

Looking SW towards the corner of Lillian Way and Eleanor, site of the former Chaplin and Keaton Studios. A sidewalk plaque honoring Keaton, but neglecting to mention Chaplin, stands across the street on the near corner.