During Speedy Harold Lloyd chases after his errant taxi by jumping on a passing car in front of 339 E. 57th St in New York. The four identical apartments to the east are now all lost to much taller buildings.

Harold Lloyd’s final silent comedy Speedy, filmed on location in New York during the summer of 1927, is a goldmine of vintage Manhattan locations.  While my book Silent Visions devotes 100 pages to the dozens of NYC (and Los Angeles) appearances in the film, and my other posts cover Speedy in great detail, there always seems to be one more setting awaiting discovery.

Harold’s first day as a taxi driver is a complete disaster. His troubles begin when he mistakes a construction site supervisor, waving to a land surveyor, as a customer flagging down a cab (below).  As Harold pulls over beside the active construction site, a painted wall at back advertises a number of 4-6-7 room apartments that will become available. Try as I might, this setting eluded my detection, but that 4-6-7 wall sign stayed with me.

Looking to the NE, Harold parks beside the construction site for the 410 E. 57th St. apartments. The Queensboro (59th St.) Bridge appears at back.

I recently had the honor of spending a few hours looking through the Harold Lloyd film storage vault, studying the photos on file.  Aside from the thousands of 8×10 publicity stills taken to promote his films, Harold’s team also took a number of smaller 4×5 glass negatives, some candid shots, some location shots, to assist with production issues.  Although I only had time to glance at a few of these 4×5 negatives, by complete chance I pulled a slide that had a 4-6-7 sign painted on a wall. When my friend Richard Simonton arranged to send me a “positive” scan of the shot, I could instantly see that this was the setting where Harold filmed.  What’s more, the image revealed the future apartment’s complete address, 410 E. 57th St.

Helping a customer with his luggage in front of the 410 construction site, Harold at first does not notice his cab being towed away. The red lines in each image above depict the same buildings along 419-433 E. 57th.

I had hoped to solve this mystery early on by focusing on the modest scale Corn Exchange Bank branch visible on the SW corner of 1st Avenue and E. 57th St. during the scene (see left), but the bank once had twenty or more offices around New York, and so many Manhattan corner properties have since been upgraded that the spot eluded detection. A modern Chase Bank branch stands at the spot today. 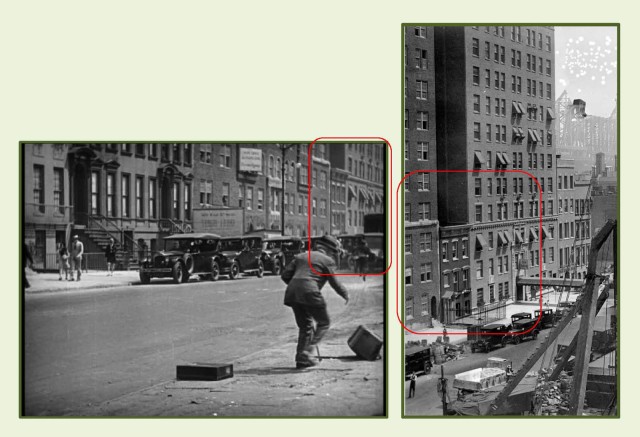 As Harold chases after his cab, his customer notices that the bottles of illegal booze hidden in his valise are now broken. The red box marks the same extant buildings in each image.

The world depicted by Speedy does not match geographic reality.  Harold first chases after his taxi by running east along E. 57th St, from 1st Ave. Yet in the next shot (see left) he chases his taxi by jumping on a car going east along E. 57th St. towards 1st Ave. (see scenes at the top of this post). Thus, this later shot (left) looks east towards the prior spot where Harold filmed, revealing common details as shown below.

The same apartment for rent sign appears in both movie shots. 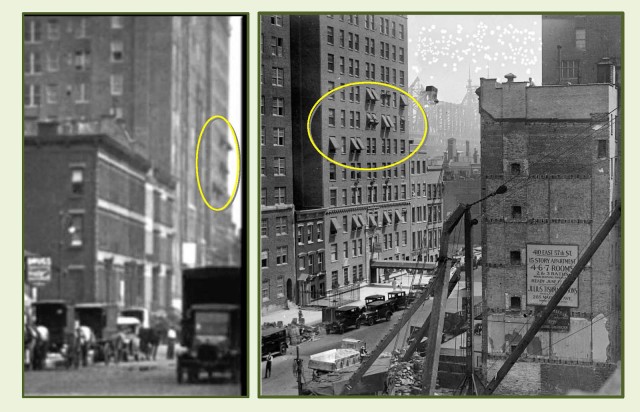 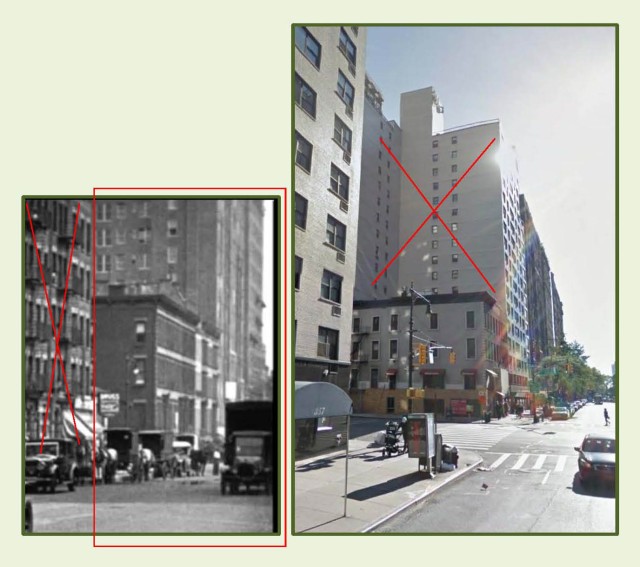 The view looking east towards 1st Ave. shows the same short building standing on the NE corner of E. 57th St. A tall modern apartment in the color view (X) stands where shorter buildings once stood.

The scene with Harold chasing after his taxi continues with a sequence filmed in Los Angeles (!) looking towards the Mayfair Hotel where scenes from the noir thriller Edge of Doom (1950) and the hit television comedy The Office were filmed.  You can read more about this location at this post HERE.

Harold’s chase after his taxi continues next in downtown Los Angeles! You can read about it HERE.

With this latest discovery on E. 57th St, fewer and fewer locations from Speedy remain undetected.