Click to enlarge this image and each image below. Which three of these buildings survive?

theater usher who falls in with a gang of crooks, and then flees to Los Angeles seeking a new life. Once there he stumbles into the movies and becomes an unlikely star, prompting the old gang to seek him out for blackmail and revenge.  The movie opens with dozens of uniformed Warner Bros. movie theater ushers lining up for inspection on an open downtown rooftop. Jimmy arrives late as usual, but charms his way out of trouble.

Who’s late for roll call? Cagney (arrow) and the WB ushers on the roof of the former Arnold Building auto dealership and parking garage at 7th, Figueroa, and Wilshire, (5) above on the map. LAPL.

The movie begins with the ushers lining up for inspection. The existing Barker Brothers Building, 818 W. 7th Street, (4) above, appears to the right. LAPL.

When Jimmy dashes onto the roof from the stairwell shed, the former Bible Institute Building at 6th and Hope Street, (1) above, appears at back. LAPL. The building later installed a pair of large neon “JESUS SAVES” rooftop signs that became a downtown landmark. The orange oval marks the Bible Institute wall sign – the yellow oval marks the Pacific Finance Building wall sign discussed below.

The side of the former Pacific Finance Building, (2) above, appears at back.  The building originally stood facing an alley that later became part of Wilshire Boulevard, when Wilshire was extended east from Figueroa to Grand during 1930-1931. The Pacific Finance Building was replaced by the 62 story First Interstate Bank Building, completed in 1973, and now called the Aon Center.    LAPL.

The former Gates Hotel at 6th and Figueroa, (7) above, and former Richfield Building at 6th and Flower, (8) above, appear at back. The yellow oval marks the same letter “S” on the GATES rooftop neon sign. The Richfield Building, clad in black and gold terra cotta tile, was recognized as one of the great Art Deco masterpieces of modern architecture, but was sadly demolished in 1969. LAPL.  LAPL.

This broad reverse view shows the stairwell shed on the roof of the Arnold Building garage (yellow box) from which Cagney emerges, as well as matching details on the back of the Gates Hotel (narrow yellow box). The red arrow marks the back of the LAFD Engine Co. No. 28 building, as it appears in the main photo, and the front as it appears in the movie.  Directly above the red arrow stands the former St. Paul’s Cathedral that stood on Figueroa (1923-1980). LAPL. 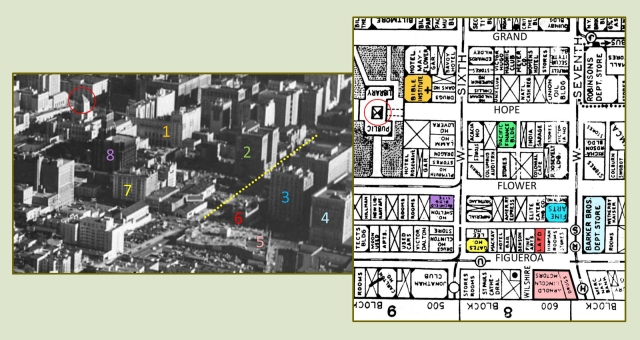 Click to enlarge. This later aerial view shows the various buildings in relation to the Arnold Building roof (5), and the tower of the Los Angeles Public Library Building (circle). Note on the circa 1928 map that Wilshire Boulevard, to the left of the pink Arnold Building, then terminated at Figueroa. The aerial photo shows Wilshire (dotted yellow line) extending three blocks further from Figueroa to Grand, as completed during 1930-1931. USC Digital Library.

The Arnold Building was demolished to make way for the ultra-modern Statler Hilton Hotel that opened in 1952, at the time the largest hotel built in the US since the Waldorf Astoria in 1931. The massive hotel, once a downtown landmark, was recently obliterated to make way for the new 70 story Wilshire Grand Center currently under construction and set to open in 2017.  You can read all about the Statler Hotel’s demise at Steve Vaught’s entertaining and informative Hollywood architecture blog Paradise Leased.

Jimmy and Mae Clark flee “New York” for sunny California, as touted by this brochure (right), only to arrive by train during a thunderstorm.  The establishing shot of their arrival, below, shows the back of the Santa Fe Depot that was used perhaps more often than any other station as a filming location.  Harold Lloyd used the same station for scenes from both Girl Shy (1924) and Movie Crazy (1932), while this post shows how the station appears with Max Linder and Laurel & Hardy.

Jimmy arrives in “sunny California” at the rear of the Santa Fe Depot, a very popular place to film that appears in dozens and dozens of films. This post shows how Max Linder and Laurel and Hardy also filmed at the same depot. USC Digital Library.

The gang fixes for Jimmy to be arrested on trumped up charges so they can follow and kill him after he is released from jail.  Mae Clark posts Jimmy’s bail, and picks him up beside the Hall of Justice in downtown Los Angeles, the true setting where criminals were jailed at the time.

Cagney’s car pulls away from the Hall of Justice, on the corner of  Broadway and Temple, towards the south face of the Broadway Tunnel. Completed in 1925, the recently refurbished Hall of Justice building reopened in 2014 after being shuttered for decades. While the building looks good as new, the Broadway Tunnel and its supporting hill were removed in 1949. USC Digital Library.

Despite initially being in on the plot to have Jimmy killed, Mae Clark warns him they are being followed, touching off a chase around Hollywood.

The action skips to Hollywood. Cagney and Mae Clark are chased down Vine Street from Hollywood Boulevard past what is now the Montalban Theater located at 1615 Vine Street (red box). LAPL.

Next, the killers chase Cagney north up Wilcox, where he turns left, west, onto Sunset Blvd. The extant Hotel Wilcox appears up the street in each image (yellow box). Notice that Wilcox was not yet a through street when this aerial view at left was taken in 1928. Marc Wanamaker – Bison Archives; USC Digital Library.

Looking north up Wilcox from Sunset Boulevard today. The Hotel Wilcox is still standing up the street.

Following a prolonged chase and gun battle, the movie ends in true Hollywood fashion – the crooks are vanquished, Mae the gun moll is rehabilitated, and Jimmy resumes his film career and weds a movie star.

Wrapping up, Harold Lloyd filmed a number of early street scenes in Hollywood for his thrill comedy short Never Weaken (1921).  The isolated shot below, edited to match with those filmed in Hollywood, was for some reason also filmed in downtown beside the Arnold Building, the same spot where Cagney would film on the roof a dozen years later. 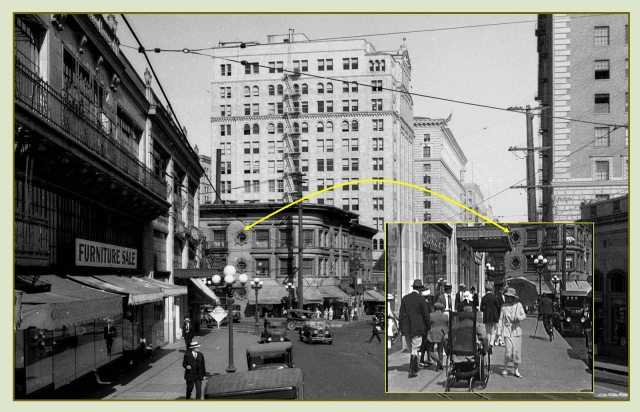 Looking east along 7th Street toward the corner of Figueroa, with a matching view (inset) from Harold Lloyd’s Never Weaken. The Arnold Building, where Cagney filmed on the roof, stands to the left. The prominent Fine Arts Building, at the center, and the tall Barker Brothers Building, to the right, remain standing. USC Digital Library.

A view of the Barker Brothers Building.