Chaplin – 100 Years Ago on Sunset Boulevard

“Sunset Boulevard” – few words evoke the mystique and glamour of Southern California more than the name of this historic street that wends its way west from the heart of downtown Los Angeles to the Pacific Ocean. As discussed here, the busy street passed within a few blocks of the Keystone Film Co. studios where Charlie Chaplin began his movie career in 1914.  The remarkable image quality of the new Chaplin at Keystone collection from Flicker Alley, resulting from seven years of exacting restorations performed by Cineteca di Bologna and the British Film Institute in association with Lobster Films, confirms Chaplin filmed many scenes on Sunset Boulevard more than three decades before the landmark film starring Gloria Swanson and William Holden premiered in 1950.

Standing Pat (1928) looking west down Sunset towards Engine Co. No. 20.  The tall narrow tower (box) told me this building was likely a fire station.

At top of this post, a band of Keystone Kops fall over themselves during the chase and gunfight climax of Tillie’s Punctured Romance, starring Charlie Chaplin, Marie Dressler, and Mabel Normand.  I solved the Tillie location when I noticed it was the same street scene (directly above) appearing in Standing Pat, “A Ton of Fun” comedy starring the overweight trio Hilliard Karr, Frank Alexander, and ‘Kewpie’ Ross.  The tall narrow tower (box, above) was a common feature used at fire stations to hang wet hoses to dry, and checking the Los Angeles Fire Department Historical Society confirmed the setting as 2144 Sunset Blvd.

Engine Co. No. 20 appearing both in Tillie’s Punctured Romance and in A Film Johnnie (1914) as the trolley tracks on Sunset curve north at Mohawk Bend.

The “transitive theory of film location confirmation” now starts kicking into high gear.  Standing Pat confirmed the fire station at the SW corner of Sunset and Mohawk Street, which confirmed Tillie, so when I noticed the station also overlaps with a scene from Chaplin’s A Film Johnnie (above), the station confirmed that movie as well.  A leads to B leads to C. 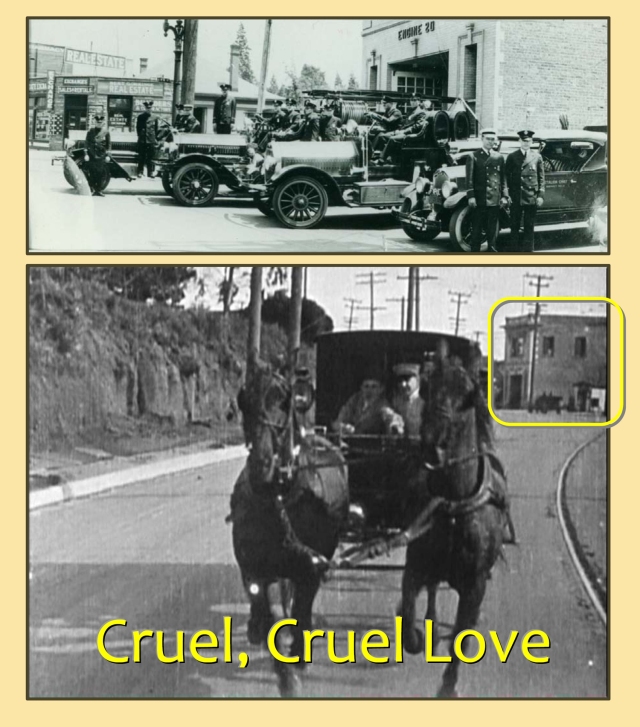 Switching perspective, now looking east towards Mohawk Bend on Sunset, the fire station at top confirms the above scene from Chaplin’s Cruel, Cruel Love was also filmed on Sunset.

Knowing Chaplin filmed one scene for A Film Johnnie looking west beside the trolley lines on Sunset, it seemed likely the scene to the left was also filmed beside the Sunset trolley line, only this time looking east. 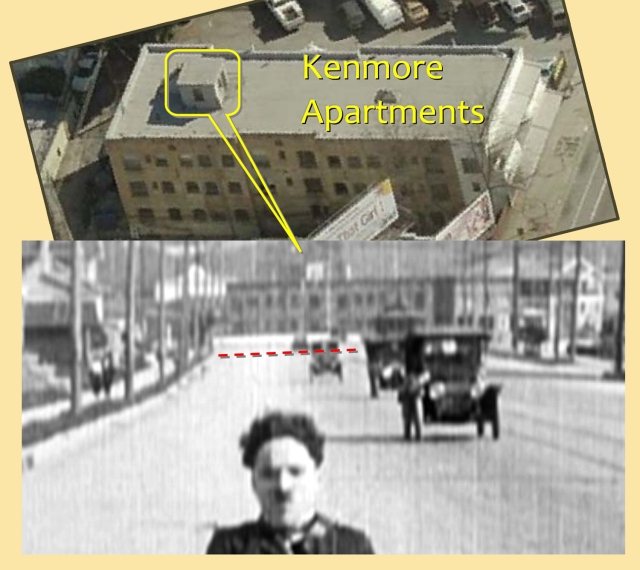 The extant Kenmore Apartment building at back – the dotted red line marks the guard rail where Sunset crosses over Glendale Blvd.

The Kenmore Apartments as it appears during a scene from Cops (1922).  Originally numbered 1817 Sunset, a portion of the apartment sign reading “181*  Kenmor*” appears at back.  The front of the Kenmore was remodeled with streamline moderne elements in 1937 (permit issued 03-25-1937) to accommodate commercial store fronts on the ground floor.

Remarkably, the Kenmore Apartments played a later role in film history, portraying the new home of the family whose wagon-load of furniture is destroyed during Buster Keaton’s classic short film Cops.

Although the Kenmore (built in 1912) is still standing, it’s no longer possible to replicate the view of the Sunset/Glendale overpass from A Film Johnnie as the more “modern” Roberts Arms (built in 1922) today blocks the view.

This 1914 map shows Charlie’s path along Sunset from the Kenmore (upper right oval) towards the fire house (lower left oval). Notice the proximity to Echo Park where many Keystone comedies were filmed.

Recapping – Engine Co. No. 20 at Mohawk Bend as it appears in A Film Johnnie, Tillie’s Punctured Romance, and Standing Pat.  A comparable view of the larger, modern fire station on the same corner appears below.

For another fun location from A Film Johnnie, you can read HERE how the beautiful (and still standing) Bryson Apartment building stood in for the Keystone Studios during the film.

For additional Sunset history connections: (1) as explained in my book Silent Traces, Chaplin filmed his roller skate escape at the conclusion of The Rink (1916) along Sunset Blvd. near Occidental Blvd., and filmed a discarded scene from The Circus (1928) along the Sunset Strip near the former Café La Boheme at 8614 Sunset Blvd., (2) Buster Keaton filmed a scene from Cops at Sunset Blvd. and Detroit, a block from the Chaplin Studio, as shown in my post HERE; and (3) family-man Ward Cleaver’s office in the Leave it to Beaver TV show was located at 9034 Sunset Boulevard, as shown in my post HERE.

Chaplin at Keystone: Copyright (C) 2010 by Lobster Films for the Chaplin Keystone Project.  Cops licensed by Douris UK, Ltd.  Special thanks to Robert Arkus for supplying me with a copy of Standing Pat.

A view towards the remodeled fire house today

This maps shows the Keystone Studio site at 1712 Allesandro relative to Engine Co. No. 20 at Mohawk Bend, and the Kenmore Apartments near the Glendale Blvd. overpass.

17 Responses to Chaplin – 100 Years Ago on Sunset Boulevard