My friend Steve Vaught, who writes a wonderful blog about historic Hollywood and Southern California architecture at Paradise Leased, recently appealed to his readers, with great success, for help identifying certain classic Hollywood homes.  So I thought I would give this puzzle a public airing.

Charlie Chaplin, Stan Laurel, and lesser known comic Hank Mann all used the above setting as a jail location.  Although it almost looks as if it were some type of warehouse, the fact that three separate comics used it as a jail leads me to believe it was a real jail.   I’ve tried every which way to solve this puzzle, but have had no luck.  Does anyone have any ideas about where or what this might be? 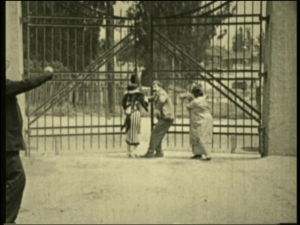 A view of the gate from the inside, as it appears in Hank Mann’s The Janitor.

UPDATE – We already have a solution!

My friend Mary Mallory wrote in wondering if this setting might have been the LA County Morgue, at 1104 N. Mission Road, that appears as a “jail” in the Laurel & Hardy comedies The Second Hundred Years (1928), and The Hoose-Gow (1929).  This was the break I was looking for.

The Morgue was actually part of the original Los Angeles County Hospital, a complex of about a dozen buildings standing on the east side of Mission Road between Zonal Avenue to the north and Marengo Street to the south.   The complex was built prior to 1915 (Chaplin filmed in 1916).  We know from the Laurel & Hardy frame above that the Morgue had gates identical to our mystery gate.  (The Laurel & Hardy gate, in fact, was on Marengo Street).  Moreover, the elements within the yellow box (above) of the Psychopathic Ward of the Los Angeles County Hospital seem to match the elements of the mystery spot.

I will confirm with a future post that the Chaplin jail was in fact the front gate to the former Psychopathic Ward.  While the Laurel & Hardy gate stood/stands on the south side of the hospital campus on Marengo Street, the Chaplin gate stood on the north side of the campus, by the bend in the road on Zonal Avenue (formerly Griffin Avenue), just east from the corner of Mission Road. 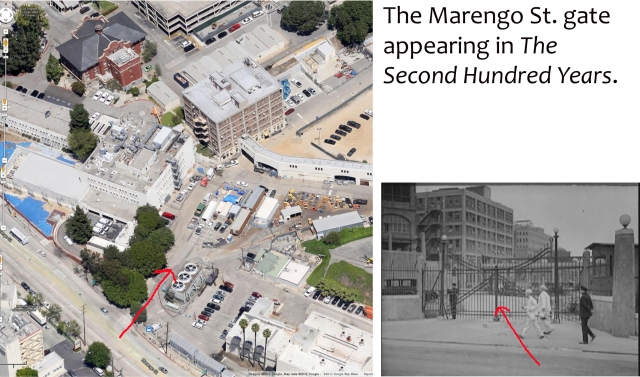