Buster Keaton would travel hundreds of miles to find just the right setting for a shot.  But he was also practical, and filmed dozens of exterior scenes at or adjacent to his small studio.  I am not aware of any documentary or newsreel footage taken of the Keaton Studio, and thus, the glimpses of Keaton’s home turf appearing in the background of his films are likely the only movie records we have.  (I write more about this in the About Silent Locations section on my blog, and in my first post, while my book Silent Echoes covers these discoveries in great detail.)  Since acquiring other aerial views of the Keaton Studio, and the new Keaton Blu-ray releases, I have made several more discoveries about filming at the Keaton Studio, and describe a few of them here.

Click to enlarge.  Two scenes from Day Dreams filmed on the Keaton Studio backlot, adjacent to the oval, below.  At the right, Buster waits for a ladder holding some cops to fall into a delivery chute. 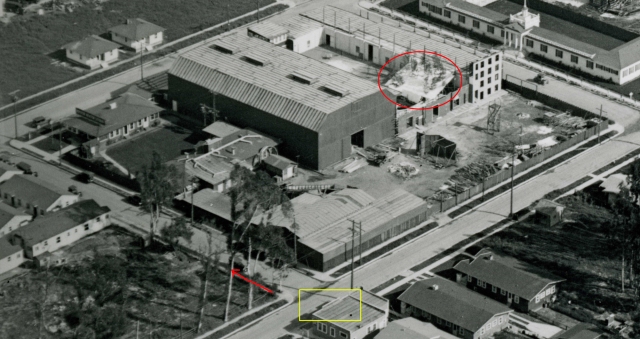 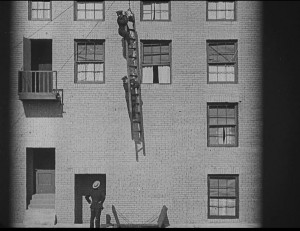 Day Dreams.  This scene was cropped to highlight the action, AND to cover up how narrow the set was.

During Keaton’s short film Day Dreams (1922), Buster lures the police chasing him up a fire escape, and returns to earth on the escape ladder’s counter-balance weight.  Keaton hitches the weight to a departing delivery truck, which pulls the ladder free from the wall, leaving the police suspended in air, until the wire snaps, and they drop into the sidewalk delivery chute Buster has opened at their feet.  The grocery set appearing behind the truck, and the 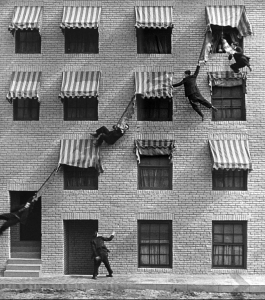 building wall appearing during the scene, were built at the Keaton Studio, as shown above.  On the Blu-ray you can see the outline of three window openings on the set that were covered over during the filming, perhaps so the police would stand out more against the blank wall. [UPDATE] – this unusual set was actually built in order for Buster to perform a remarkable stunt escaping the police, in this recently restored additional footage from the closing scene of My Wife’s Relations (1922) – see full post about this new footage HERE. 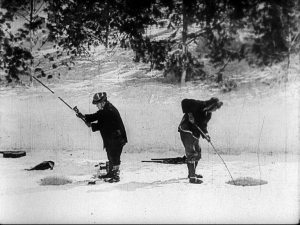 During his feature comedy Sherlock Jr. (1924), Buster plays a movie projectionist who dreams himself into the movie he is projecting.  Upon entering the movie “world,” Buster finds himself stationary as the movie background edits behind him.  Thus, Buster first finds himself in a garden, then on a city street, then in a jungle, and so forth.  Stranded on a coastal rock, Buster dives into the surf, only to land instead in a snow bank built at the studio (shown above).    [UPDATE: The snowbank was actually a leftover set built for a gag in Keaton’s The Frozen North (1922), where Buster and another ice fisherman are unaware they have hooked each other’s lines.  The snow bank set was built with ice-holes high enough off of the ground to allow the other fisherman to dive into the frozen “lake” and emerge from Buster’s side.

Click to enlarge.  The sign for the Coffee Cup Cafe (yellow box), appearing in Keaton’s short comedy The Blacksmith (left), appears behind Buster during this scene from Sherlock Jr. (right).   The arrow and yellow boxes correspond with the aerial photo above, and below.

The arrow marks Buster’s path above – walking away from the Coffee Cup Cafe.  The fence alongside Buster in the above right frame was not yet built at the time this photo was taken.  Bruce Torrence Hollywood Historical Collection – HollywoodPhotographs.com.

Later in Sherlock Jr. Buster’s dream character becomes a master detective held captive by villains.  Buster escapes by diving through an open window, across which his assistant has stretched out a beggar-woman costume.   Buster dives into the dress, and out the window, in one continuous movement.  Moments later (see above), a villain confronts Buster while in disguise on a sidewalk directly across the street from the Keaton Studio barn. 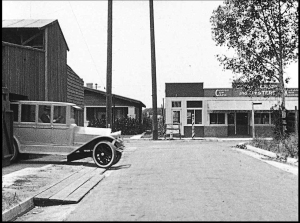 Click to enlarge.  The Blacksmith and the Coffee Cup Cafe, home to Klean Kwik Kooking.

The studio barn, formerly at the corner of Eleanor and Cahuenga, appears prominently during Keaton’s 1922 short film The Blacksmith (see left).  As a customer backs his gleaming white car into the barn for repairs, we can see the barber pole for Sol Weisman’s barbershop, at 1031 Cahuenga, standing in the background.  Next door is the Coffee Cup Cafe, home of Klean Kwik Kooking, serving STEAKS CHOPS and OYSTERS.  A portion of this OYSTERS sign (yellow box above) appears behind Buster after his escape in Sherlock Jr.   It’s fun to imagine – did Keaton and crew eat at the Coffee Cup regularly?  Did any one visit Sol for a haircut?  Also, the barber and cafe buildings were built brand new in 1922, a block from the large Metro Studios.  They must have counted on lots of business from Metro, and been impacted when Metro merged into M-G-M, and moved to Culver City a few years later.  I can find no record of the cafe other than its appearance in these films, and wonder how long it survived.  A full view of the studio appears below. 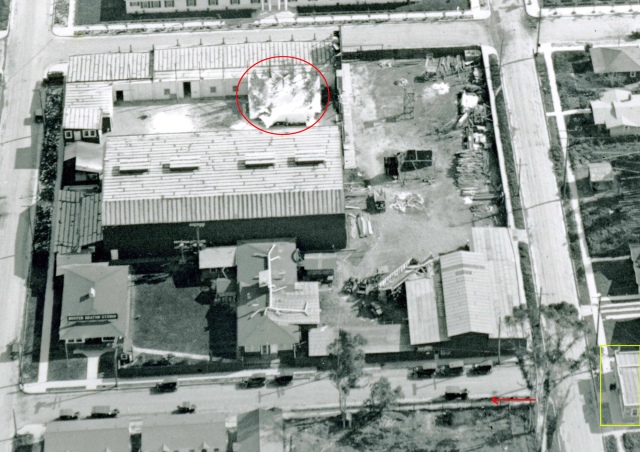 Charlie Chaplin used exterior views of his studio to film scenes (or deleted scenes) from Shoulder Arms, A Day’s Pleasure, The Kid, and A Woman of Paris, and the Bradbury Mansion, and its environs appear in several early Harold Lloyd shorts.  But far more so than Chaplin or Lloyd, Keaton filmed over 40 scenes near and around his studio.  I will be posting more of these new discoveries at a later date.

A view today of the Keaton Studio site.  The commemorative sidewalk plaque in the foreground should be across the street.