Buster and the Three Stooges at the Columbia Ranch – Part 1

As discussed in a prior post, Buster Keaton and the Three Stooges nearly crossed paths early in their respective film careers.  But they definitely crossed paths during the early 1940s when they both made short subjects for Columbia Pictures on the backlot called Columbia Ranch.

Looking towards the gate house at the SE corner entrance to the Columbia Ranch (box), and the eastern-most (and still extant) of twin studio bungalows near the entrance.  Buster appears in General Nuisance to the left, the Stooges in Boobs in Arms to the right. (c) Columbia Pictures Industries, Inc.

Columbia operated from studios located at Sunset and Gower in Hollywood, but lacked backlot facilities to film outdoor scenes.  To remedy this, in 1934 Columbia acquired a large parcel in Burbank at the corner of Oak Street and Hollywood Way, that became known as the Columbia Ranch.  It was here the studio built massive outdoor sets for productions such as Lost Horizon (1937).  Over time other sets were added, and at its peak the Columbia Ranch contained large New York, Colonial, and Western sets, as well as a large lagoon, and a water tank flanked by a 50 foot tall skywall.  A good portion of the original ranch remains in use today, now called the Warner Ranch.

The second of the twin bungalows appears here behind Buster and the Stooges.  Even the tent appears to be similar.  In Buster’s frame you can look beyond the ranch south down Screenland Drive.  The oval marks the water tower on the Warner Bros. Studio lot due south of the Columbia Ranch.

After filming a series of two-reel comedies for Educational Pictures from 1934-1937, Keaton signed to a series at Columbia in 1939.  His next to final Columbia short, General Nuisance (1941), loosely reprises his early MGM talkie comedy Doughboys (1930).  The outdoor scenes were filmed in the SE corner of the ranch, and on the adjacent streets.  The Three Stooges filmed their army boot camp comedy, Boobs in Arms (1940), in the same corner of the ranch. 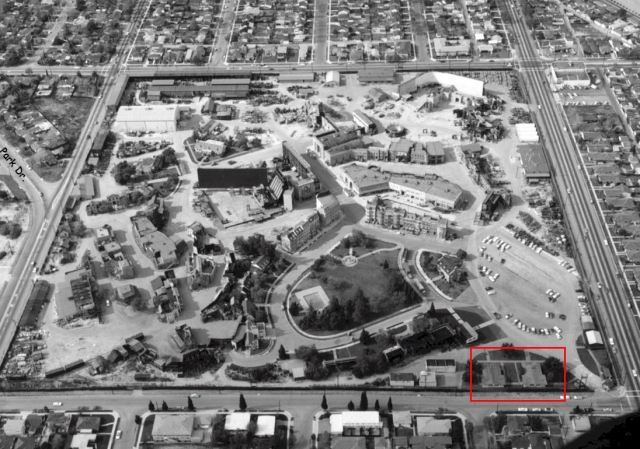 A view north of the Columbia Ranch, from the Mike McDaniel and Wes Clark Burbank history website.  The box marks the twin bungalows appearing with Buster and the Stooges.

The bungalow appearing behind Buster and the Stooges still stands beside the SE corner entrance to the Columbia (Warner) Ranch.  It was (still is?) used for the studio watchman and for storage.  A fire map explains that the other bungalow to the west, now demolished, was used for wardrobe. 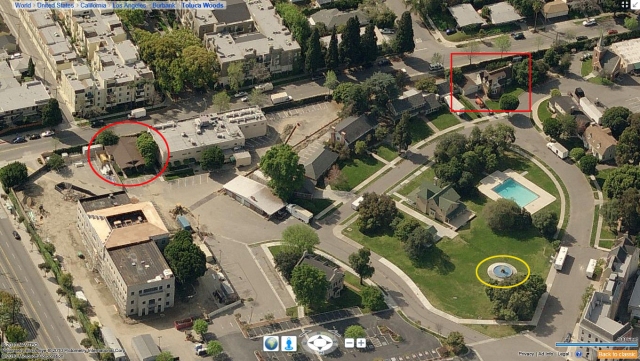 Though beyond the scope of this post, fans of the Three Stooges will find that a great many exterior scenes from their films, in particular those starring Curly, were filmed at the Columbia Ranch, especially around the park area in the SE corner of the lot.

The extant Keaton/Stooge bungalow appears in the background of this scene from the 1970s sitcom The Partridge Family.  The Friends fountain has appeared in dozens and movies and television shows.

Aside from a long history of feature film production, the Columbia (now Warner) Ranch was home to dozens of landmark sitcoms, including Dennis the Menace, The Donna Reed Show, Bewitched, Gidget, I Dream of Jeannie, The Monkees, The Partridge Family, Eight is Enough, and Friends.

In Part 2 I show how Buster filmed other scenes on streets adjacent to the ranch, and how these images also appear with the Stooges.

Jim Pauley’s new book The Three Stooges: Hollywood Filming Locations has dozens and dozens of photos of the Columbia Ranch backlot and the various sets.

For more information on the Columbia Ranch, I highly recommend the unofficial ranch website here.

The frame image from The Partridge Family comes from Kipp Teague’s amazing Retroweb website documenting the great movie studios and studio backlots.  Kipp’s site has hundreds of photos and frame grabs showing where and how classic movies and TV shows were filmed at the various Hollywood backlots, in particular the various sets at 40 Acres in Culver City used for The Andy Griffith Show. You’ll spend hours exploring this fascinating site.